There are some manga you feel only get an English-language release because they win awards. Thank goodness Robo Sapiens won the Division Grand Prize at the 2020 Japan Media Arts Festival, then, because you suspect that if it didn’t, it would not have been picked up, as this title is a strange affair.

You can tell just by looking at the art, even just looking at the cover, that this is no normal manga. The art doesn’t look like that of a typical manga. If anything, it has a European quality to it. Don’t let it put you off however, as this is no criticism of the work, and the stories it tells are deeply engrossing.

Toranosuke Shimada’s manga is a series of thirteen interconnected short stories, detailing the relationships between humans and robots in the future. The series has several recurring characters who appear throughout the book: Aonuma Midori and Ito Sachio are two robots who meet and fall in love while visiting a memorial to the robots who died cleaning the ruins of an exploded nuclear power plant. Ito also works around the world carrying out all sorts of jobs, including vet, teacher and traditional dancer.

Then there are the three “Chrononauts”, a trio of robots designed to carry out missions lasting thousands of years, all designed by the same woman. One robot, named Onda Kaloko, is tasked to look after some spent nuclear fuel until it reaches a safe background level for a period of 250,000 years, with visits from humans becoming increasingly rare as time passes. The other two robots, named Chloe and Toby, are sent into space to look for planets for humans to colonise. Their creator however, has given all three of them an extra secret mission to fulfil.

As mentioned, the artwork is not the normal manga style that most people are used to, but it has its own charming qualities. Shimada’s simplistic and stark background designs are perhaps the best aspect of the art, with its use of geometric shapes and bold fonts.

The storytelling however is the stand-out feature of Robo Sapiens. As the stories play out over hundreds of years, we see humanity rise and decline. A series of three global wars sees the world’s population fall from over 20 billion to just 300 million, out of which only three million are human. While many sci-fi stories about the rise of robots talk about invasion and us being overthrown, in this story it is the robots who are out-evolving the humans. Among the stories featured is one about a man in the early years of intelligent robots who falls in love with one at a time when robot-human marriages are illegal, bringing to mind the struggles that LGBTQ+ people have had when it comes to marriage. By the time we approach the end, robots are leaving Earth altogether, spreading across the galaxy and sharing all information via data, in a form of a robotic transhumanist society.

The translation from Adrienne Beck is generally fine, although there are points when they are quoting songs which are translated by another person, whose credit is squeezed into the top of one page in the middle of the book. However, these points also see some useful lettering changes, with quotations being written in a Romanised italic font. Nicky Lim who does a good job here, also created the visually stunning cover design for the manga.

Robo Sapiens stands out as different in terms of look and writing, and its themes will appeal to those interested in a more esoteric work. If you are looking for something beyond the mainstream isekai fantasies, then it will appeal to you. 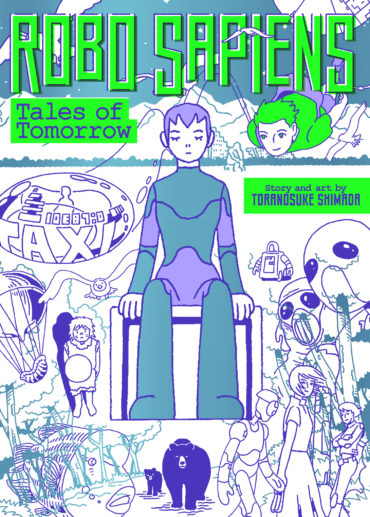