“Only someone who’s willing to risk it all can be called a hero.
Protect your allies. Rescue the ladies. Put yourself on the line.

It’s okay to break, to lose heart, to cry out in pain.

Of all the light novel series that Yen Press publish in English, I think my favourite has to be Is It Wrong to Try to Pick Up Girls in a Dungeon?, or DanMachi (the Japanese abbreviation of the title) which I’ll be referring to it as for the rest of this review. Volume 5 is a big step for the novel series. Not only is this the final book that the anime adaptation covered, it also features one of the biggest challenges Bell has faced yet.

As a general note, this review contains spoilers for the previous four volumes of the DanMachi light novels and the anime series.

It’s safe to say that, as it stands, this volume of DanMachi is my favourite so far. Bell has just reached level 2 (this happened at the end of the previous volume) and thus he, Welf and Lilly decide it’s time to explore the middle levels of the dungeon. The three prepare themselves well for the adventure ahead but, despite how cautious they are, disaster strikes. They’re forced to go deeper into the dungeon than planned, through levels where only experienced adventurers will venture. While the trio manage to make it to a safe space on the 18th floor, it’s unclear if they’ll be able to make it back to the surface alive…

This volume spends a lot of time with Bell’s party within the dungeon but also flips between Hestia, Hermes and some new characters, who are from the Takemikazuchi Familia. It’s nice to finally spend some time with Hestia away from Bell because she’s a much more likable character when not fighting with others for Bell’s affection. Likewise, the focus on Hermes, who we’d yet to learn much about until now, is appreciated as he turns out to be a very interesting character.

After Bell’s party has been absent for numerous days, Hestia puts out a quest requesting that any able adventurers find Bell and bring him back to the surface. Despite it being strictly forbidden for gods to enter the dungeon, Hermes accepts Hestia’s quest after being informed of Bell’s disappearance by Asfi Al Andromeda, a member of his Familia. Upon recruiting some members of Takemikazuchi’s Familia, who were the last to see Bell, he sets off for the dungeon. With so much at stake, Hestia refuses to stay behind and joins up with Hermes and the team for the rescue mission. After reaching the 18th floor and finding Bell, the group plans to follow the members of Loki Familia back to the surface, who had been on an expedition deeper within the dungeon. Unfortunately, the dungeon has other ideas as a floor boss is born and all routes of escape are quickly shut off.

The floor boss is a big stepping point for this series. Not only is it the most powerful monster we’ve had the opportunity to see our adventurers face off against, the story is written in such a way that everything unfolds perfectly. One of the most powerful characters, Aiz, who usually saves the day, is shut off higher in the dungeon and can’t steal the spotlight. Not only that, author Fujino Omori manages to keep Bell’s power in check so that he’s always a sliver away from death and very clearly outmatched by the foe. I feel this is very important both for our hero’s development and likability. No one likes a main character who is, or becomes, overpowered and Bell always treads a very thin line throughout the series for that. While that’s constantly in the back of my mind, this book does a good job at pushing those fears aside. Although other high level adventurers are still present, none of them compare to the level of the boss. The only hope of making it out alive is for everyone to work together.

This battle is the equivalent of the end boss in your favourite RPG; the one that’s five levels higher than you, crushes your hopes at least twice before finally figuring out its strategy and how best to counter it, and that fills you with pride for overcoming such a trial. These are all feelings that Omori has captured perfectly throughout the fight and it’s left me excited for the future of the series.

The action scenes are well written;  Omori clearly has a good grasp of the his characters’ emotions and how to convey them. This battle was perhaps the one I enjoyed the most in the anime adaptation yet in many ways it didn’t have the same level of detail as the light novel. Not only does the light novel convey the battle differently, I truly believe that it works better than the way the anime adaptation handled it. We always have a good sense of where the characters are at any given time and being given the chance to read and imagine the battle, rather than actively watch it, lends some extra sparkle to the whole affair.

Once again the illustrations have been handled by Suzuhito Yasuda, who also worked on Durarara!!, and they hold up rather well overall. The main colour pull-out image for this volume is very fanservice heavy, as it depicts a scene with all of the female cast naked in a hot spring. While it’s a pretty picture to look at, Yasuda’s skills are best displayed in heavy action scenes. Examples of such can seen in the illustrations featured nearer the end of the book. This isn’t really a complaint and more just noting that the selection of art in this light novel isn’t perhaps as good as previous volumes.

Is It Wrong to Try to Pick Up Girls in a Dungeon? continues to impress me and remains as my favourite light novel series at this time. Volume 5 finishes off all of the content that the anime adapted and I have never been more excited to see what’s going to come next for Bell and his party. I’ve enjoyed my time with this and previous volumes but, like Bell, I’m eager to explore uncharted lands and have a brand new adventure. 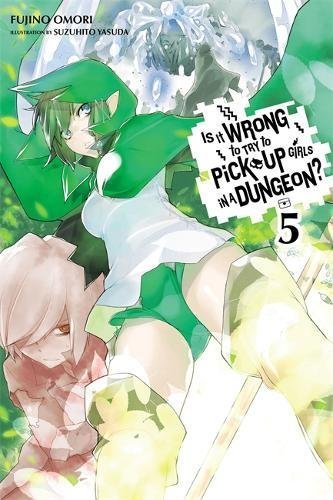