“Only two things are infinite: the universe and human stupidity, and I’m not sure about the universe.” – Albert Einstein

British comedy is full of classic idiotic characters: Baldrick, Father Dougal and Private Pike, to name but three. But they might have their work cut out in comparison to the “clueless girl” Yoshiko Hanabatake, whose manga is now available in English, and who has just been turned into an anime.

Yoshiko is a complete and total idiot. It’s a miracle she is even alive. She gets zero on all of her tests, and rather than trying to study any harder, she thinks there is no point and would rather do something fun, which normally involves playing games or eating lots of bananas. Her best friend, Akuru “Akkun” Akutsu, is completely the opposite. He is always scoring highly on tests, but never quite gets 100% to his frustration. Perhaps the reason for failing to be perfect is that he has to spend so much time stopping Yoshiko getting into trouble, or just has to try putting up with her bizarre behaviour.

Akkun often tries to force Yoshiko to study, but often he just rules her to be a lost cause. Yoshiko’s mother meanwhile, Yoshie, seems to think the best hope for a decent future is for Yoshiko to marry Akkun, but that’s mainly because then Yoshiko will be off her hands.

Despite her stupidity, Yoshiko is able to make some friends, like Sayaka Sumino, the kind girl who sits in front of Yoshiko in class who worries that she might be a bit dull; and Ryuichi Kurosaki, a delinquent who becomes friends with Yoshiko because when they first meet, she doesn’t realise how dangerous he is and shows him kindness, Yoshiko being the first person to do something nice for him. More troublesome for Yoshiko are the school’s unnamed hall monitor, partly because Yoshiko keeps playing with her big breasts and partly because she starts to fall in love with Akkun; and Akkun’s younger sister Ruri, who like Yoshiko is also slow educationally, but unlike Yoshiko is making an effort to improve herself and thus thinks Yoshiko is a bad influence.

Being a four-panel yonkoma manga, it takes a while to read Aho-Girl, but it’s worth it. This is a really funny manga because Yoshiko is such a daft character while Akkun makes for a brilliant straight-man. Yoshiko is a girl who thinks her best option for a successful life is to marry someone, and to encourage this by showing her underwear to Akkun; a girl who thinks that the best way to get around a tricky maths problem is to ignore and play dodgeball; a girl who is happy to ignore signs saying: “Do not open unless you want to die” and thus getting electrocuted; but is still happy to celebrate when she does manage to get things right – like knowing that 2+5=7.

But having read the manga, it did make me laugh a lot, and I look forward to the anime as well. 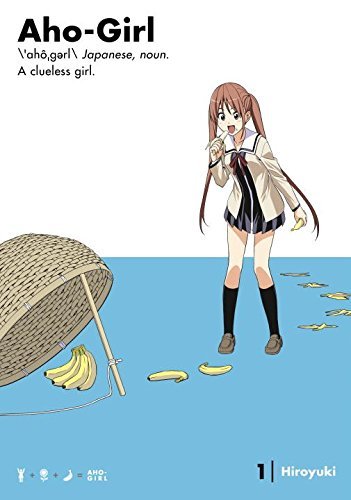