When it comes to how the anime industry works, I’m always eager to learn more. Over the years I’ve learned a lot about the industry from series like Shirobako and Bakuman, which tackle the subject in fun but realistic ways. Now here to offer another fascinating look at the topic is the novel Anime Supremacy! from award winning Japanese author Mizuki Tsujimura – but does it live up to my high expectations?

Anime Supremacy! tells the stories of three women working different roles in the anime industry: a producer, a director and an animator. Through the course of their stories we experience the challenges that crop up when creating an anime series as they aim for the title of ‘Supremacy’ – a term given to the very best anime that season, either in sales or from the buzz surrounding it. In such a stressful industry with tight deadlines, we’re offered a glimpse into what drives the characters’ passion.

The book is composed of four chapters, one for each of the different cast members, and a short wrap-up. The characters’ tales all open the same way: with a monologue from the girl they’re focused on, explaining how they answer the question “Why did you get into the anime business?”. Their answers then feed back into the story, letting us see a snippet into their working days and where their passion comes from until we come full circle to a satisfying conclusion.

In our first story we’re introduced to Producer Kayako Arishina, who fell in love with anime as a child. However, after working in the anime industry for a few years, her ‘critical thinking’ leaves her cold and unable to fall helplessly in love with anime as she once did – that is until the day she watches the latest work from a young genius director known as Chiharu Oji. Almost a decade ago he revolutionized the magical girl genre and captured Kayako’s imagination. Now nine years later Kayako is set to work with Oji on his latest work, but will the director be everything she hoped after idolizing him for so long?

The second story follows Director Hitomi Saito, who comes from a poor family and never watched anime during childhood. She sets her sights on obtaining a government job until the day a college friend lends her a copy of the animated movie Butterfly. The movie strikes a chord with Hitomi and she then learns everything she can about anime and the industry, eventually working her way to the position of director. Now about to embark on a huge adventure in directing a children’s mecha series and competing with Chiharu Oji’s latest work, Hitomi has a lot to prove both to the industry and herself. Can she create something that resonates with people as much as Butterfly did with her?

Our final story focuses on animator Kazuna Namisawa, who disregards real life and adores her job. When ‘normal’ people talk to her they always regard her as a ‘geek girl’ or ‘female otaku’ with no ‘real’ life in sight, but Kazuna doesn’t care. If being able to do this job means she has to suffer hurtful opinions, then Kazuna is fine with it. Currently she has the chance to work on both Chiharu Oji and Hitomi Saito’s latest works, but on top of that she’s suddenly tasked with working on an anime-pilgrimage for Saito’s work, Sabaku. An anime-pilgrimage is when a tourism board works with an anime studio to create a map or guide to their town, showcasing various locations that were shown in the anime (this also usually involves a stamp relay with a prize at the end). To make matters worse for Kazuna, to create the pilgrimage, she is paired with Shuheo Munemori from the Enaga City Tourism Section – who hasn’t the faintest clue about anime! He’s the type of person that Kazuna typically stays miles away from but perhaps their meeting is fate…

The author, Mizuki Tsujimura, has written a really outstanding book here. Not only is Anime Supremacy! a fascinating look at women working in the anime industry, it’s also filled with useful information about how the business works. It is worth keeping in mind that Tsujimura does not work in the anime industry, and as well researched as the book is (studios such as Production I.G, Toei Animation and Aniplex are listed in the acknowledgments) it’s very possible that not everything is true to life. Overall the book is incredibly well written, no doubt helped by Deborah Boliver Boehm’s excellent translation – which is problem-free. This is nice to see after the issues with the latest Monogatari releases from publisher Vertical.

There are some illustrations dotted throughout the book for each chapter start but I can’t find who they’re drawn by. The back cover of the book credits Hwei Lim for the front cover illustration so I’m going to assume they are also responsible for the other images, which are all fairly low-key affairs but look nice enough. It’s worth noting that in Japan the book was illustrated by CLAMP, so the images on offer here are replacements.

Anime Supremacy! was near impossible for me to put down day to day. The book sparks my own love for anime and reminds me why I fell in love with (and continue to be in love with) the medium. The only real drawback that prevents me giving it full marks is that someone less familiar with the anime industry and lacking knowledge in the fundamentals of how it works is not going to have as much fun reading it as I did. There are a number of exchanges between characters and situations that would prove difficult to follow if you don’t have a basic understanding of what’s going on and why. What I’d recommend is that you watch P.A Works’ Shirobako series first, and if you come away having enjoyed that then you’ll definitely get on with this book.

With a huge collection of light novels to keep up with, I currently don’t read many full-length novels, but Anime Supremacy! has proven itself a must-read for an anime fan like myself. Well  written, informative and charming – this is one of the best industry-focused novels to leave Japan recently. Without a doubt if you’re someone who cares about the workings of the anime industry then this book belongs in your collection. 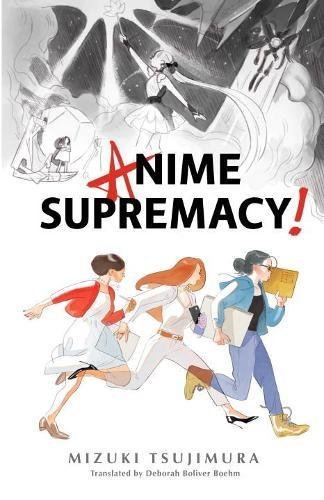 Sherlock Holmes: A Scandal in Japan is a compelling story showcasing the world’s most iconic detective. Author Keisuke Matsuoka does the character great justice in this tale revolving around an unforgettable incident that readers will be engrossed in from start to finish.

Masquerade and the Nameless Women Review

Masquerade and the Nameless Women offers everything I could want from a mystery novel. With a satisfying story, believable characters, and compelling twists and turns, this book is a real page-turner.