If I mention light novel distributor J-Novel Club, the first thing that’ll likely come to mind is their impressive collection of isekai titles. However, recently the company have broken out of the genre and expanded into other territories, one example of which being the fantasy romance series An Archdemon’s Dilemma: How to Love Your Elf Bride (or Elf Bride as we’ll be referring to it going forward). Today I’m here to review the first volume.

Our story follows the powerful sorcerer Zagan. Feared by the masses for his foul mouth and brutal actions towards those who trespass in his domain, Zagan spends his days isolated from the world and studying sorcery. One day he’s invited to a dark auction by his only friend, Barbatos, and there he finds an elven slave girl being auctioned off. It’s love at first sight for Zagan, who wishes for the girl, Nephy, to become his bride.

Pouring his entire fortune into buying her, Zagan takes Nephy home – but Nephy is convinced that Zagan purchased her with the intention of killing her in some kind of experiment! Zagan isn’t used to being around people and so struggles to convey his feelings to Nephy, which makes her even more certain that her end is near. Muddling through his thoughts, Zagan must learn how to put the girl’s mind at rest and communicate the love in his heart!

It’s fair to say that Elf Bride sets itself up with an off-putting premise. The fact that our protagonist buys his (hopefully) future wife at an auction is almost certainly going to put many people off giving Elf Bride a chance, but hear me out. Although Nephy is sold as a slave, wearing a mana suppressing collar around her neck, Zagan immediately commits himself to finding a way to remove it so that he can give Nephy the choice of being with him or living her life freely elsewhere. He wants her to have freedom, and that’s a really important part of this story because Elf Bride isn’t some slave wish-fulfilling romance. Instead Elf Bride’s a more pure and sensitive romance that’s easy for the reader to get behind.

For all the talk of Zagan being evil, he’s largely misunderstood. It’s true that he has no patience for people trespassing in his domain, but after spending time with Nephy, he’s more reluctant to kill people. Instead he threatens most of the intruders until they run away screaming, which is a much more friendly approach. Throughout the first volume Zagan’s personality definitely softens, thanks to Nephy, and he begins to involve himself with others just a little bit more. As the series continues I’m hopeful that we’ll see much more of this kind of growth and I’m really looking forward to seeing it.

Nephy is also a well developed character. To begin with, she’s totally lifeless, having resigned herself to death at the hand of whoever buys her at the auction. However, once Zagan finally convinces her that he has no intention of killing her, Nephy begins to open up and regains a spring in her step. She’s still a quiet character but as the story progresses she begins to tease Zagan and happily live in and fix up his castle while also making friends in the nearby town. Like Zagan, Nephy obviously has a lot of development in her future, but it was nice to see that even just within Volume 1 she transformed from a meek and agreeable shell to someone with strong thoughts and feelings of her own.

Of course, the core focus of Elf Bride is the romance between Nephy and Zagan. This progresses slowly and doesn’t truly develop until close to the end of the first volume (especially given just how socially awkward Zagan is), but I think given the set-up, this was the right move. Had Zagan been too forward I worry that it would have read like Nephy was forced into falling for him, but instead they become closer much more naturally.

I think it’s fair to say that, for me, author Fuminori Teshima has crafted a captivating and cosy romance series. After the initial four parts J-Novel Club released on their site for Volume 1, I was completely hooked and anticipating the weekly releases. The characters being well written and the heartwarming romance weren’t the only aspects drawing my attention, though; there is also a small amount of world building dropped in here and there. Overall I think Teshima has done a great job with this book.

Illustrations for the series have been handled by COMTA, which are well drawn and portray both Zagan and Nephy as cute and likable characters. Quite a bit of detail has been put into Zagan’s design, who sports an ‘arabian nights’ feel. Nephy’s design is rather simple in comparison but certainly has had a lot of work put into it in order to convey her adorable personality. Again, a great job done here.

This release comes to English thanks to J-Novel Club, who are releasing Elf Bride digitally. The ebook release includes four short stories, as well as some colour illustrations, which are not available through the prepub release on J-Novel Club’s website. Translation for the series has been handled by Hikoki, and while there were issues with it for the prepub releases it looks like these have been fixed for the ebook. My only minor complaint is that one of the opening colour illustrations has text that gives away a fairly major plot point for this volume. The original text for the Japanese version didn’t mention the spoiler, so this was an avoidable issue.

Overall Elf Bride offers a heartwarming and outright adorable story. The initial set-up might put people off but the series is determined to make Zagan and Nephy’s relationship pure rather than something born of master and servant. Those of you in the market for a new fantasy romance need look no further than here. I’m looking forward to seeing where the story goes next. 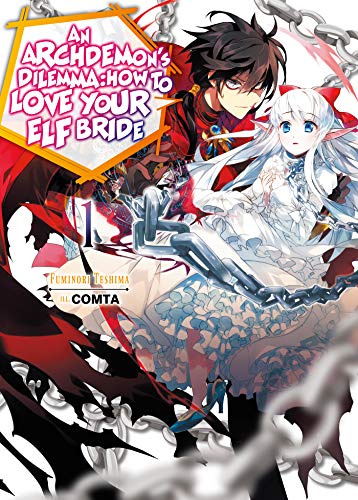 Title
An Archdemon's Dilemma: How to Love Your Elf Bride

An Archdemon’s Dilemma: How to Love Your Elf Bride Volume 6 Review

While this volume of An Archdemon’s Dilemma: How to Love Your Elf Bride has interesting development in story for one of its main cast – it also retreads on an earlier plot device which takes away from the book.

An Archdemon’s Dilemma: How to Love Your Elf Bride Volume 4 Review

With a shift in structure and some solid character development, An Archdemon’s Dilemma: How to Love Your Elf Bride Volume 4 successfully brings me back onboard.

An Archdemon’s Dilemma: How to Love Your Elf Bride Volume 5 Review

An Archdemon’s Dilemma: How to Love Your Elf Bride Volume 5 is a compelling entry in this romantic fantasy series. Offering a fresh perspective on some of our favourite characters thanks to a shift in focus means this volume delivers a unique story the likes of which I hope we see more of in future.

An Archdemon’s Dilemma: How to Love Your Elf Bride Volume 7 Review

Volume 7 of An Archdemon’s Dilemma: How to Love Your Elf Bride gives us the chance to take a break and catch our breath as the cast enjoy some time at the beach. It’s not the best book in the series but it’s still a great deal of fun, provided you like the cast.