The mangaka behind Eisner-nominated series Wandering Island, Kenji Tsuruta, is back! Teaming up with the winner of the Nihon SF Taisho award, Shinji Kajio, the two have created Emanon. The manga promises a whimsical look at what it means to carry memories with you from the beginning of time, but does it deliver? Let’s find out!

Emanon takes place in 1967 and follows the story of an unnamed man, who is nursing a broken heart on an overnight ferry ride back home. He sits beside a beautiful girl, who pretends he’s her husband when some drunks begin bothering her. To escape the situation she invites him up onto the top deck and the two end up having dinner together. There the girl tells the man her name, Emanon, which, when reversed, spells ‘No name’. Emanon tells the man, who has a love for science fiction, that she has memories going back to the beginning of time. Memories that stretch back three billion years. It’s up to the man to decide if he believes her tale or not, but with nothing better to do he listens to Emanon, captivated by what she has to say.

Usually I’d have another paragraph describing the plot but what I said above is largely all there is to Emanon. As Emanon describes her unusual situation to our protagonist, we get to see that she’s telling the truth – even if it’s an unbelievable story. After she finishes her tale, the two make merry, drink and talk the trip away, parting ways afterward. It’s a manga of few words, instead choosing to convey the story through imagery and only resorting to dialogue for elements that can’t be explained otherwise.

The problem I had with Emanon is that this first volume does little to sell me on the premise. Emanon as a character is whimsical, disappearing as quickly as she arrives, but beyond her three billion years of memories there is very little to her personality. The protagonist, too, is very bland and feels like someone for Emanon to monologue to rather than being his own character. He also doesn’t seem to be sticking around for Volume 2, which takes away any interest I might have had in him.

The idea that Emanon has memories dating back so far could have been interesting, but the manga just doesn’t do enough with it. Apart from Emanon’s discussion with the man, there is no real hook. Are we supposed to be interested in seeing how she lives her life in the future, or in what she’s done in the past? Is there actually a purpose to any of this? There are too many questions and not enough answers, which isn’t acceptable for a series with nothing else going for it but Emanon’s memories.

Story and character issues aside, I like the way the manga is presented. The panels flow well and there are a lot of pretty two-page spreads and beautiful colour pages (placed at the front and back of the book). I’m quite fond of when manga ditches dialogue in favour of showing us emotions and actions through the artwork instead, so Emanon scratched that itch handily. Characters are expressive and drawn realistically rather than fitting into the modern day ‘cute’ look that many mangaka go for. It’s not quite enough to make up for how lacklustre everything else is, but it made the read not completely worthless.

Emanon comes to the West thanks to Dark Horse and has been translated by Dana Lewis. The translation reads well and there’s a very in-depth afterword to this volume from editor Carl Gustav Horn, where he talks about how this book came to be and some of the translation choices made. If you’re interested in the production side of things, then it makes for an interesting read!

Overall, I come away from Emanon unimpressed. It’s hard to discern what the point of the story is, and ultimately it doesn’t do anything to make me want to read more. With characters who feel like they’re no more than audience substitutes and too many unanswered questions, I just don’t recommend this one. The artwork is the only saving grace and even then it’s not enough to sell me on the idea of more. 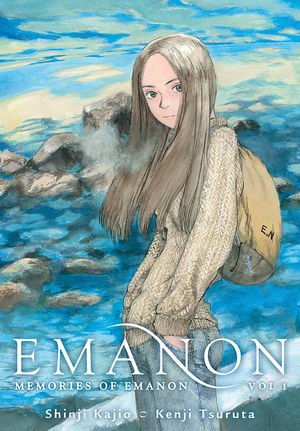