Warning: Contains spoilers for those not familiar with the series already.

Regular users of Anime UK News might be aware that certain writers cover certain series. Normally, I am Anime UK News’s One Piece reporter. Having said this, while I read the manga and watch the TV anime, I’ve not watched any of the films before. My view has generally been that films based on long-running anime like this are just filler that you are paying extra for, rather than something based on the content of the original manga. So, what did I make of One Piece: Stampede?

This 14th film in the One Piece franchise, marking the TV anime’s 20th anniversary, begins some years earlier, with Blackbeard freeing up pirates in the prison of Impel Down. However, there is one inmate in the hellish depths of Level 6 that he decides not to take with him. Back in the present, the Straw Hat Pirates are visiting Delta Island, where the world’s greatest festival organiser, Buena Festa, has organised “Pirate Fest”, a celebration of all things to do with pirating. Not only are Monkey D. Luffy and his crew there, but so are just about every other major pirate crew in the series.  It’s not just pirates there too: Marines Smoker and Tashigi are also working undercover on the island. 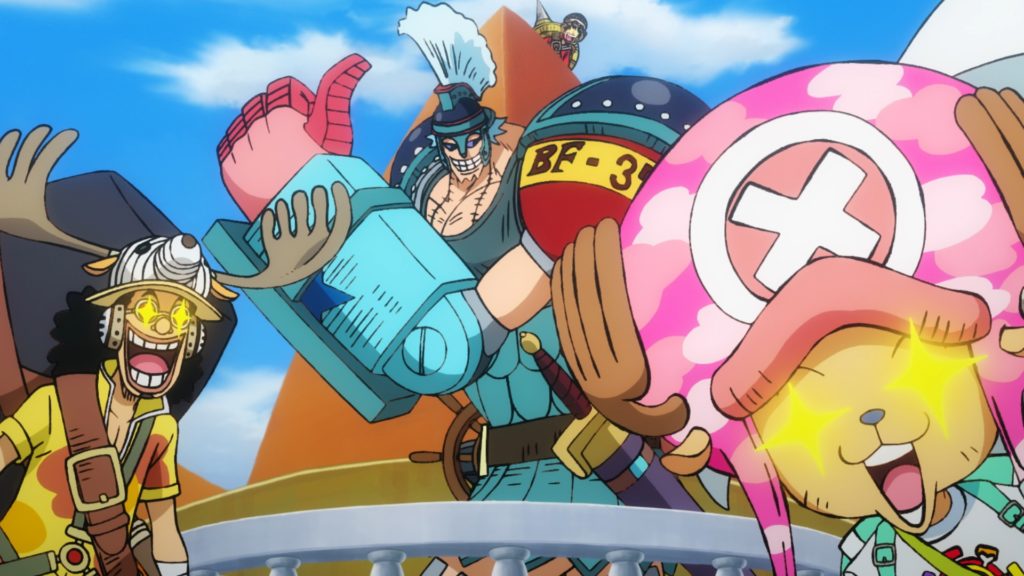 Among the events being held on the island is a race up a “Knock-Up Stream”, a vertical column of water. At the top of this is a floating island where Gol D. Roger hid some treasure, including what is speculated to be the “One Piece” itself, the greatest treasure of all. As they prepare to race, the Straw Hat Pirates finds there has been a stowaway on the Thousand Sunny: Trafalgar Law. Trafalgar, who managed to escape the festival’s security (organiser: Buggy the Clown), tells them that something dangerous is going on. Thus Sanji, Nico Robin, Chopper and Brook go with Trafalgar to investigate while Luffy, Zoro, Usopp, Nami and Franky concentrate on the race.

As the race reaches its climax and the contents of a particular chest containing something relating to the One Piece become clear, Luffy ends with a new foe to face… the foe that Blackbeard did not take. His name is Douglas Bullet, he is a former member of Roger’s crew, and Festa is using his desire to become the strongest person in the world for a dastardly and incredibly destructive evil plan. 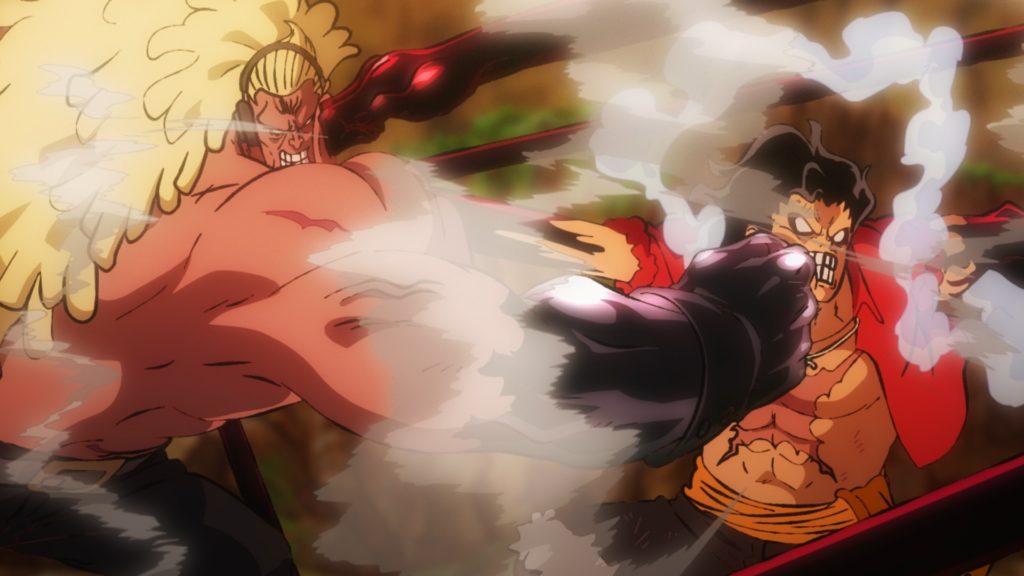 The first thing to say is this: I definitely plan to go back and watch the other 13 films, because if they are as fun as this, it should be worth it.

Secondly, for One Piece fans, perhaps the main joy is seeing just how many of the characters that appear throughout the course of this 20-year-long anime appear in this 100-minute long film. The list of major characters who don’t appear is probably shorter than the list of characters that do feature. To give you some idea, aside from the characters already mentioned in this review, there is also just about every crew that make up “The Worst Generation”, including Eustass Kid, Basil Hawkins, Capone Bege etc., the several other pirates appear such as Cavendish and the Foxy Pirates. Plus there are the Navy and Marine forces, with just about every senior member cropping up at some point. The several (but not all of) the Warlords of the Sea appear, plus members of the Revolutionary Army and Cipher Pol, and, thanks to the Devil Fruits, some ghostly appearances from characters no longer alive.

Indeed, the list of people credited in the film is a long one, but still has some interesting people that crop up. One is the actor Toshio Furukawa who plays “???”. Who knows what that could mean, but it is something to ponder over regarding the future of the series. 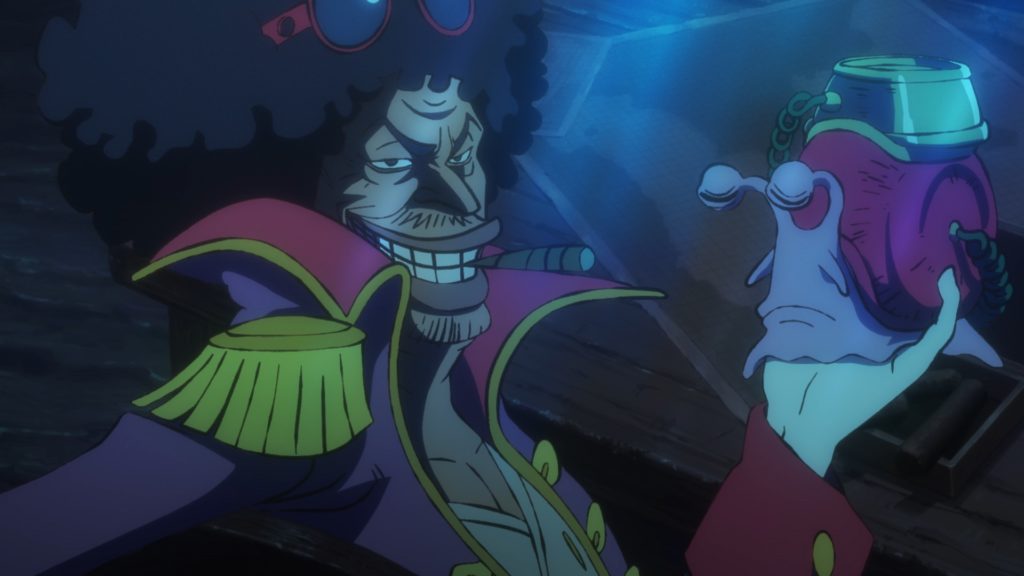 The other big draw to the film is the quality of the action and animation. Takashi Otsuka’s direction is visually stunning, and the big battles are as grand as any fight on the Grand Line. The main one is the duel between Luffy and Bullet, particularly when Bullet shows of his own Devil Fruit power: one that allows him to combine with inanimate objects. Thus, when he reveals his ship full of weapons and combines himself with it, turning himself into a kind of living mecha, things becomes dramatic. It starts picking up elements of anime like Gurren Lagann in terms of scale and size of foes.

It is also in these fights where it seems like some of the weaker characters show off their strengths, while characters who are normally enemies unite to attack a greater menace. While some may criticise the writing for not being at all sophisticated – examples being a scene where Brook spies on someone by releasing his spirit as a fart – it is when the weakness of some characters are overcome that help to redeem the writing. The Japanese voice performances appear to do the script proud, with Tsutomu Isobe (Monster, Black Lagoon, Memories) bringing considerable energy to the role of Bullet. The review copy I was given only featured the Japanese dub so I cannot make comment on the English dub, but the film is being released in English, where Bullet is voiced by video game voice actor Daman Mills.

Stampede is a fun, wild ride, and any fan of One Piece should find it utterly enjoyable. Anyway, now to the matter of watching another 13 films… 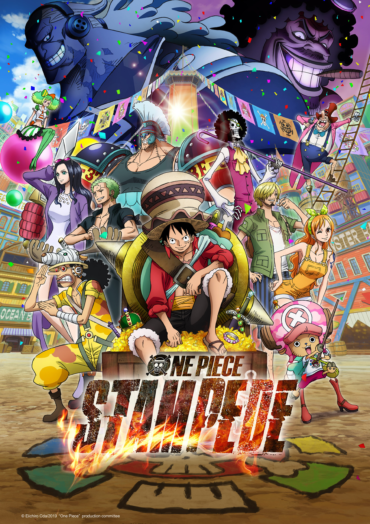