Kiyoshi Adachi is a salaryman who has just quietly been getting on with his life – until he reaches his thirtieth birthday and finds that he can hear the thoughts of other people he touches! It seems that if you can stay a virgin until you reach the age of thirty, you become a wizard and acquire this unexpected power. Not only does this ability make his journey to work and back by crowded subway almost unbearable, due to the cacophony of other people’s thoughts, but he also realizes that his good-looking, talented co-worker Kurosawa has fallen for him. He’s not supposed to know, of course, but every time the two are together, Kurosawa’s lovestruck thoughts spill over and shy Adachi just doesn’t know how to react. (Kurosawa has no idea!) And when, after a late-night work session, he misses the last train and agrees to go home with Kurosawa, it looks as if things will take a steamy turn…

Or will they? Is Kurosawa more thoughtful and considerate than his inflamed thoughts suggest?

Confused, Adachi turns to his college friend Masato Tsuge, a romance novelist, for advice. Surely he’ll be able to advise him what to do? But there are some surprises for Adachi there as well, only adding to his confusion.

Cherry Magic! is the first manga by Yuu Toyota to receive an English release and it’s heartening to see that the new Square Enix Manga list is not averse to adding a BL title to its wide range of genres – and a sweet and charming one too. (It’s interesting to note that this is her first BL title; the rest of her output is shojo and seinen.) The mangaka’s graphic style is somewhat idiosyncratic and takes a little getting used to. The main protagonists are not the conventional bishonen of many BL. That said, she conveys the interactions of her cast by an effective marrying of the thoughts that Adachi can read in other people and the shifting facial expressions. And for those readers who enjoy BL about men in suits, this makes a pleasant change from high school boy romances! Adachi’s thought-reading predicament and his shy temperament means that this relationship is going to develop – or not – as a slow burn and that’s no bad thing in terms of character growth and an enjoyable read.

When it comes to the slightly flimsy supernatural/magical mind-reading element on which the story depends, the mangaka herself has added (after Chapter 1) this slightly tongue-in-cheek let-out clause: ‘I got a lot of letters pointing out that if people who were still virgins at thirty turned into wizards, there would probably be a lot more wizards around. I vaguely suspected as much myself. Please just think of it as a whim of the goddess of love.’ (This is matched to a little sketch of the goddess bestowing her gift on another unsuspecting mortal.)

This is the first of three volumes in an ongoing series and the Square Enix team have given it a very attractive edition with excellent quality white paper and a colour page at the front. The slick translation by Taylor Engel makes for an enjoyable read (there’s a helpful page of translation notes) and praise should also go to letterer Bianca Pistillo for delivering the many different communications (thoughts and asides from the mangaka, as well as speech bubbles) so clearly. The chapters are on the short side and there are plenty of little extras, some devoted to novelist Tsuge as well as the main pair. There’s also a trailer for Volume 2 and a few pages of Chapter 6 as a taster. I was puzzled, however, by the fact that my review copy came with the age rating of ‘M’ for mature on the back; on the publisher’s site it’s described as OT, which seems totally appropriate for this volume in which nothing remotely meriting an ‘M’ takes place. As Kurosawa protests at the end of the Author’s Note, “But we hardly did anything in Volume 1!!!” I have it on good authority that things hot up in later chapters…

Cherry Magic! is a pleasant surprise, a gentle and cute romantic comedy told with a light touch; there’s something rather endearing about two 30-something salarymen’s mundane lives being transformed by a sprinkle of magic.

Read an extract from Cherry Magic! at the publisher’s website here. 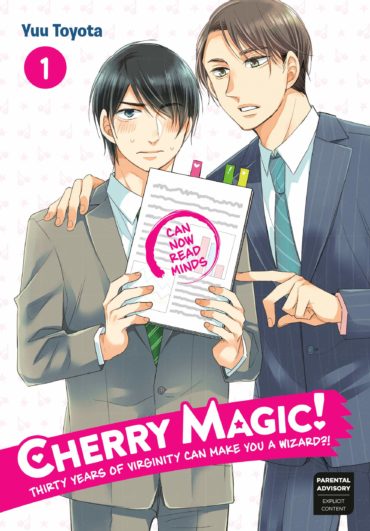