Since publisher Square Enix Manga entered the English market they’ve brought them with a varied selection of titles. The latest is the shonen adventure The Strongest Sage with the Weakest Crest, which promises to be a fun-filled fantasy tale. Does it deliver? Let’s find out!

The story follows Mathias, who was the world’s most powerful sage in a past life. However, in this past life, Mathias was held back by the power of the ‘Crest’ he was born with, so he decided to magically seal his soul and be reborn in the future.

When Mathias regains his past life’s memories, he’s in the body of a six-year-old with the Crest he so desired, but the world has changed drastically since his reincarnation and now his Crest is regarded as one of the weakest!

Despite this, Mathias realises that it’s not that his Crest is weak but that the level of swordsmanship and magic has decreased and no one seems to know how to make use of the power they’re granted. Determined to prove himself, our hero throws himself into studying to learn as much as he can about the current world and to reclaim the title of Strongest Sage.

In this world, there are four different Crests you can be born with: the Crests of Might, Creation, Rapid Fire or Close Combat. In his past life, Mathias had the Crest of Creation which is a support Crest for use with spells outside of battle. His current Crest is the Crest of Close Combat which combines the rapid firepower of the Rapid Fire Crest and the sheer power of the Crest of Might. It’s an incredibly powerful combination, but it takes a lot of work to be rewarded with its true abilities.

As Mathias trains his skills with the sword and magic, he quickly becomes one of the best fighters in his home village. Once he reaches the age of 12, his family recommends he try out the exam for the Second Royal Academy. If Mathias passes the test, he’ll be able to leave the village behind and broaden his horizons, while also studying to become even more powerful.

I’m sure you’re wondering by now why Mathias desires to be the strongest sage and so far, I’m honestly not sure. At the beginning of the book (before his reincarnation) he talks about wanting to defeat the monsters in outer space but I’m unsure if that’s because they’re a threat to humanity or if our protagonist is just a battle-loving idiot.

Because this manga is an adaption of an ongoing light novel series, his motivations will probably be explained in future volumes (as it’s likely discussed in the latter half of the original book) – but until then we’re left in the dark.

As far as the plot goes, otherwise, it’s fairly similar to Wise Man’s Grandchild (minus being an isekai). They’re both stories revolving around a character harbouring strong abilities that outclass everyone else around them and going on to join an academy. It’s a fairly generic set-up, but ultimately the cast and artwork make the manga well worth reading.

The series has been adapted into a manga by team Liver Jam & POPO (Friendly Land), who offer attractive character designs, expressive artwork and some impressive battle scenes. Backgrounds are fairly empty most of the time, but this helps emphasize the feelings of the characters in any given moment (and helps hammer in the more comedic scenes). Battles are easy to follow and very striking; it’s easy to imagine how they’d transition into an anime. I was surprised to find the series hasn’t been granted one yet, since both it and the original light novel seem popular in Japan.

It has been a while since I became so endeared to a manga so easily, but I found myself grinning from ear to ear by Chapter 2. While it might not do anything original, I found it great fun. It’s easy to root for Mathias as the protagonist and become engrossed in his story. Even with a few unanswered questions, I have faith that the fun factor will overcome any small niggles with the story (I hope we learn more about the monsters in space though…).

As previously mentioned, this series comes to the West thanks to Square Enix Manga and has been translated by Caleb D. Cook. The translation reads well with no issues to speak of. The series is ongoing in Japan at 11 volumes and Square Enix has Volume 2 scheduled for release in October.

Overall, The Strongest Sage with the Weakest Crest proves a highly entertaining read with some impressive artwork. While there are unanswered questions as to why our protagonist wanted to be reincarnated in the first place, it’s hard to deny that the fun the manga offers outweighs this minor detail. If you’re a fan of overpowered protagonists stories or Wise Man’s Grandchild, this is certainly worth a read. 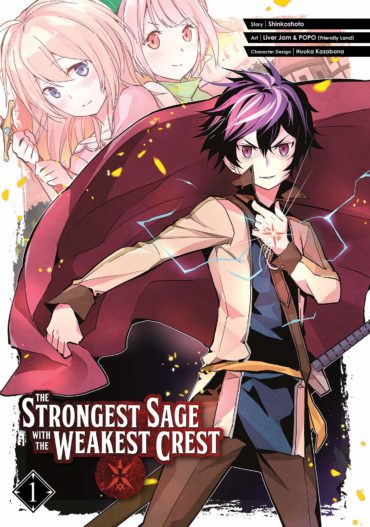 Title
The Strongest Sage with the Weakest Crest Volume 1