The series was adapted into an anime in 2020 to positive reception, and this second volume focuses on Minare continuing to forge a career in radio that is interrupted by an unexpected reunion.

Where we last left the story, Minare had accepted a job from producer Kanetsugu to host her own radio programme, allowing her to showcase her eccentric and often erratic storytelling style.

As Mizuho’s birthday is celebrated, Kanetsugu reveals his plans to get rid of the segment structure for the show and instead utilise Minare’s spontaneity by having the upcoming show be Real-Time Fiction.

A notable example of this that the manga references is Orson Welles’ infamous War of the Worlds – a form of radio drama that involves taking a fictional event and broadcasting it as it’s happening in real time.

With a bit of convincing and praise, Minare roars into action, weaving a story about her ex, Mitsuo, coming back into her life only for it to end in tragedy as she stabs him in a moment of rage.

In an interesting bit of irony, the manga intersects this storytelling with cutaways to an actual situation wherein a domestic occurrence seemingly showcases a woman preparing to kill a man who is bound and gagged. This is all staged in darkness – a stark contrast to the well-lit radio station recording studio, and the reader is left (literally) in the dark about what exactly is happening.

Minare’s show is, once again, a success and we see the internet buzz that the broadcast causes, with patrons at Voyager (the restaurant Minare works for) recognising her voice and complimenting the effectiveness of the storytelling. It’s one of the early tastes of real-world recognition she receives and Minare strives to become the number one DJ in Hokkaido.

This is where the volume takes a different path as Minare receives an unexpected text from her ex, Mitsuo, asking to meet up some time after their break-up. At first, Minare is reluctant to meet him yet also dresses up and even ponders on wearing the lipstick he likes.

As they reunite, she notes internally how little he’s changed – Mitsuo quickly comes across as a bit of a carefree scrounger and keeps Minare on edge for much of their date but he slowly worms his way back into her good books as he’s seemingly changed his ways, paying back most of the money he owed and sweet talking Minare over dinner.

They reconvene to his apartment and just when it seems like he’s fooled Minare, it soon becomes apparent that there’s trickery afoot. I won’t spoil exactly what happens but it’s perfectly in character with the Minare we’ve come to know so far and is a reassuring end to her potentially going back into a problematic relationship.

Of course, this is Wave, Listen to Me! so the volume couldn’t end without some more radio show-related antics. First of all though, we get an appearance from Makie, a fellow employee at Voyager who is currently staying with Nakahara and has an apparently troubled relationship with her brother.

She briefly confronts Minare about being so casual about her recent meeting with Mitsuo but Minare, as sharp-tongued as ever, promptly reports about their living arrangements. It’s a development that I hope the manga will delve into more in future volumes as Makie is currently a bit enigmatic from a character perspective.

The volume concludes with a bizarre new radio show involving two acclaimed sound designers, Pigsy and Chimpy, who get involved to give the broadcast a fresh soundscape, weaving the plot of a woman burying the body of her dead estranged lover. The final chapter ends on a cliffhanger within a cliffhanger that humorously leaves you wanting to see how the show will progress.

This second volume continues to build upon Minare’s development as she overcomes issues both in her personal and working life. The story begins to also shine a light on the supporting cast with Makie in particular being a character to look out for in future volumes.

Mangaka Hiroaki Samura continues to accentuate the story with distinct and often wonderfully detailed character designs, especially for Minare who remains as expressive as ever, dealing with some more personal emotional stakes this time around. Other characters like the acclaimed sound design duo Pigsy and Chimpy are fitting caricatures and artistic choices like the lighting mentioned earlier on were nice touches also.

This second volume has been translated once again by Adam Hirsch and Jiajing Sun. We again get several pages’ worth of translation notes that are a wonderful addition in providing the reader with a better understanding of various references within the volume that Western readers may not immediately understand.

In summary, Wave, Listen to Me! Volume 2 is a great continuation that continues to focus on Minare’s personal developments whilst also shining a light on the goings-on for some of the supporting characters and their situations that I hope will see more developments soon! 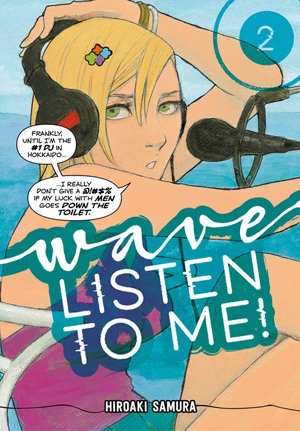