Familial bonds, or the lack thereof, are a frequent driver of narrative in works of fiction, with story, characters and ideas often inspired or directly based upon an author or auteur’s own personal experiences.

A Journal of My Father was originally released in 1995 in Japan and is now being made available in 2021 by English publisher FANFARE in collaboration with Spanish publisher Ponent Mon. Throughout the manga, Taniguchi gives frank insights into his own personal experiences, in a self-contained storyline told across twelve chapters.

My previous experiences with Taniguchi’s work came from Sky Hawk, another self-contained story and engaging Western which featured likeable characters and a bittersweet plot. A Journal of My Father maintains this level of quality, albeit feeling more personal.

The plot centres around Yoichi Yamashita, a man who one day receives a phone call that his father, Take, has passed away. His reaction is almost indifferent, with his partner having to encourage him to make the journey back to his hometown to attend the funeral and wake.

Within just a few pages we learn that Yamashita’s relationship with his late father was strained due to a divorce, and that he hadn’t visited home in around 15 years.

From the moment Yamashita steps off the plane, we follow his journey, exploring Tottori, the place he once called home, musing via inner monologue about what aspects of his home have remained the same despite the passing years. This is paired with Yamashita’s childhood memories resurfacing, the first revolving around the sudden disappearance of his mother following the divorce mentioned before.

The sight of a young and confused child desperately trying to locate his mother, all whilst getting no straight answers is a poignant piece of imagery, and such a memory takes its toll on Yamashita too, as he suddenly relives the vivid recollections of a fire which burned through the city during his youth.

Yamashita eventually does find himself attending the wake, and is unexpectedly met with numerous familiar and friendly faces. Closing the first chapter is his fated reunion with a father he hadn’t seen for so long, only now there are no words that could be shared, only a seeping feeling of regret.

Throughout the rest of the story, we see Yamashita try and piece back together the memories held of his father – an example of this comes from a vague recollection of his mother dancing with a man whose face and identity escapes him.

Upon learning more from his family members about Take’s earlier years as a hairdresser and his military ties and how this led to an invitation to a dance party, he realises that the missing visage is indeed that of his father’s.

It’s a simple yet effective portrayal of how strained their relationship was, to the point wherein Yamashita struggles to imagine a time where his mother and father were happy together.

We also get detailed insights into some tragedies which ravaged the Yamashita family, like an entire chapter dedicated to a major fire, referred to as The Great Fire, which effectively burned the entirety of their city of Tottori down to the ground, and the subsequent efforts by Take to put his family back together.

Take is portrayed initially as a proud man, turning down charity from his wife’s family to rebuild his barbershop and give his children a proper new home, yet we are also shown the reasons for his pride. As Yamashita’s uncle Daisuke puts it “Take-San had a strong sense of obligation. He was a principled person”.

The story continues to weave between past and present like this, also putting focus on Yamashita’s mother Kiyoko, and her struggles with coping with the aftermath of the fire and the increasingly strained relationship with her husband, who felt the need to work harder and harder to pay back said loan, despite it eating into his family time.

Her eventual confiding in another man and panics about Take meeting an old female friend lead to a separation, which takes its toll on Yamashita, who comes to blame his father for the situation, especially due to the secrecy surrounding when and if she’d return.

Writer Taniguchi does a superb job at conveying the family melodrama here with subtlety and frankness, though perhaps readers who themselves have experienced a divorce in their family might interpret the portrayals here differently.

Yamashita’s youth and subsequent growth into a young man is shown to have some interesting parallels as the frustrated teen is stubbornly headstrong about leaving the city and not going to high school, pushing himself to the limits in the process, not unlike his father in that respect.

It’s here that I also appreciated the role of Yamashita’s step-mother Tsuruko, whose relationship with Take is decidedly healthier and has a positive effect on the household. Though Yamashita is often shown to be distant from her as a teen, her efforts to build a relationship and convince him that attending high school would be a wise choice, and it leads to Yamashita discovering a love for photography.

I also found Yamashita’s sister Haruko an interesting character, as we follow her life in these flashbacks as well. Being a few years older, she is more open to the prospect of her father remarrying, at first mainly so he doesn’t succumb to the overwork and pressure.

Her life is shown to have had its own tragedies which led to returning to Tottori to raise her son and inherit the family business. At the time, Yamashita sees this as a get-out clause for having to return but at the wake, he expresses remorse, believing her to have been essentially sacrificed for their family to function, though her maturity shines through in the response she gives.

The final chapters of A Journal of My Father bring the story full circle, as we follow Yamashita leaving to work in Tokyo and rarely revisiting his family or hometown, he even gets married without his family present. It is through Uncle Daisuke and his reminiscing that Yamashita really gets a perspective on how his father felt, as if his son was well out of reach, much like Yamashita felt about his mother in their absence.

Daisuke becomes increasingly frustrated with his nephew as the story unfolds and more sake is ingested, coming across as a man who was a true friend to Take, long beyond his sister’s departure from their lives.

As Yamashita realises his failure at understanding his father’s sadness and anguish, it finally brings a more visceral and emotional response and yet it’s handled with effective subtlety. The final chapter closes off the story wonderfully, with an unexpected reunion and some invaluable introspective lessons learned.

A Journal of My Father is available in hardback format, and is wonderful to have in-hand. It also includes six or so colour pages and the aforementioned afterword from Taniguchi himself, contextualising what personal experiences led to the creation of the manga. The translation work here by Kumar Sivasubramanian and Chitoku Teshima also works well, conveying the dialogue and inner-monologues effectively.

Jirō Taniguchi’s A Journal of My Father is an effectively told story, concise in structure and built on the very flaws that make us human – we resent and we regret, we’re stubborn and we run away to cope. It’s knowing that Taniguchi took inspiration from his own life that punctuates the storytelling, all whilst providing a self-contained manga which I can recommend to anyone looking for an engaging family-based drama. 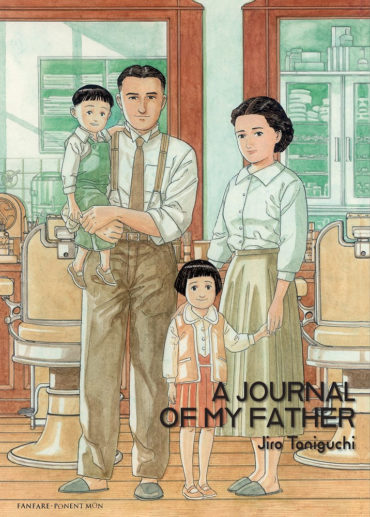 Title
A Journal of My Father

Sky Hawk is a western-themed manga that tells the story of two former samurai, Hikosaburô Soma and Manzô Shiotsu, who in May 1869 crossed to San Francisco on an immigrant ship to seek a new world. The two samurai thought they had left behind the way of Bushido but find themselves embroiled in the awful conflicts between the Native American tribes and the American government.

This manga is a drop of calm in an otherwise over-excited and high-action artform.