Recently we’ve begun to see an increase in the number of romcom light novels making it into English. The latest to hit the market is Yen Press’ The Angel Next Door Spoils Me Rotten, which promises a slow-burn romance. Does it prove heartwarming? Let’s find out!

The story follows first-year high-school student Amane Fujimiya who one day finds the most popular girl at school, Mahiru Shiina, sitting alone in the middle of a rainstorm. Not wanting the idol to catch a cold, Amane gives her his umbrella before running back home. While he might have avoided Mahiru catching a cold, unfortunately, Amane comes down with one himself.

Although Amane attends school the next day, by the time he returns home that evening, the worst of his symptoms are catching up with him. As he enters his apartment, Amane is on the point of collapse when he’s suddenly caught by Mahiru! Unbeknownst to him, this beautiful girl lives in the apartment next door and saw him struggling on his way home. Indebted to him for lending her his umbrella, Mahiru vows to nurse him back to health.

From there on, Mahiru and Amane end up becoming friends. Having seen the state of Amane’s apartment and learning that all he survives on is convenience store food, Mahiru just can’t leave the boy alone. She begins by bringing him over some of the food she cooks for dinner every day, but eventually that leads to her cooking for them both at his place every day.

Since there is such a big difference in Mahiru and Amane’s social groups at school, the two keep their friendship a secret. Not least because Amane is the only boy Mahiru will give the time of day, given how many approach her just because of her good looks. Initially, she even worries Amane wants to date her, but quickly comes to the realisation that he’s completely uninterested.

Of course, it’s obvious to us readers that Amane is growing attached to Mahiru and developing romantic feelings for her, but due to Mahiru’s feelings towards guys finding her attractive, it’s going to be difficult for him to own up to them. Of course, unbeknownst to him, Mahiru is also beginning to fall in love…

The Angel Next Door Spoils Me Rotten is a fairly slow read, especially if you’re hoping for any romantic developments. We spend a lot of time getting to know both of the characters and by the end of the book, I was suitably attached to them both. Although the story is fairly systematic in that in almost every chapter Mahiru cooks for Amane and then they discuss the food, I quite liked seeing a slice of their everyday life. It was sweet even if a little repetitive.

Even if you find yourself uninterested in the ‘will they won’t they’ element of the romance, I think the cast have quite a lot going for them. For Amane this story is all about bettering his lifestyle, eating and living healthily while becoming friends with Mahiru. However, for our heroine, there are some painful memories buried, due to her beauty and rich upbringing. So far we’ve only had hints here and there regarding her past, but as she grows closer to Amane she’s beginning to open up and I’m looking forward to seeing that going forward.

Another positive aspect of the book is that Mahiru isn’t at all the delicate type of girl the artwork gives off. She’s certainly capable of looking after herself and has quite a feisty personality underneath her quiet façade. I appreciate this since it would have been so easy for author Saekisan to make her into some kind of damsel in distress, especially after the scene where Amane gives her his umbrella.

This is Saekisan’s first series to make it into English, but they have a few others to their name in Japanese. Like a lot of light novels, The Angel Next Door Spoils Me Rotten is based on a web novel, which means this book has quite a few short chapters. I think this works in its favour since it means we don’t linger on any particular storyline for too long.

Illustrations have been handled by Hanekoto and while they largely focus on depicting Mahiru (I don’t think we see Amane at all beyond one colour image…), the illustrator does well to capture the many sides of her personality. One thing I will say is that Hanekoto’s style seems more suited to colour than  the black and white images, which look a little washed out in places.

The Angel Next Door Spoils Me Rotten comes to the West thanks to Yen Press and has been translated by Nicole Wilder. The translation reads well with no issues to note. The series is on-going in Japan at 3 volumes, but Yen has yet to schedule Volume 2. Hopefully, it won’t take too long!

Overall, The Angel Next Door Spoils Me Rotten is a slow but fulfilling romantic comedy. While successfully side-stepping some of the usual tropes of the genre, it’s easy for readers to get invested in the characters and their story. 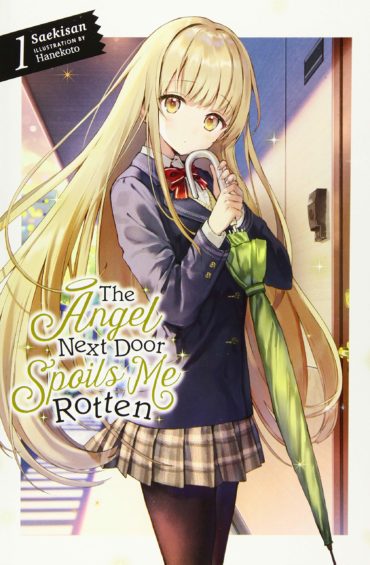 Title
The Angel Next Door Spoils Me Rotten Volume 1

The Angel Next Door Spoils Me Rotten Volume 2 Review

In Volume 2 of The Angel Next Door Spoils Me Rotten, Amane and Mahiru spend a peaceful New Year together before Amane’s parents arrive to cause all kinds of trouble!