One of the more popular anime to air last year was undoubtedly Silver Link’s adaptation of My Next Life as a Villainess: All Routes Lead to Doom! The series saw its protagonist reincarnated into an otome game, a plot which is becoming a very popular subgenre of isekai in Japan. Today I’m here to take a look at Volume 1 of The Dark History of the Reincarnated Villainess, a new release from Yen Press from this popular section of the manga world.

The story follows protagonist Konoha Satou who, as a middle-school student, wrote a whole otome novel about the world she wished to be reincarnated into, should she die. Now she’s a working adult and no longer thinks about such things – that is, until she’s suddenly hit by a truck and dies!

Konoha awakens to find herself in the world she created – but there’s just one problem. Instead of being reincarnated into the heroine, she finds herself as the heroine’s little sister, Iana! To make matters worse, Iana is the villainess of this story who dreams of nothing but to kill her older sister. Now, of course, Konoha (or Iana as we’ll refer to her from here) wants to live a quiet life in the world she created and does her best not to trip any of those pesky death flags that will lead her to a bad end.

The big problem for Iana is that she’s reincarnated into her story at the point in time when everyone around her already suspects her of wanting to kill her sister Konoha (yes, she named the protagonist after herself!). To make matters even worse, the man who kills Iana in Konoha’s story, Sol Nemophyra, is appointed as one of her servants. Now Iana really can’t put a foot wrong or she’ll almost certainly end up dead.

I must confess that while I love the premise of this story, I find it muddled. Author Akiharu Touka (who has another title in Japanese, but this is their first in English) is trying to cram a lot of things into the book and that works against it more often than not. Not only is this a reincarnation story, but it’s also a shojo series which is where most of its problems come from.

The tone of the sparkly romance moments (of which there are a few between Iana and Sol) is completely at odds with the dark undercurrent of Iana potentially being killed. This is not helped by the fact that of the three chapters in this book, Konoha or Iana find themselves in mortal danger in each one. In which case the shojo moments distract from the otherwise darker narrative.

Having said that, I think there is room for growth here. If Touka can get over every chapter harbouring some life or death situation, then the romance is going to fit better. Although I confess rather than the story, what kept me engaged was Iana as a character. The manga frequently flips between Iana’s energetic moments as a middle schooler creating this story and the realities of her current situation. She certainly has a lot of regrets about how she wrote some of these characters, that’s for sure!

While Sol, Konoha and her fiancé Ginoford Dandelion are more generic in terms of personalities, they’re not bad characters either. Sol in particular is interesting to watch develop since he’s caught between believing Iana is evil and also acknowledging that perhaps she isn’t the bad woman everyone believes her to be. As he begins to develop feelings for Iana, I think that’s going to lead to some interesting moral debates for him in the future.

As far as the artwork is concerned, Touka has a very distinctly shojo style. The characters are very attractive and the girls are more often than not blushing while around them. Panels are often quite empty save for a focus on a character’s expression, but that works fine, considering the genre. There are some very nice two-page spreads in the book which more than make up for the lack of detail elsewhere, too. The biggest issue with the art is that it simply doesn’t give off the dark feeling that the story often demands, which is a shame.

As previously mentioned The Dark History of the Reincarnated Villainess Volume 1 comes to the West thanks to Yen Press and has been translated by Lisa Coffman. The translation reads well, but I found the lettering (handled by Kimberly Pham) was a little difficult to make out earlier in the book. This is because when Iana is explaining the story to the reader, the font used is very fairytale-like, which is a nice touch, but I found it hard to figure out what some of the letters were – especially when it came to names. Thankfully, this gets better as the book goes on.

Also included in Volume 1 is a one-shot entitled The High School Necromancer Black Cloak, which is another fantasy-focused story. In many ways, I preferred this to the main story and would love to see the author continue it someday. The Dark History of the Reincarnated Villainess is on-going in Japan at 5 volumes and Yen Press currently have Volume 2 scheduled for release in April.

Overall, Volume 1 of The Dark History of the Reincarnated Villainess is somewhat disappointing. If you’re particularly invested in the ‘character reincarnated as a villainess’ genre, then you’ll certainly enjoy what this manga offers but many readers will be put off by the awkward contrast of the story and shojo elements. Hopefully, it will grow out of these issues going forward, since there is a good base to work from! 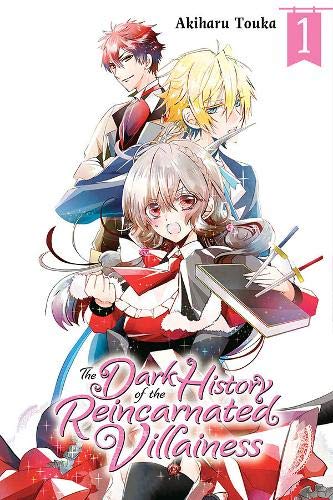 Title
The Dark History of the Reincarnated Villainess Volume 1

The Dark History of the Reincarnated Villainess Volume 3 Review

In Volume 3 of The Dark History of the Reincarnated Villainess, young ladies are going missing and Iana is suspected of being behind it!

The Dark History of the Reincarnated Villainess Volume 4 Review

Having solved a kidnapping case that was supposed to be the final arc of Iana’s story, our protagonist is feeling hopeful about the future. That is, until an assassination attempt is made on Konoha and they meet an elf whose village holds a deadly secret…

The Dark History of the Reincarnated Villainess Volume 5 Review

Volume 5 of The Dark History of the Reincarnated Villainess takes a step back from all the madness as of late and gives our cast a chance to rest and regain their strength, but as usual Iana’s troubles are only just beginning when another new character is introduced…

The Dark History of the Reincarnated Villainess Volume 6 Review

Volume 6 of The Dark History of the Reincarnated Villainess sees our cast head to the Land of Ninja, where Iana must once again avoid a bad end for her and her sister Konoha!