In the near future, humanity is beset by a mysterious disease known as Cagaster. Affecting one in every thousand people, the disease mutates them into giant human-eating insects, which go on to breed and make more insects, which in turn puts humanity on the verge of extinction, with the eastern part of the world in particular heavily decimated.

Eventually, the world’s governments authorise the extermination of these monster bugs, giving rise to the profession of insect exterminator. The series’ protagonist, Kidow, is one such exterminator, who now resides in the city of E-05 (judging by the environment and architecture, located somewhere in the middle east) after escaping from the far east. While out on an expedition with his shady merchant friend (who appears to make a living from scavenging the ruins left behind after insect attacks), the two come across a lone car carrying a heavily injured man and his teenage daughter. In his last moments, the man pleads with Kidow to take his daughter and get her to her mother in his place. Knowing he can’t exactly leave someone right next to a giant insect nest (called a cage), Kidow reluctantly agrees. However, he will soon realize he has no time to help the young girl as, back in town, he finds himself wrapped up in a series of mysterious murders, where the victims are all exterminators, and it appears Kidow is next on the list. Will he be able to survive to fulfil his new mission?

Despite the blurb on the back of this volume comparing the series with Mad Max and Attack on Titan, I actually found Cagaster (or Cagaster of an Insect Cage as it’s more widely known as) to have more in common with Fire Force, as it has a lot of the same elements, like a mysterious disease affecting humanity and turning them into monsters, and something shady happening in the background where someone is attempting to use the situation for their own evil ends.

While these are pretty common themes in humanity versus monster stories, using insects gives it some potential to have a greater horror angle than some other series, as insects can be pretty horrifying creatures. It depends on the story’s ultimate direction though, as so far it hasn’t really looked at the insects at all. While there’s some exposition at the beginning of each chapter, this first volume instead just wants to introduce us to the characters and their main motivations.

Kidow initially doesn’t come off as a very likable character. He’s a bit of a jerk and doesn’t want to take any kind of responsibility, especially when it comes to his new charge, which he is at least criticised for by the owner of the inn where Kidow is staying. When pushed to it, though, he reveals himself to be a good and kind-hearted guy who is just trying to look out for people in his own way.

We don’t spend too much time with him however, as the development of the girl, Ilie, takes up the majority of this volume. It shows her adjusting to her new environment (helping to build up an image of the city and its people), while giving us a pretty extensive backstory around who she is and where she has come from. While this works well to bring in the side characters (particularly the vagrant kids in the Field Mouse Brigade), I can’t help but feel it’s laying out too much up front, and by the end of this volume most of the mystery surrounding her circumstances is gone. We still don’t know where her mother is, of course, but with her so settled in, it’s difficult to imagine how her character can really grow from here. This is actually in pretty stark contrast to Kidow, who becomes more of a mystery as we get hints of his past, so there’s at least an interesting role reversal here.

The supporting cast is rather mixed, and while there are some characters that are particularly fun, like the children of the aforementioned Field Mouse Brigade, who are looking to be the biggest and baddest group of thieves in town, the majority are either bland or play off well-used tropes. The owner of the inn cross-dresses, for example, which is something that I’ve seen in quite a few different anime and manga series now, and one of the merchants that Kidow accepts a job from is frankly a racist caricature, looking like the typical portrayal of an Asian man that you see in shows from the 70s and 80s, with an evil demeanour, narrow eyes and pointed moustache.

Hashimoto’s artwork is very rough and sketchy, particularly at the beginning of the volume, which gives it a rushed and unfinished appearance. Cagaster was the author’s first work and initially started life as a dojinshi, and that definitely shows in these early pages. I wouldn’t call it outright bad, but it is very bland and incredibly inconsistent. For example, one scene shows Kidow kicking his merchant friend in the face, hurting him, only for him to be fine in the next second, and then a few pages later having a bloodied face again. Things do however improve as it goes along, and I feel like it’s starting to come together as the volume reaches its end.

Speaking of firsts, it’s a first for Ablaze Publishing as well, with Cagaster being the US comic book publisher’s first manga release. As such there are a few issues that I hope get ironed out in later releases and reprints, with there being the occasional error in the printed text, while the translation itself feels very blunt, like it’s being translated word-for-word from Japanese rather than being more typically localised. This leaves some sentences not exactly making sense, which is a shame, as it’s a pretty nice book to physically pick up and hold.

Overall, then, it’s a bit of a rough start for Cagaster. While its initial ideas are interesting, it feels mis-sold as a humanity versus monsters story when it barely uses that part of the plot, instead burning through a lot of the mysteries surrounding one of its main characters in a single volume. Couple this with its bland and controversial side characters, rough artwork and a very blunt translation and this becomes a difficult manga to get into, even though it does have the potential to improve in later volumes. 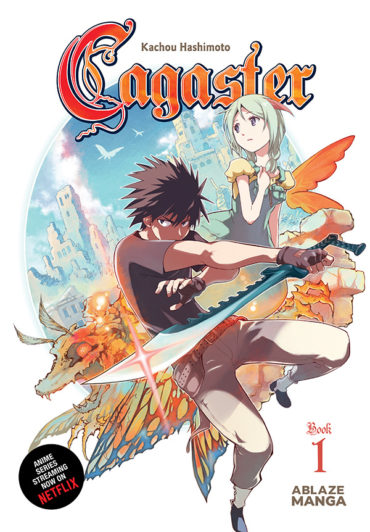 “Listen, I know a real champion of justice. He never ran away… He fought against evil all by himself. He was my best friend…” It is the summer of 1969, and young Kenji Endo and his friends have built themselves a secret hideout in which to read comics and escape from their tormentors, the Terrible … Continued

Land of the Lustrous Review

Land of the Lustrous is one of the few anime to use CGI and achieve truly dazzling effects.

“I am not a number! I am a free man!” – Patrick McGoohan as Number Six in The Prisoner. The choice of the above quote is rather fitting for this review, and not just because the connection between the title of the manga and the name of title character from a 1960s cult TV show. … Continued