“I don’t think I have to be careful around those guys. I mean, that’s the last thing they would want from me. When I want to go somewhere, I go, and when I want to run away, I run away. I say what I want and I see who I want – and I tell them what I’ve seen. I can be myself with them.” – Mayumi Dojima

Throughout the last couple of month’s NISIOISIN fans have been delighted by SHAFT’s anime adaptation of Pretty Boy Detective Club. If you can’t get enough of the series, then you’ll be happy to hear Vertical have just released the third volume of the light novels, which I’m here to take a look at today!

Now that protagonist Mayumi Dojima has solved the case of a missing star and broken up an illegal casino with the Pretty Boy Detective Club, it’s fair to say she has become a full-fledged member of the group. However, instead of solving mysteries today, she’s tasked with aiding the group in redesigning the club room.

Of course, nothing is as simple as it first seems and it’s not long before the group stumble across a new case. While redecorating, they find a secret passage in the ceiling, which contains replica paintings of many famous works. The strange thing is, these canvases may be perfect copies of the painting they’re based on but there is not a single person in these scenes.

Faced with this discovery, the group quickly postpone their redecorating to work out both who painted these mysterious canvases and why they went to the effort of removing all the people from them. More importantly, could this case hold the answer to a mystery from seven years ago? It’s up to this group of detectives to put their heads together and come up with a satisfying answer!

If you think this story sounds more down-to-earth than the previous entries in the series, then you’d be correct. In many ways, this mystery doesn’t matter, since the real meat of the story is elsewhere this time around.

What’s most important here is Mayumi and the fact she’s struggling with her feelings. She’s not sure she belongs in the Pretty Boy Detective Club, nor does she fully believe that the other members accept her for who she is. She’s neither a boy nor a detective and she doesn’t feel as if she has as much to offer the otherwise genius group.

NISIOISIN’s books are always filled to the brim with eccentric characters, faithful protagonists that the readers can believe in and cheer on and their lovable companions. Mayumi, however, is different. She’s full of doubt and insecurities, both surrounding herself and her newfound friendships. Maybe simply the fact we haven’t seen this from the author before is what makes her even more endearing and why I was so eager to see her put her fears to rest over the course of the story.

For many readers, the themes of acceptance and belonging will almost certainly resonate quite strongly and I was happy to have plenty of time spent on this aspect alongside the painting case. It’s also rewarding to finally have some notable character development since the previous two books have been notably light on spending time with the cast in favour of jumping into the mysteries.

Having said that, if you were hoping for more development in terms of any of the boys, that certainly isn’t here beyond small glimpses. Admittedly since watching the anime I’ve found it a lot easier to both remember all the characters and care about them since the adaptation had the time to get us acquainted with them more slowly. If you’ve also been struggling with this then I do highly recommend checking out the anime (available on Funimation), since it will certainly raise your enjoyment levels of the books a great deal.

As previously mentioned, Pretty Boy Detective Club Volume 3 comes to the West thanks to Vertical and has been translated by Winifred Bird. The translation reads well without any issues to note. Right now no more volumes of the light novel are scheduled, so it might be a while until we can return to the adventures of this cast. Although the manga adaptation will start being released in July, so there is always that to fill the gap.

Overall, Pretty Boy Detective Club Volume 3 pushes character development to the forefront in what becomes a satisfying story for Mayumi. If you’ve been enjoying the series so far, you certainly won’t be disappointed with this entry! 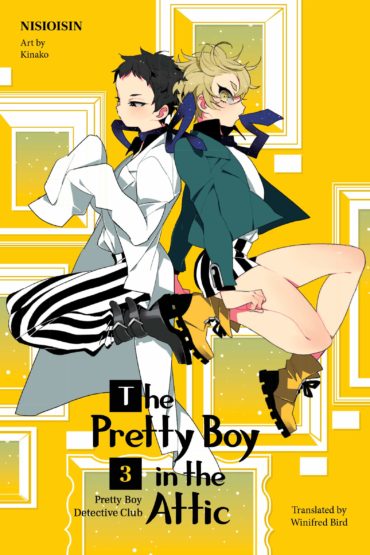 The Dawn of the Witch Volume 1 Review

The Dawn of the Witch follows protagonist Saybil, who’s on the verge of being expelled from The Royal Academy of Magic. In a bid to solve his problem, the headmaster sends him and some other handpicked students off to a remote village where they can prove themselves in a less traditional way.