Senpai’s been getting a little too touchy-feely recently… Miyano, thinking about Sasaki

Miyano (first year) is hooked on Boys’ Love manga. His upper classman Sasaki (outward-going, dyed red hair, reputed to be a ‘bad boy’) is fascinated by Miyano and his puzzling obsession. Miyano convinces Sasaki to try reading some BL too. He’s keen to discuss the stories he’s reading with another reader – and as this is a single-sex school, that means other boys and they really don’t want to know. Miyano’s friend/classmate Kuresawa has a girlfriend, so he maintains he knows about BL because she’s a fangirl. But Sasaki is different. For whatever reason (and he keeps telling Miyano that he thinks he’s cute) he wants to find common ground between them. So he starts reading BL too. Cue scene after scene in which Sasaki says something deliberately provocative (e.g. “Let’s play the Pocky game!”) and Miyano calls his bluff, in the Pocky case, taking it just so far – and then no further. “I’d really rather not eat right down to your fingers.” Sasaki, always smiling, is the master of the strategic retreat – but then we see him in close-up, having retired to the boys’ bathroom, his feelings in considerable disarray. I’m going to have to…be more careful about touching him… But the main schtick here is that Miyano is in a constant state of denial. This young fudanshi is keen to discuss the relationship between the top and bottom in the BL he’s reading but totally fails to acknowledge the dynamics of the vibe between him and the older boy.

In one early encounter at school, Miyano comes upon Sasaki who’s been fighting in lunch break and is lying low to recover from the beating he’s taken. Miyano, concerned, goes off to get him a sticking plaster for the gash on his cheek. Sasaki, amused and touched by the younger boy’s attitude, can’t resist telling him, “You’re really cute, Mya-chan. Do you wanna go out with me?” to which the inevitable answer is, “Huh? No.” 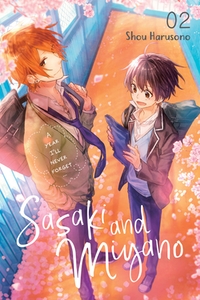 However, by the second volume, the sense of time passing – and the fact that the end of the school year is approaching, adds extra poignancy to the boys’ lives. The third years are leaving and Sasaki (and his friend Hirano) are about to enter their final year at school. Things are getting serious in terms of examinations and career choices. And both Miyano and Sasaki are beginning to experience those tell-tale signs around each other (pounding heart, painful chest, uncontrollable blushing). Miyano is still in denial, even though he now seems to be known around the school as the Bl Fanboy – and, interestingly, this doesn’t lead to bullying, although a senpai, Ogasawara, seeks him out to ask for advice. He’s not in a same-sex relationship, it turns out, but his girlfriend has been teasing him, saying she sees him as a bottom… so what’s a guy to do? Miyano is more concerned, though, about his own friendship with Sasaki. What did Sasaki whisper in his ear when he fell asleep on the train home? Maybe he really does like me that way…?

Sasaki and Miyano is a refreshing change from many contemporary BL. It’s developing into a slow-burn romance, in which the slightest of gestures or the briefest of exchanges are freighted with meaning. Miyano speaks with authority about the relationships in the manga he’s reading but hasn’t a clue how to handle Sasaki’s feelings in real life; he can’t even be sure if they are feelings or is he just teasing? His awkwardness is well portrayed – as is Sasaki’s confusion. Sasaki may be Miyano’s senpai, but he’s really only one year older and not as mature emotionally as his height suggests.

‘The story started out self-published on Pixiv as A Little Something About Sasaki and Miyano,’ Shou Harusono tells us in her afterword. And, as with I Cannot Reach You by Mika, another BL with high school protagonists, both series have found a wide readership, with Sasaki and Miyano being translated into an upcoming anime series. Ongoing at seven volumes, there is also a single volume spin-off, Hirano and Kaguya, so perhaps Yen Press can be persuaded to bring us that as well!

So now we’ve got that out of the way, the first volume betrays its Pixiv origins in that it’s mostly composed of 4-koma pages (just like Monthly Girls’ Nozaki-Kun) with some longer sections that don’t have to have a punchline. It’s a difficult act to pull off as, having begun the story with these brief snapshots, it requires a lot of skill to fill in the gaps and develop the material into an ongoing narrative. It’s not always successful but by the second volume, it’s flowing a lot better and the fourth wall isn’t broken quite so often!

Harusono’s art is attractive and accomplished – and do I detect the influence of Rihito Takarai in the character design (and haircuts) of Miyano’s senpais Sasaki and Hirano? (This is not a criticism – perhaps it’s an unconscious homage to that mangaka’s influential Seven Days). Each volume has colour pages at the front, four in Volume 1 and two in Volume 2 in which the mangaka’s luminous use of colours (blues, ochres and russets) is showcased by publisher Yen Press to excellent effect. These are slim volumes but there are excellent translator’s notes at the end from Leighann Harvey who, as ever, delivers a realistic and wonderfully readable translation. The mangaka gives us helpful character bios at the end of Volume 2 as well which is always a boon!

Sasaki and Miyano is very much an episodic, slice-of-life school story – but after a slightly predictable start in which ‘BL fanboy is in constant denial about being in a BL relationship’ (this joke can get old very quickly) it settles down into a better rhythm and starts to develop its characters in a very engaging way. But don’t believe the ‘BL means Boys’ Life’ label that was attached to it in some quarters – this is very much about relationships as well as day-to-day life. 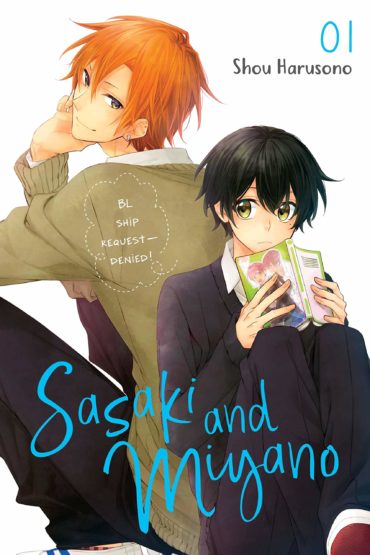