It’s really hard…to show someone how you feel… Sasaki, thinking about Miyano

For some while now, high-schoolers Miyano (first year) and Sasaki (third year) have been hanging out together. Miyano has been enthusiastically sharing his obsession with Boys’ Love manga with Sasaki, thrilled to find someone who will listen and – after some recommendations – actually read the same books that he’s enjoyed so they can discuss them. But Sasaki’s time at high school is coming to an end. He has important examinations. The whole school has examinations. The relentless schedule of the school year goes on, propelling the students forward. At the sports festival, Sasaki and Miyano find themselves alone for a moment’s respite from the races – and it’s then that Sasaki impulsively tells Miyano, “I like you.” Confused, Miyano asks him, “What do you like about me?” and Sasaki blurts out, “Your face.” Immediately the words are out of his mouth, he knows that wasn’t what he meant to say but other people arrive and it’s too late to take it back or explain. Now an awkwardness hangs in the air between the two. Can Sasaki do anything to undo what he’s said – to explain himself better?

Three (slim) volumes into Sasaki and Miyano and mangaka Shou Harusono is still keeping her cards close to her chest about the central relationship. She shows us Miyano’s confusion and conflicted feelings (which are very believable, especially given his age). When Sasaki confesses – and Miyano finds himself experiencing the real-life expression of something he’s read about many times in his favourite BL manga – he’s forced to re-evaluate everything he knows about himself. Does Miyano realize that he may be playing with fire? Harusono shows us Sasaki equally conflicted but more determined to let Miyano know how he feels with the pressure of time running out as his time at school draws to an end. But we don’t see more of the boys outside of their interactions at school (until the last chapter, an extra set at New Year). We don’t see them at home, we don’t know how they relate to their families. Above all, we don’t see Miyano really question himself about why he reads BL manga so obsessively. After all, much BL manga is sexually explicit and young Miyano is perfectly at ease (so it seems) to airily discuss tops and bottoms and the power dynamics in the relationships depicted in his favourite series. Is this just charming naïveté?

After Sasaki’s confession (interrupted, of course) what troubles Miyano most – and begins to drive him to examining his own feelings – is Sasaki telling him that his face is what he likes best about him. We know – although Miyano doesn’t – that Sasaki is kicking himself inwardly for having said such a crass and obvious thing and that, had they not been interrupted, he would have gone on to explain what he really wanted to say. But Miyano is not especially thrilled at having been gifted with a ‘girly’ face. In fact, he’s come to hate it. This struggle to articulate what he feels leads eventually to one of the more honest conversations between the two. There’s an intensity that – although hinted at before – is now palpable. Miyano (still in denial and reminding himself that he likes girls) has no idea how to respond.

It might appear that – apart from Sasaki’s confession – the relationship between the two hasn’t progressed at all in this volume. But Harusono is very good at depicting the emotions felt by her characters; they might be struggling to say how they feel but their faces say far more than the words that issue from their mouths. Sasaki’s expressions when listening to Miyano give away a great deal and even though the older boy is more skilled at covering up with a smile how he’s feeling inside, we get to glimpse that maybe he’s not as suave and experienced as he tries to appear. Another plus is Harusono’s realistic depiction of the other boys: Tashiro and Kuresawa (the one with the girlfriend), Miyano’s friends, and Hirano, Sasaki’s friend (there’s a spin-off in Japan about Hirano and his younger roommate Kagiura and they again get their own chapter here which is undeniably cute).

Leighann Harvey’s translation continues to deliver the boys’ banter and their more introspective, serious thoughts in a very readable way. Yen Press’s edition also contains two colour pages at the start, with more of Shou Harusono’s coloured artwork (her attractive cover art continues to catch the eye). There’s two really helpful pages of translation notes at the end before the Special Drama CD story My Wish and the mangaka’s Afterword (intriguingly mentioning a change of main editor from Chapter 16 onward, a significant issue for any writer!) Volume 4 is currently due out in October in the UK and the TV anime is still promised for 2022.

Now that we’ve reached the third volume of Sasaki and Miyano the series is revealing itself as a slow-burn, with no promises as to whether this senpai/kohai friendship will develop any further – or not. But slow-burn, when handled with skill by the author, is much more rewarding for readers as it allows time to get to know the central characters really well. 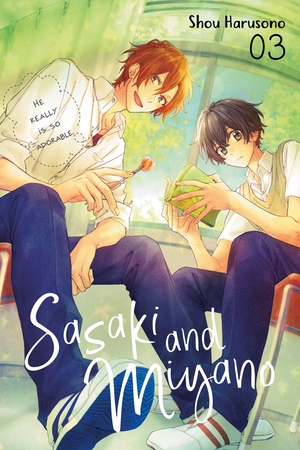