Last year it was announced that My Isekai LIfe: I Gained a Second Character Class and Became the Strongest Sage in the World! was getting an anime adaptation. The series has since been scheduled to begin airing in 2022, but ahead of that, Square Enix Manga have begun publishing the manga adaptation in English. Does it prove an entertaining read? Let’s find out!

The story follows protagonist Yuji Sano, a young man who spends all his time working, even when at home. One day a message pops up on Yuji’s PC, telling him that he is being summoned to another world, which, of course, he thinks is simply a bug… until he awakens to find himself in an unfamiliar location and face to face with a cute slime.

To begin with, Yuji is convinced he’s just having a very elaborate dream. After all, he’s not been getting nearly enough sleep recently due to work. Knowing he had an alarm set, Yuji decides to enjoy himself for now until he gets woken up and sets about exploring with the slimes he’s tamed. Before long he comes across an abandoned house and thanks to the 80(!) slimes he’s made friends with, he quickly absorbs all the knowledge contained in the books he finds there. This means he gains a second character class alongside Monster Tamer, so he is now both a Monster Tamer and a Sage with plenty of magic at his disposal.

With nothing better to do, Yuji heads to a nearby town where he decides to register as an adventurer so he can make some money to buy dinner (although his slimes insist the grass in the forest is plenty tasty!). At the adventurer’s guild, he’s met with disbelief when he reveals he has two character classes since that’s never happened before. Despite the fact the head of the guild is convinced Yuji is lying, they agree to put him through the test to accept him, thinking that his lies will soon come to light either way.

My Isekai Life certainly hits the same story beats as many of its fellow isekai adventures, which is perhaps no surprise when the original light novel author is Shinkoshoto who readers will recognise as being the author of The Strongest Sage with the Weakest Crest and who has several fantasy/isekai series under their name.

Strongest Sage is a series with a battle junkie protagonist leading it, whereas Yuji is simply getting himself set up in the new world he’s found himself in so he can live happily (while still believing he’ll wake up in the real world eventually), but there are plenty of similarities in the structure of the story. For example, both protagonists are considerably overpowered and have abilities that are thought not to exist in their worlds, which constantly amazes those around them. The main difference when it comes to Yuji is his Monster Tamer job and the many slimes he tames. The slimes all have different personalities, appearances and they can communicate with Yuji allowing them to be very capable partners for his adventure.

While the story isn’t anything particularly unique, I still enjoyed my time with it on the whole. The bigger issue for me is that the artwork by Ponjea doesn’t do it any favours. The slimes look great in terms of their appearance and how their personalities are shown off, but when it comes to the human characters the designs all feel off compared to what you’d expect them to look like. Maybe it’s simply the fact the chins are too pointed and Yuji always has a clueless, bored look on his face. I will say as a plus point to the artwork that the action scenes throughout looked fine, but because of the character designs, I struggled to get absorbed in the book properly. Yuji’s face is just far too distracting!

As previously mentioned My Isekai Life comes to the West thanks to Square Enix Manga and has been translated by David Evelyn. The translation reads well with no issues to note. This release includes colour pages at the beginning and a short story from the original author at the back. The series is ongoing in Japan at 14 volumes and Square Enix have Volume 2 of the English release scheduled for June.

Overall, My Isekai Life is a fun read if you like this genre, but the artwork holds it back from being particularly memorable and I think that will even put off quite a few readers. On the other hand, if you’re looking for some cute slime characters in your isekai then you need to look no further.

A free preview of the book can be found on the publisher’s website here. 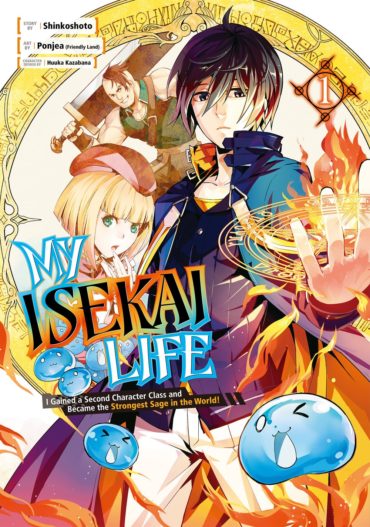 Title
My Isekai Life: I Gained a Second Character Class and Became the Strongest Sage in the World! Volume 1

My Isekai Life: I Gained a Second Character Class and Became the Strongest Sage in the World! Volume 2 Review

Volume 2 of My Isekai Life sees protagonist Yuji complete the Adventurers’ Guild exam and add a new monster companion to his party as he continues to adjust to living in this fantasy world.

Two more volumes of The Strongest Sage with the Weakest Crest bring more difficult challenges for Matthias and his team. With demons, corrupt lords and powerful monsters waiting in the wings, there’s never a dull moment for this party!