At the end of Volume 2, we were left on a nail-biting cliffhanger. Kakeru (out shopping in the local mall with his older sister) bumped into Akane-chan, the friendly girl he met at karaoke (out shopping with her friends) and started chatting, only to be spotted by Yamato (also out shopping with his sister). Yamato’s conflicted feelings got the better of him; he pulled Kakeru into a corner (unnoticed by anyone else) and then to his and Kakeru’s utter confusion, hugged him. Tight.

Yamato, it turns out, completely misread the situation. He’d assumed that Kakeru and Akane-chan were on a date. Since then, neither boy has been sure how to behave around the other. Which makes the planning meeting for the upcoming three-day school trip to Kyoto extremely awkward, not just for them, but the other three boys in their group. Yamato knows Kyoto very well from early childhood family trips, but he’s taken aback to be confronted by Hosaka, who seems to take a certain sly pleasure in messing with him to see if he can provoke a reaction. As for Kakeru, well, he’s as honest as ever when he says, “I don’t mind as long as I get to eat tons of good food.”

And then the school trip begins, with collages of photos taken by the group at the tourist sites. The first evening at the hotel, one of the girls, Kurosawa, quietly asks Kakeru to give Yamato a love charm she’s bought at one of the Kyoko temples. Kakeru is at a loss as to what to do and agrees – but he’s even more disconcerted when the sudden night-time appearance of a teacher checking on the students causes him to dive beneath the wrong futon. Just as the door opens, he realizes that he’s lying in a very compromising position on top of Yamato – and there’s no way either of them dares move or let out a sound until the teacher has gone.

Once that misunderstanding has been resolved (or not) plans are drawn up for the third and final day. Yamato suggests that Kakeru might like to go visit the Bamboo Forest at Arashiyama with him and Kakeru readily agrees. But Fujino, their group leader, has secretly plotted with his girlfriend (her school year group is also visiting Kyoto) to ambush the boys and set up a surprise date between Akane and Kakeru. Fujino (utterly caught up in the  matchmaking plan) even goes as far as to quietly suggest to Yamato that he leave the couple alone together. What can Yamato do but comply, saying, “I’m gonna hang out with everyone. It’s fine. It’s not like I wanted to go all that much.” It seems that he doesn’t care that his plans have been ruined… when it’s painfully obvious to everyone – except Fujino – that he does.

Setting the main characters loose in a new place, away from their daily routine, is always a good way to create interesting – or in this case stressful – situations. The high school journey is a well-worn classic in slice-of-life stories as it offers so many possibilities for relationships to bloom or crash and burn. So, what does mangaka Mika bring to this familiar set-up that’s fresh and different? A new face – to us, at any rate. Tadashi Hosaka is the classmate who isn’t intimidated by Yamato’s emotionless manner. In fact he seems positively keen to understand what makes him tick, coolly asking all manner of intrusive questions then backing down with a grin, saying, “I’ve aaalways wanted to get to know you better.”  We’re left wondering what’s behind his probing; could it be he’s interested in Yamato as a friend – or something else? Whatever his motives, he’s certainly skilled at rubbing Yamato up the wrong way (or, rather, being rather too perceptive in his observations). This leads to some revealing and unexpected conversations later on, first with Kakeru and then with Yamato…

Mika’s art is as accomplished as in the earlier volumes; her covers are beautifully executed, with sensitive use of colour. Like the first two volumes, this edition also boasts three striking colour pages at the front. She’s especially good at creating tension in everyday situations where the characters’ facial expressions are telling the reader how they’re really feeling, in spite what they’re saying. She’s also good at cute chibi versions of her main characters – and delivers some lovely little moments of humour in the 4-koma sketches that are placed at the end of all the chapters this time, except the fateful last one!

Lots of helpful translation notes this time at the back (mostly about places in Kyoto and food) from translator Jan Mitsuko Cash. The mangaka’s Afterword has the parting tease, ‘I’d like to draw something spicy soon…’ so maybe this hint means the fourth volume will have an ‘M’ rating; who knows?

BL readers who want to see the main pair get together and are impatient with a slow burn might lose interest in I Cannot Reach You. However, for readers who are invested in the characters (and they’re really well drawn, both graphically and in the way the story unfolds) this reaches a level of painful intensity that demands some kind of resolution or confession.  Then, darn it, this volume ends on yet another nail-biting cliffhanger – so I, for one, can’t wait to see what happens next in Volume 4 (due out in April from Yen Press)! 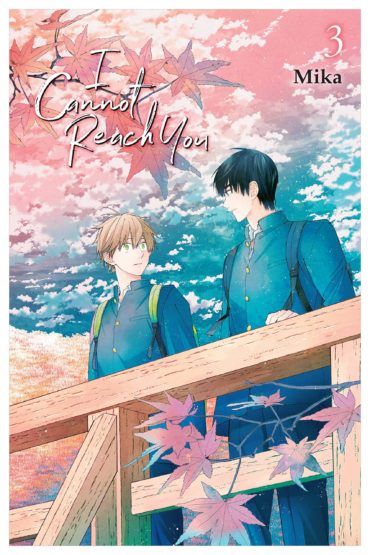 Title
I Cannot Reach You Volume 3