This new collection of Osamu Tezuka’s twisted tales of doomed romance – published by Vertical under Kodansha’s label – is a particularly dark collection which will appeal to anyone who has ever had their heart broken.

It starts weirdly, with 500 million anthropomorphised sperm racing to be the one to fertilise an anthropomorphised ovum, in what feels like a peculiar precursor to Cells at Work!, but after that we get to the story proper. The story follows Shogo Chikaishi, a boy who is sent to a mental hospital. We learn that, hated by his single mother who had an unplanned pregnancy, he has never learned who his father was and has no interest whatsoever in love. This hatred of love manifests itself in him killing any animals he sees expressing love, and this in turn has led him to be sent to the hospital, for fear he might go a stage further and start killing people.

He is examined by Dr. Enoki, who decides to subject Shogo to electro-shock therapy. As a result of this, Shogo has a vision of himself in a temple, where he meets the goddess Aphrodite. The Greek goddess of love curses Shogo for being unable to express love, saying that he will be doomed for all eternity to constantly reincarnate and fall in love with a woman while alive, but before they can unite, one of the couple will die.

Over the course of the story, Shogo experiences different visions and real-life encounters with various women that are all doomed by the curse. During his electro-shock treatment, Shogo envisions himself as a Nazi escorting Jews to a concentration camp and falling for a young Jewish girl whom he tries to free during an air raid. Under hypnosis, he dreams that he is a pilot carrying a woman photographer to a volcanic island, but they crash onto a desert island full of animals who love each other, meaning the only way to survive is to co-operate, only for everything to be ruined by more arrivals during a rescue attempt.

Shogo then flees the hospital after it is suspected that he murdered another patient who is a nymphomaniac, but his speed gets him noticed by a woman named Hiromi who trains him to be a marathon runner, only for him to be attacked by Hiromi’s jealous ex-fiancé. After this attack, Shogo dreams he is in the year 2030 and has been tasked to assassinate the new ruler of the world, the queen of a race of clone-like beings called “Synthians” who do not experience love themselves, but when the two meet, the queen falls for him. Once he awakens from this dream, Shogo attempts to meet up with Hiromi once again, but when he overhears a conversation about her true identity, Shogo is driven even further into despair.

Apollo’s Song is certainly not a jolly series. Back in the day, this was one of the Tezuka manga released by Vertical to show western audiences his range of more adult work. It is for this reason that Kodansha’s reprinting sticks with Vertical’s formatting in a flipped left-to-right reading pattern rather than the traditional Japanese right-to-left. The manga, however, is well-made, with praise going to Peter Mendelsund for his cover design, although it does feel weird that the three panels on the front cover he chose are a small one of Shogo at the hospital, a large one of the anthropomorphised ovum, and one of the massive crowd of racing sperm. Most of the front cover is devoted to characters who appear only at the very beginning of the book.

However, Tezuka’s art really does shine in this title. One of the best scenes is in the 2030 future storyline in which Shogo learns that humanity has been mostly wiped out by toxic gases caused chiefly by man-made pollution. The most powerful pictures in the book show vast areas of Tokyo turned into huge graveyards, while the broken-down buildings and skyscrapers dwarf the tombstones. These scenes reportedly were inspired by the times Tezuka was living in, with the grim Shogo reflecting the unstable era Japan was going through with student riots taking place.

Regarding production, there are elements of Camellia Nieh’s translation that feel irksome. The one that sticks out most is in the Nazi chapter where as Shogo spies the Jewish girl he falls for, a fellow soldier points out his erection, but the soldier refers to Shogo’s penis as his “weenie” which sounds way too childish for a manga of this kind, especially given the target audience. It feels too immature for the book in general and for a chapter involving Nazis in particular.

Another element that sticks out is how heteronormative Apollo’s Song is, especially reading this over 50 years since it debuted. All the relationships Shogo finds himself in are with women for starters. Also, in the opening prologue involving the sperm and ovum, there is an ending passage about the development of the embryo in which Tezuka writes: “Nature divides us into male and female”. When you start reading it, you do think this manga would now be the subject of some transgender revisionism, but later on we learn that the futuristic Synthians have no genitalia and reproduce via cloning, so elements of other kinds of gender other than male and female do appear in the story.

Apollo’s Song is certainly worth a read if you are a Tezuka fan, and if you are in the mood for something gloomier than the standard manga fare. 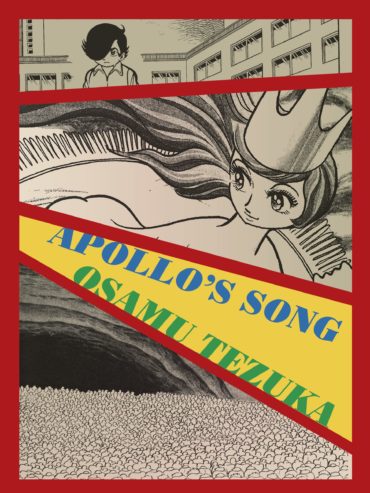