“Hang on… he said something about going out together. Wouldn’t that be… what’s commonly known as a date?” Adachi in a flat spin.

A first date. Now that 30-year-old salaryman Adachi has overcome his shyness and admitted his feelings for his confident, good-looking colleague Kurosawa, a date is the first thing on Kurosawa’s agenda. But unworldly Adachi has never been on a date before and is overcome by feelings of insecurity. Then there’s the problem of his secret ability: ever since he turned thirty, the virginal Adachi has developed the ability to read the thoughts of anyone he touches.

Adachi, riddled with anxieties, doesn’t know what to wear to the date and manages to turn up ten minutes late. And Kurosawa has really laid on the works for their first outing together, culminating in a surprise ride in a helicopter. This is the last straw for Adachi who – after only five minutes aloft, being buffeted around – blurts out that he wants to get off asap! And so the first date comes to a premature end with both men confused and disappointed; Adachi ashamed of his inability to get over his insecurities and Kurosawa mortified that his heartfelt attempts to provide a series of entertaining events have failed so dismally. Is this relationship over before it’s even begun?

Since I first reviewed Cherry Magic! when Square Enix brought out the first volume in 2020, this likable BL manga has gained a worldwide following, thanks to the live action TV series (available on Crunchyroll) and now a film. Disappointingly, the manga volumes in translation have appeared sporadically (Japan is up to the tenth volume this month!) and while it’s a great pleasure to welcome the fourth at long last, if you’ve watched the TV series, there won’t be anything new for you here as the English editions are playing catch-up and then some! Nevertheless, I firmly believe that the original manga series communicates the chemistry between the main characters in its own unique way, something that I feel the live-action actors don’t always put across. Mangaka Yuu Toyota’s graphic style is still – to be frank – a bit rough and ready, with faces occasionally slipping off-model. However, there’s an endearing and sincere quality to the way she depicts her characters that communicates what they’re feeling and how they interact with each other. This, almost certainly, contributes a great deal to the success of the story: there’s a real warmth that radiates from the panels, making the relationship very relatable and believable. If you’ve enjoyed the TV series, you’ll almost certainly find your experience enhanced by reading the manga that inspired it.

Fans of the other 30-year-old wizard, Adachi’s novelist friend Tsuge, will be pleased to find another two chapters here about the writer, his cat Udon and Udon’s greatest fan, the young fair-haired delivery man, Minato, who just happens to be an aspiring dancer. And, as in previous volumes, Square Enix add the first chapter of the next volume as a trailer for what’s coming next (although it also means that with each new volume, the reader gets that déjà vu feeling at the start).

This volume (like the others before it) comes with a ‘M Mature’ rating. This is a pity, because there’s nothing that could remotely be described as a scene of a sexual nature, no nudity, no suggestive or sweary language etc. It’s all remarkable chaste and sweet-natured – which might be the secret of its appeal. Holding hands is a really big deal here (and surreptitiously in public because, as in so many LGBT+ stories set in Japan, kissing, hugging and hand-holding is still often ascribed to Western customs picked up while working in the US or Europe). There’s one cringey moment on the first date when Adachi is trying on new clothes, aided by Kurosawa, and Adachi ‘hears’ the song Kurosawa is mentally singing about his feelings for him – but the cringe-factor is played for humour by the mangaka as we can’t help but feel as embarrassed as Adachi does. And it’s impossible not to sympathize with poor Adachi’s reaction when he finds himself in the helicopter; that has to be one of the most relatable scenes I’ve read in a long while!

The translation is again by Taylor Engel and brings out the differences between the main pair well. There are also helpful translation notes. The lettering by Bianca Pistillo is vital for conveying when Adachi (and Tsuge) are hearing the inner thoughts of other people, rather than their voices. Square Enix’s edition is, like the earlier volumes, printed on good quality paper and has a cute ‘cherrygram’ colour page at the front. Hopefully we won’t have too long to wait for Volume 5 as it’s currently scheduled for July 2022! 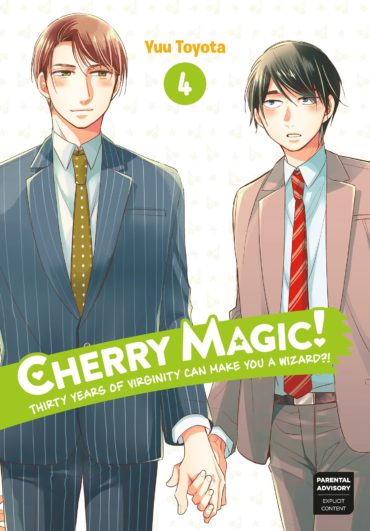 Title
Cherry Magic! Thirty Years of Virginity Can Make You a Wizard?! Volume 4

Cherry Magic! Thirty Years of Virginity Can Make You a Wizard?! Volume 5 Review

Adachi and Kurosawa have been on their first date together – but Adachi has still not told Kurosawa about his telepathic magical power. He wants to be honest with the man he loves but fears the consequences…

The Snake Who Loved a Sparrow Review

Members of the sparrow clan should be terrified of snakes – but when Komazu’s life is saved by a white snake, it’s the start of an unusual relationship in a world in which forest creatures can assume human form.