“I’m full of all these feelings.” Miyano, thinking about Sasaki. “It hurts.”

The high school’s cultural festival is drawing closer and Miyano has – somewhat reluctantly – agreed to represent his class in the Just One Day/A Girls’ School drag contest. He’s been trying on his costume and wig in an empty classroom, helped by Hanzawa, the chairman of the discipline committee – but when Hanzawa’s called away, who should walk in but Sasaki? The question that Sasaki can’t help asking, on seeing Miyano dressed as a girl, If I asked you not to, would you do it for me? faces Miyano with a difficult dilemma. He agreed to do this for his class. But he sees an expression in Sasaki’s eyes that he’s never seen before. And then – somehow – Sasaki’s backed Miyano up against the shelves, there’s nowhere else to go and Sasaki’s holding him. Kuresawa’s voice outside – asking why is the door locked? – finally breaks the tension. Sasaki realizes that he’s made a selfish request to Miyano and apologizes. Miyano wonders why the door was locked. He can’t calm his feelings down now, even when he’s back in class.

But before the festival, Sasaki comes down with a bad cold and, sent to the school infirmary, who should he encounter there but Miyano (he’s burned his hand in home economics). With the nurse not around, Miyano attends to Sasaki himself, and when Sasaki asks him why, he answers, honest as always, “‘Cos I wanna take care of you…”

By the cultural festival, Sasaki’s back on his feet and, as well as serving in the Bad Boys’ Café (his class have to act as delinquents when serving but not in a scary way!), he and Miyano have agreed to go around the festival together (Miyano’s idea). Before this, Miyano visits the Fortune Teller’s tent and gets to ask Hanzawa (who’s using specially designed Bad Boy Tarot cards) how can he become more confident in how he feels. Hanzawa suspects an ulterior motive, even if he doesn’t know what’s underlying Miyano’s question, so tempers his reply rather carefully. “You’re only a step away from being truly confident, right?” he says. “So don’t give up.”

Later, as Sasaki and Miyano are clearing up in school, the firework display begins outside. Alone together in the corridor, their fingers brush, then enlace as the rockets fill the darkening sky with stars. Sasaki rests his head on Miyano’s shoulder. Has something changed between them? Has Miyano finally figured out how he feels about his senpai? The clock’s ticking. And the title of this chapter ‘Their Last Cultural Festival’ is a poignant reminder that Sasaki and his year have almost come to the end of their time at high school.

As with Blue Period, the recent airing of the anime series based on Sasaki and Miyano (Winter 2022) has overtaken the release of manga volumes in English, so it’s inevitable that if you watched the anime, you’ll already know what happens in this volume (and the next). However, this won’t spoil your enjoyment in reading the original version of this slow-burn, slowly evolving relationship story – far from it, because mangaka Shou Harusono’s skill lies in conveying the gradual deepening of feelings between the two protagonists in a believable and endearing way. In the wide field of Boys’ Love there are all shades of depictions of romance between men (as fudanshi Miyano is well aware) and it’s usually the most flamboyant and explicit titles that draw the most attention. So when he finds himself experiencing the full force of feelings that he’s only read about up until now, it’s no wonder that he’s confused.

There’s also a lot to unpack in the implications of what Sasaki feels when he sees Miyano dressed as a girl. Is he just being possessive? Does he not want other people to find Miyano attractive? (Understandable, when Miyano still hasn’t given him an answer to his confession, made months ago.) Or is he being protective, knowing as he does that Miyano was genuinely troubled in middle school about the comments he had to endure about his ‘girly features’ – and fearing that the competition might draw unwanted comments that will only enhance Miyano’s conflicted feelings about his appearance?

One aspect of this relationship that holds the reader’s attention and makes it stand out from so many other BL school stories is the fact that even though there’s discussion about the traditional roles of seme and uke in a relationship (and it fascinates Miyano), Shou Harusono is doing something rather subtle and clever in subverting our expectations. The more we see of Sasaki and Miyano together, the more we realize that it might well be Miyano who will be the stronger, more forceful character if the relationship endures whereas  Sasaki (even though he’s older and taller) is maybe the less self-confident and more sensitive of the two.

The story is still told in a mixture of 4-koma pages and traditional panels – but after the classroom encounter, the captions of the 4-koma pages are telling the reader what Miyano is feeling: Overflowing Emotions. Restless Emotions. A Lot of Confusing Emotions. The Lingering Feeling of His Touch.

Shou Harusono’s art is as captivating as ever; she’s very skilled at catching subtle shifts of emotions in her characters’ expressions and conveying them with a few deft pen-strokes. Her attractive colour work is featured on the cover and two pages inside which positively glow with an autumnal palette. There are plenty of little treats inside, including two Bonus stories, one featuring Hirano and his younger room-mate Kagiura/Kagi-kun (who now have their own series in Japan as well).

The translation for Yen Press is again by Leighann Harvey who also provides translation notes. There’s been some controversy over localisation issues which I feel ambivalent about; they’re usually explained in the notes, which is good for those unfamiliar with terms such as ‘fudanshi’ although I’m not sure that ‘fanboy’ is a direct equivalent. Apart from this, the translation flows well.

Volume 9 is launching in July in Japan. Volume 6 is scheduled for August 2022 from Yen Press, so hopefully, we won’t have to wait too long to see a special image promised by the mangaka in her afterword! 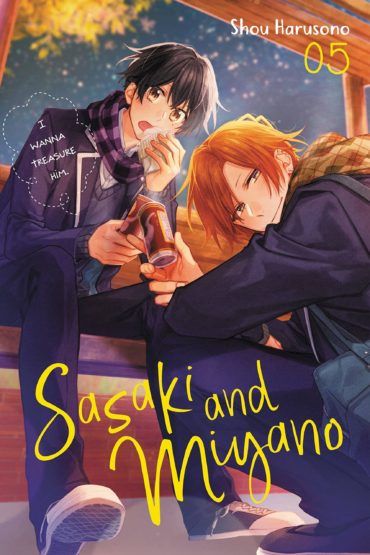