Please note that this review contains spoilers for Volume 8 of Wave, Listen to Me!

When we left Volume 7, Minare and Mizuho were working to help a listener with their shut-in brother’s personal problems, roping in Hiromi who is currently occupying Minare’s apartment, alongside his mother, thanks to some blackmail techniques. The trio are interrupted in their schemes, however, as an earthquake strikes Hokkaido, knocking out power all over the island, leaving our characters to face the darkness.

Mizuho and Minare make their way to Moiwayama Radio Station (MRS) as lead director Mato has a job for Minare to handle – a special broadcast of Wave which will run nonstop until morning. Though Minare is sceptical, Mato explains that by running the show that it will help to calm people’s fears and concerns about the earthquake and its after-effects.

Mizuho is left in charge of mixing for the emergency broadcast – another step forward in her radio career as the two are left to do their thing. Listeners call in with their appreciation and acknowledgement of Minare’s responses and tips for coping with the situation. Her resourcefulness in juggling serious and playful showcases growth, both as a character and radio personality effectively.

In the spirit of hospitality and helping those in need, following the broadcast of Wave and the appearance of his young daughter and ex-wife, Mato is inspired to open the doors at MRS to mothers and their children.

In a similar vein. employees of Voyager Nakahara and manager Takarada, attempt to assess the damage to the restaurant and decide to make the best of the situation and open up a soup kitchen for those without food. This ties into the shut-in dilemma from the previous volume as Junichi is put to work helping out and proves to be a hard worker, despite his initial protests and threats from Minare.

This inspires him to move forward – a theme for the characters in this volume – as he decides to find a proper job (albeit with a rather questionable motive which I won’t spoil here) as his family make plans to move out, inspiring some rare independence.

Tachibana also decides to move on from staying at Nakahara’s apartment as her big break as a comedy writer for HCB radio finally comes around. I’m curious to see what lies in store for the pair moving forward, as their relationship has some potential. if handled well.

The volume concludes on a slightly quieter note than before, with Minare giving advice to a pair of teen listeners trying to understand each other better and also meeting a Glass Trader otaku who is not only a big admirer but is also a former radio production company head, making him a seasoned pro and prime guest to feature on Wave! It’ll be interesting seeing how this new personality affects Minare and her gradual rise through the ranks as a radio host.

Translation for Wave, Listen to Me! has once again been carried out by Adam Hirsch whose work on the series so far has been very solid, especially with the included translation notes and bonus in-character employment application blurb from Minare.

Overall, Volume 8 has the difficult task of resolving the very real situation of an earthquake and its effects on a small island satisfyingly and I think it delivers, whilst also showcasing how key characters, both main and supporting, are moving forward in their professional and personal lives. 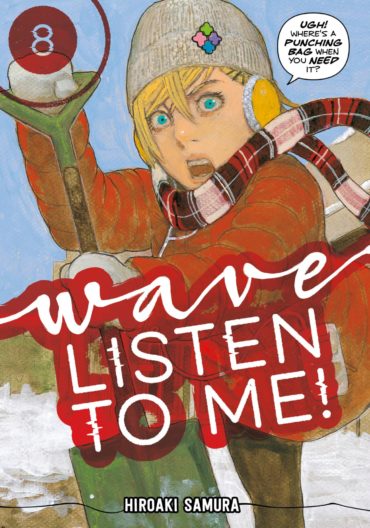 Title
Wave, Listen to Me! Volume 8

Wave, Listen to Me! Volume 7 Review

Volume 7 starts with Minare and Mizuho attempting to resolve a family’s personal struggles but it’s the inclusion of an unexpected story turn which makes for a more engaging read.