To go alongside the streaming of the anime last summer, Square Enix began releasing The Great Jahy Will Not Be Defeated! manga in the West. Thanks to the various problems plaguing the print industry, it has unfortunately taken nine months for Volume 2 to arrive. But now it’s here and it’s time to continue following Jahy in her quest to restore the Demon Realm.

As we reunite with our heroine, we find her boasting to her boss about her having restored some of her magical power, allowing her to stay in her adult form for longer per day. Jahy thinks it’s a huge step in her goal toward restoring the Demon Realm, at least until she talks to her former substrate Druj who mistakenly assumes Jahy’s shard is just one of many she gathered that day and must surely surpass the truckloads she’s been retrieving week to week.

Jahy, understandably, feels somewhat depressed after hearing how easily Druj has been collecting mana crystal shards and ends up lying to save face. Things only get worse for our little protagonist when Druj later spots Jahy at her workplace and Jahy has to stop her boss from blurting out that Jahy doesn’t own the place and simply works there part-time.

On top of that, Jahy has to contend with surprise attacks from Saurva, a girl who wants to take Jahy’s spot as Number Two ruler of the Dark Realm. Luckily for Jahy, Saurva is a bit of a klutz and her attacks almost always fail but of course, that doesn’t make her any less of a nuisance. If Jahy only had to worry about collecting the shards or her acquaintances from the Demon Realm, life would be simple, but of course, she also has to work to stay afloat in Japan.

While a large portion of the chapters in Volume 2 focus on Jahy interacting with Saurva or Druj, there is also a couple of more slice of life-like tales involving Jahy running out of money before payday and coming down with a cold. These are the sorts of things she never had to deal with while in the Demon Realm and both situations suitably humble her, which is important, given most of the time her personality can come off as a little bratty and entitled.

I’m not sure the overarching storyline has moved on at all in this instalment of the series, but taking the time to better develop Jahy and Druj isn’t a bad thing. There is plenty of this series still to come and it’s obvious from having watched the anime, that the plot will move along when it’s ready. Although, on the whole, I’m not sure this book offers the same variety of comedy as the initial outing, which may work against it for some readers.

Perhaps the underlying problem here is that we see a lot less of the boss and landlady this time around, which is a shame since their personalities counteract Jahy better than Druj or Saurva do. Already the series has quite an extensive cast of characters and I think author Wakame Konbu needs to be careful about balancing our time spent with them going forward.

But having said all that, if you did enjoy Volume 1 or the anime (or both!) then you’ll certainly have fun reading Volume 2 as well. It may not stand on its own quite as successfully, but Jahy’s day-to-day antics are still fun to follow. You can’t help but want to root for our heroine, no matter what situation she finds herself in, even if it happens to be a trouble of her own making.

As previously mentioned, The Great Jahy Will Not Be Defeated Volume 2 comes to the West thanks to Square Enix Manga and continues to be translated by Amanda Haley. The translation reads well with no issues to note. Volume 3 of the series is currently scheduled for an English release in July, so fingers crossed it won’t be quite as long to wait to enjoy more of Jahy’s adventures.

Overall, The Great Jahy Will Not Be Defeated Volume 2 isn’t quite as stellar as its debut but there is still plenty to enjoy here. With some important character development for Druj and Jahy, the stories to come should prove even better now we’re growing more attached to this heroine and those around her. 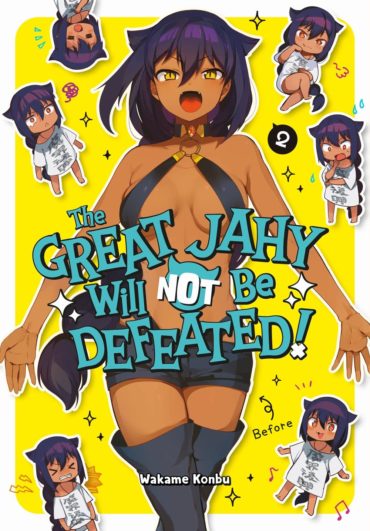 Title
The Great Jahy Will Not Be Defeated Volume 2

The Great Jahy Will Not Be Defeated! Volume 3 Review

In Volume 3 of The Great Jahy Will Not Be Defeated! our heroine finds herself face to face with the dastardly magical girl. Is her peaceful life about to come crashing down once more?!

The Great Jahy Will Not Be Defeated! Volume 4 Review

In Volume 4 of The Great Jahy Will Not Be Defeated! our heroine continues searching for mana crystals while arming herself for any future run-ins with the magical girl! Plus she takes her first trip to the nearby public bathhouse, which proves to be heaven…