Welcome to Kowloon Walled City―a dystopian townscape full of people brimming with nostalgia and a place where the past, present, and future converge.

When we first meet bespectacled Reiko Kujirai, she’s eating slices of watermelon and smoking a cigarette on her balcony in the sweltering heat of a Hong Kong summer morning. This is a particular predilection of hers; she finds the cigarette tastes better after eating the sweet watermelon. Then she’s off to work at Wong Loi Realty Company, a little firm with a boss the wrong side of middle age and one other employee, Hajime Kudou, an easy-going young man. Kujirai and Kudou have something of a prickly relationship both in and out of the office, even though they usually eat lunch together. And it’s while they’re eating lunch that Kudou sees Kujirai putting in eye drops. She’s been having trouble with her prescription glasses – so she’s been using the very popular Hebinuma eye drops. Kudou is sceptical about Hebinuma; the beauty products of the firm are being advertised everywhere, using their little snake mascot (‘hebi’ means snake in Japanese). He tells Kujirai to go and get her eyes tested. When she returns to the office, she’s not wearing her glasses; apparently, her vision is so improved that she doesn’t need them anymore! Their boss is approving but Kudou not so much; he turns away from her, muttering, “I like the glasses better.” However, she’s discovered that ‘when your eyesight improves, you start noticing things you didn’t see before.’ She’s begun to look on her co-worker in a different light, even though his merciless teasing of her doesn’t show any signs of abating.

And then there’s Generic Terra. Floating high in the sky above Kowloon, it’s ostensibly a government project ‘a new world for mankind… based on safe and sophisticated technology, its construction continues to make progress.’ Kudou is sceptical but Kujirai turns up at the office wearing a Generic Terra T-shirt… and they start bickering again.

One thing they do seem to agree on is Kowloon itself. Kudou waxes lyrical when they’re having a smoke on the top of their building, saying as the two gaze out over the city, “The people who live here – they’re all in love with Kowloon. This nostalgic Kowloon. So Kowloon will never change. It shouldn’t change. ‘Cos it doesn’t need anything new.”

However, there’s also been a report of strange noises coming from one of their properties in Naam Caangh Street – with all kinds of theories as to what might be the source, including, inevitably, something scary and supernatural.

Then comes the day Kudou takes Kujirai to the Goldfish Teahouse (with an aquarium) where the smiling barman seems to recognize them and brings over slices of watermelon ‘on the house’. Kujirai can’t resist lighting up and admits that she loves to smoke while eating watermelon. Kudou then says that he knows ‘someone’ else with that unusual habit but won’t be drawn further as to who that might be. Later, he buys her a goldfish (like the ones in the café). She thinks she might be falling in love with him… but when she tries to find her way back there, she can’t locate the place and all Kudou does is tease her for being a realtor with no sense of direction. Something isn’t quite right…

Every now and then, I come across a manga that gives me the chills – good chills! – because it’s such a well-drawn and engrossing read that I’ve reached the end of the volume before I’ve noticed I’ve been turning the pages. Kowloon Generic Romance is one of those rare titles – although as a fan of Jun Mayuzuki’s After the Rain, I already had high expectations. Kowloon Generic Romance is nothing like After the Rain – except, of course, when it comes to the mangaka’s distinctive graphic style, luminous colour work and gift for creating interesting, complex characters. Here, the overcrowded, bustling Kowloon is a character in its own right – and by placing Reiko Kujirai and Hajime Kudou in a real estate firm, they are intimately involved daily with maintaining the bricks and mortar of the place. The crowd scenes depicting Kowloon teeming with life, the high-rise tower blocks squeezed so close together with their washing lines and balconies, the graffiti and posters polluting the narrow alleyways, draw the reader in; you can almost smell the street food on sale. If the publisher’s blurb for this first volume comes across as a little vague, there’s a very good reason for its opacity. Because everything is not as it seems in Kowloon – far from it!

The mangaka is also very skilled at getting the balance between mystery and comedy just right. The little scene where Kujirai persuades the reluctant Kudou into buying and eating crepes (and then insists on taking a photo of him with her smart phone) is one of many brief but telling vignettes that reveal so much about the complicated chemistry between the characters. Just as in After the Rain, Jun Mayuzuki really knows how to tell a story in images as well as dialogue, timing the most impactful images to follow a page-turn.

But why has Yen Press given this an ‘Mature’ rating and shrink-wrapped the copies? I’m more than a little mystified by this. Jun Mayuzuki draws her heroine Kujirai in a very sensual (and some might say, sexualized) way. But there’s nothing here that goes anywhere near matching the M-rated warning given (by Vertical) to the material in Sensei’s Pious Lie or the distressing issues touched on in the upcoming volume of New York, New York.

Amanda Haley delivers a translation that flows smoothly for this attractive Yen Press trade paperback edition, dealing expertly with the Chinese Cantonese vocabulary in the text (Kowloon is in Hong Kong, after all) as well as the dialogue and inner thoughts of the main characters. Abigail Blackman’s lettering helps a great deal to convey all these as well. A page of translation notes at the end is an added bonus: mostly street names and food but interesting, nevertheless. It also contains this explanation: ‘Kowloon Walled City was once the most populated place on earth with about 33,000 people living on 6.5 acres in high-rise towers.’ There’s more… but it would maybe turn into a spoiler of sorts to share it here, just as it would definitely be a spoiler to discuss what happens in the final chapter of the first volume.

Kowloon Generic Romance is one of those rare manga that, while being hard to categorize, is a fascinating and captivating read. There are images which will give readers a genuine frisson – and the ingenious way the mangaka is revealing the story will make them very eager to grab the next volume as soon as it comes out (November 2022)! 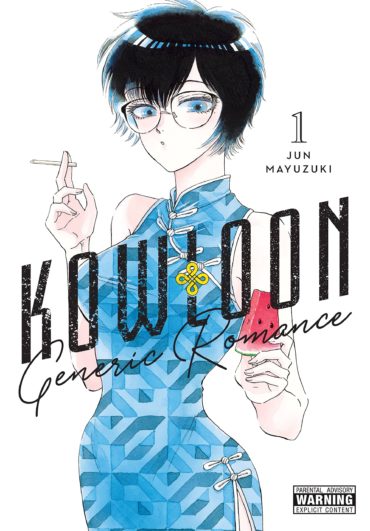 Reiko Kujirai is confused. She has feelings for Kudou, her co-worker in Kowloon Walled City – but he isn’t interested. So why has she found a photograph in a file, showing them together – at their engagement party?