I keep missing my chance to tell him.

Miyano has realized – at long last – that he has feelings for Sasaki. But now that he’s acknowledged the fact to himself, he has no idea how to tell Sasaki. How do you confess to the one you love? It always seems so much easier in the BL manga he likes reading so much.

Looming over the third years is the shadow of college entrance exams (it’s Christmas and the exams take place in January). And for Sasaki and Miyano, the exams also are a reminder of how soon Sasaki’s final year will come to an end. Is the inexorable passing of time the catalyst that causes Miyano to feel the need to confess?

Everyone else has noticed, it seems. Miyano’s friend Tashiro just says matter-of-factly, “I figured you and Sasaki-senpai had started dating,” causing Miyano to do a far too revealing double-take. Then Miyano bumps into Hanzawa-senpai when out Christmas shopping. Hanzawa’s older brother appears and idly asks if the two are going out, causing Hanzawa to overreact, saying firmly, “I can’t stand it when everyone always brings everything back to love.” We learn more about Hanzawa here than at any other moment so far, as he insists to his brother that he likes women. But there’s a question left hanging unanswered in the air; there seems to be a disconnection between the way Hanzawa reacts and what he says. Does he have feelings for Miyano? Later, though, he tells Miyano that his two brothers have come out to their parents as gay. Hanzawa often comes across as a detached observer; we see him through Miyano’s eyes, smiling secretively at something that has amused him but no one else has been let in on the joke. But he isn’t smiling when he offers Miyano some sobering words of advice about the difficulties of being in a single-sex relationship.

Christmas passes – but Miyano can’t stop thinking about Sasaki. He wants to tell him how he feels but there’s always too many people around. Sasaki must be sensing the tension too because a snatched conversation on the stairs at school nearly ends in a kiss. Sasaki retreats, ashamed of his lack of self-control, and when Miyano goes after him, he can’t find him anywhere. Has he gone home? It’s thanks to Hirano and Hanzawa that Miyano is able to track him down (why, after all this time, have these two never exchanged phone numbers?)

The time for hesitating is long past. In a deserted park, Miyano blurts out – at long last – the words that Sasaki’s been hoping, longing to hear. These two – who have been chatting easily away with one another since their friendship first began – find that they have no more need for words as the mangaka delivers five impactful yet wordless pages.

If you’ve already watched the anime, you’ll know exactly what happens in this volume as the TV series has been very faithful to the manga. Here, at last, we catch up to the climax and conclusion of the anime – and the long-awaited sunset confession scene in the park. Even though it’s only in black and white in the manga, the shared feelings will generate a warm glow in readers as this affirmation has been a long time coming. Miyano calls Sasaki ‘cute’ and then he stumbles in his confession, hurriedly changing to “I – I mean cool. I think you’re really cool”. This reversal of expected, traditional BL relationship roles is one of the strong points of the manga and keeps the story feeling fresh and engaging.

After the intensity of the wintry park encounter, it’s back to reality with a bump as Sasaki (like the other third years) has his exams to get through. In what – for this reader, anyway – is the most touching chapter in the book, Miyano gets up early to go through the snow to see Sasaki off to school and wish him ‘good luck’ on the station platform. This little chapter shows what Shou Harusono is so good at: capturing those ordinary little moments that go to establish and then cement a relationship and making them special. And it bodes well for where the mangaka takes the story next: if everything in the previous chapters was building up to this volume (‘the boy who loves reading BL denies vehemently that he’s ever felt that way himself in real life, eventually realizes that he’s been in denial – and confesses to his best friend/senpai’) readers will want to see how this relationship deepens and develops.

Leighann Harvey continues to provide a convincing translation of the series for Yen Press and provides two helpful pages of translation notes at the back. The lettering by DK copes well with the many different challenges the text provides, from internal monologues to phone conversations. The mangaka’s afterword is filled with interesting reflections and even a brief tempting preview of what’s coming next in Volume 7 but is printed in the tiniest font ever (like the bibliographic details on the back page); I had to resort to a magnifying glass to read it! Yen Press again provide two attractive colour pages at the front; Shou Harusono has a gift for using colour to enhance her drawings and these two images of Sasaki and Miyano half-awake in early morning (facing us) and glimpsed from behind yet holding hands are delightful.

There are two bonus chapters, including one that’s sure to please the Hirano and Kagiura fans. And in the mangaka’s afterword, she confirms that she had originally planned to end the story at this point but then she started thinking that it was unfair to make Sasaki wait so long for Miyano’s answer without then giving him any reward, so…

We’re going to have to wait till February 2023 to find out what happens in Volume 7 – but fans of Sasaki and Miyano need not despair as Yen Press are bringing us the first volume of the spin-off Hirano and Kagiura in November 2022, followed by the novel in February. Yen Press, you’re spoiling us! 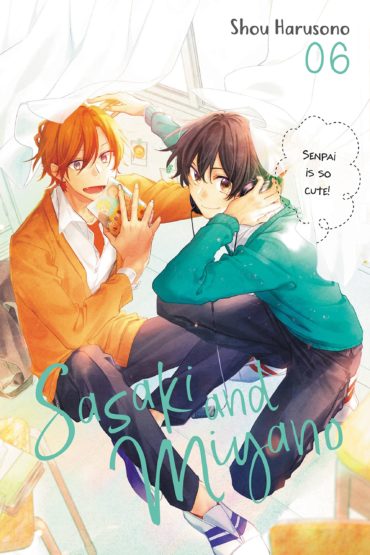