“I would like… to study piano with you.” Geoffroy Lambert to Fuyuki Kanda.

Fuyuki Kanda – retired concert pianist – has had his solitary widower’s life turned around since he became the owner of Fukumaru, an Exotic Shorthair cat and bundle of feline energy. Currently cat-sitting Marin as her owner, rival/friend pianist Hibino is on tour, Kanda is surprised to receive a phone call from another younger concert pianist, handsome Geoffroy Lambert who – up till now – has treated him with hostility and disdain. Kind-hearted Kanda agrees to Geoffroy’s request to study with him, although he is confused by this change in attitude and can only wonder what’s provoked it. Geoffroy is the son of yet another renowned concert pianist, Gustave Lambert who, although Kanda’s senior, has always held the Japanese musician in high esteem – and this might have caused the younger man’s strong feelings of resentment. (Or are they maybe admiration?) Geoffroy has convinced himself that the only way forward (and to win his father’s admiration) is to ‘become Kanda’.

After jetting in from Europe, Geoffroy is on his way – though the rain – to Kanda’s house when he hears a pitiful mewling sound and spots a cardboard box containing five tiny kittens. So when Kanda opens the door to Geoffroy, he sees that he has an armful of wet furry creatures just as Geoffroy blurts out, “Can these kittens stay here? I promise to adopt them!!” After a moment’s utter stupefaction, Kanda breaks into a big smile and says, “All will be well! You leave the kittens to me!”

Kanda has little time to stay surprised by the dramatic change in Geoffroy’s attitude as he’s concerned by the condition of the abandoned kittens and gets them to the vet’s without further delay, where the vet confirms that the fate of the tiniest and weakest one of the litter hangs in the balance.

When they’re back at Kanda’s house, however, the next issue to arise is how will Fukumaru (and Marin) react to the sudden arrival of these five little furry interlopers? Will Fukumaru tolerate the presence of strange cats invading his territory? And even though they’ve been rescued, who’s going to care for the kittens? If Geoffroy wants to keep them, he can’t send all five back to Europe together. Will he be able to find homes for them all in Japan?

Another warm-hearted volume of cat-themed chapters from Umi Sakurai confirms that her blend of human interest and pet-related stories still have the ability to stir the readers’ emotions – if anything, they’ve made us even more attached to kindly Mr Kanda and feisty Fukumaru. Some of the flashbacks are illuminating and affecting: Fuyuki Kanda asking himself what his late wife would have done; Geoffroy remembering how he could never bear the thought of having a pet and getting attached to it because it was going to die before him.

Sakurai’s insights into the lives of performing musicians – in this case spotlighting Geoffroy and how he perceives his relationship with his audiences – are also convincing and realistic. But above all, this is a volume that looks at the relationships between parents and their children; there’s a gulf between Geoffroy and his father – is there any way of bridging it?

On the feline side of the narrative, watching the older cats react to the sudden arrival of five kittens is amusing and touching as well. The 4-koma brief sketches that come at the end of most chapters continue to show snapshots of daily life with a cat in the most realistic way, including Fukumaru’s tendency to do a lot of noisy scritching in his litter tray at all hours of the day and night.

The translation for Square Enix Manga is again by Taylor Engel and, aided by Lys Blakeslee’s lettering, ably conveys all the different voices (feline as well as human). Volume 7 has four glossy colour pages, two at the front and two at the back. The mangaka’s afterword deals mostly with her reactions to the filming of the manga as a live-action TV drama and her excitement at meeting the actors and the pianist.

The volume ends with another unexpected arrival: a somewhat dishevelled and strange young woman. Who is she – and what does she want? 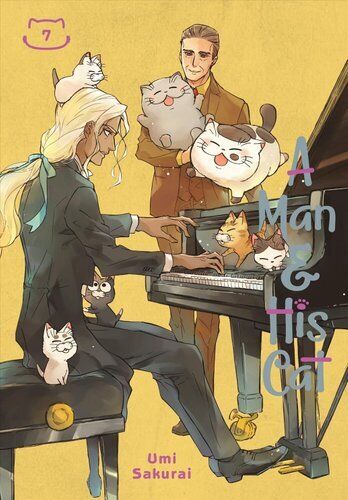 Title
A Man & His Cat Volume 7