Two boys sharing a room in a high school dorm: not-yet sixteen Akira Kagiura, bad at getting up in the mornings, hates eating peppers and lives to play basketball… and his senpai, seventeen-year-old Taiga Hirano with a bad boy aura, bleached yellow hair and pierced ears. But in spite of Hirano’s scary exterior, he’s looking out for his underclassman, waking him every morning when he has problems getting out of bed, showing him the ropes around school – and Kagiura has developed a genuine affection for him. But when Kagiura is laid low with a really heavy cold, he still insists on going to team practice because there’s an important match coming up – until Hirano has to lay down the law. Being a caring senpai, he tells him, “Sleep a whole bunch, eat a lot of food and… get through this in one day!” and brings him nourishing rice porridge with egg to aid the recovery process.

However, when Kagiura returns to the team, he fails to score a significant goal leading to the team failing to qualify for an upcoming tourney and he just can’t forgive himself. Hirano comes across him obsessively practising shooting on his own (and without permission) in the gym after class and joins him, wondering what’s troubling his usually cheerful roommate. Eventually it comes out; Kagiura is asking himself if he missed the crucial shot because he was still ill. This causes Hirano to wonder if his well-meaning advice to his kouhai to get back on his feet in a day was ill-advised. But he’s mature enough to reassure Kagiura that there will be other opportunities in the future and he’ll have to make sure to take care of himself. And all continues peacefully for a while… until it’s time for the second years’ class trip – and Kagiura really doesn’t want Hirano to go away. How’s he going to manage to get himself up in the mornings? Hirano’s already got his hands full taking care of Sasaki who gets travel-sick and has forgotten his meds. They’ll only be apart for a few days. Surely Hirano can learn to fend for himself?

Here it is at last, the much-requested spin-off series to Sasaki and Miyano. According to mangaka Shou Harusono’s afterword, it was the ten-page extra chapter at the end of Volume 2 of Sasaki and Miyano featuring Hirano and Kagi-kun that inspired all the requests – but do these two deserve a whole series of their own? Well, yes – although new readers might want to check out the main series first, because seeing the interactions between the second years is much more meaningful in the context of what we’ve read before (or watched if you’re coming fresh from the excellent TV series).

If you’ve already met everyone (there’s only one new character, Kagiura’s first-year classmate, red-haired Juuya Niibashi) you’ll love these glimpses into the lives of the second years, especially during the class trip with poor travel-sick Sasaki. We get to see a lot more of Masato Hanzawa too, the cheerful (on the outside, anyway) disciplinary committee member with the enigmatic smile that rarely reveals what he’s thinking. Above all, though, the spotlight falls on the growing friendship (or is it more?) between Kagiura and Hirano. There’s no doubt that Kagiura idolizes his senpai; when the second years are away, he tells his sceptical classmate Niibashi that he’d like to marry Hirano, “Because then no one else can take him from me.” However, in spite of Kagiura’s bold statement, this manga brings us yet another slow-burn BL relationship, just like the main series. Shou Harusono’s skill lies in showing us how the everyday interactions between her characters might be the start of something far deeper than friendship… or might fizzle out because of the difference in ages and year groups. Remember how interested Boys’ Love fanatic Miyano is in the relationship between the two, because ‘two boys sharing a bedroom’ is the starting point for ever so many BL romances? The mangaka is definitely enjoying herself, playfully toying with readers’ expectations that Something is Bound to Happen!

Some helpful extras at the end of the volume include two pages of illustrated character bios and a timeline (with spoilers) to show where the chapters intersect with the storyline of Sasaki and Miyano. There’s also a 4-koma featuring Hanzawa and translation notes.

Due soon (in February 2023) is Hirano and Kagiura the novel (which originally came out a year before the manga in 2018), also licensed by Yen Press for their Yen On list, and there are three more volumes out in Japan of this ongoing manga series (the afterword refers to a hiatus but that was in 2019).

Leighann Harvey again delivers a very readable translation of a text that’s almost exclusively the day-to-day banter of high school boys. Yen Press has delivered an attractive volume that matches the others in the ongoing Sasaki and Miyano series with four colour pictures at the start, showcasing Harusono’s skilful use of radiant colour. This is a delightful first volume that’s bound to please the fans of her main series but also makes a good starting point for new readers; it certainly pleased me! 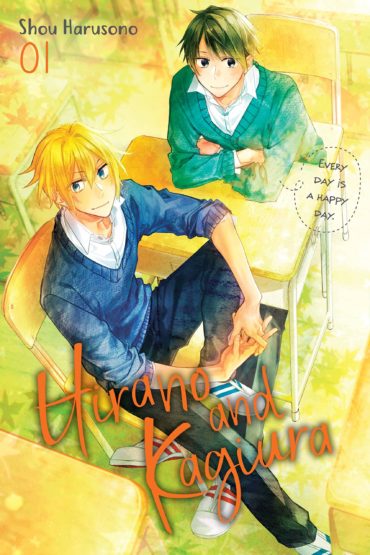