It’s been a while since I’ve had a new shonen series to review for the site, partly because we’re currently inundated with isekai and romance titles. Today I’m here to take a look at Tokyo Aliens Volume 1, the latest debut from Square Enix, to find out if it’s a must-have for fans of the genre.

The story follows first-year high school student Akira Gunji who loves manga and dreams of following in his late father’s footsteps and becoming a police officer, despite his subpar grades. On the way home from school one day, he finds himself caught up in a battle between an alien and Sho Tenkubashi, a member of a secret division of the police that deals with aliens.

The alien (called Tomiko Fujiwara) gets away from Sho before being captured and takes Akira home, having mistaken him for an alien too. As it turns out, Tomiko is being hunted for still being on Earth despite having an expired visa, but with her human husband moments away from dying, she doesn’t want to leave his side.

Having lost his father, Akira sympathises with Tomiko and resolves to stand up to Sho when he finds her home. But now he’s caught up in the world of aliens and secret organisations, Akira’s life can’t go back to the way it was before and in fact, the best thing for him to do might be to join the team himself…

So far, so standard setup for Tokyo Aliens. An unsuspecting student finds themselves caught up in something fantastical, but to the series’ credit, the beginning is relatively well thought out compared to others in the genre. Thanks to Akira’s father having been a policeman, he already has all the understanding of the job Sho and his teammates (that we meet later) do. Plus, having been preparing to work the same job in the future, Akira already has a lot of the skills required to join the team.

Not only are the characters and premise relatively well thought out, but the setting of Tokyo perfectly fits the sci-fi angle the author is going for. In a crowded city like that, it’s no surprise that something extra-terrestrial could be happening in the darker underbelly. Nor that there is a special police force tasked with dealing with the problems that may arise. It works well as something we can relate to in our everyday lives, but still has the leeway to lean into the fantastical.

It helps that before we get into Chapter 1, we’re treated to a short action scene with Sho that gives us a taste of what’s to come once the initial setup is over. Mangaka Naoe is talented, having honed their skills on long-running Aoharu x Machinegun (available from Yen Press), so the action scenes are striking and easy to follow. Tokyo Aliens runs in Square Enix’s GFantasy magazine (Black Butler, Toilet-Bound Hanako-kun) so perhaps it comes as no surprise that the artwork would be a big selling point of the series.

The mangaka’s drawings are detailed and attractive. I like that Sho and Akira’s character designs contrast quite drastically, with Sho having black hair and Akira white, perhaps symbolic of their standoffish and caring natures respectively. It helps that Akira doesn’t look quite human, which ties into the fact characters keep offhandedly mistaking him for an alien (clearly something we will learn more about in the future!). Both Sho and Akira are fairly typical archetypes for this genre, but nevertheless, they both prove likeable within this first volume. It’s hard not to root for Akira when he’s so earnest and a bit of a goofball, something the author does a great job of conveying with the artwork.

The only problem with this volume is that so much time is spent setting up Akira and Sho that it’s not clear what the future of the series will look like. Will we get a lot of action scenes? Will it go harder on mysteries and investigating? It’s really difficult to say since we’ve seen a bit of everything, but if you like the genre and the characters, this is unlikely to put you off.

Tokyo Aliens Volume 1 comes to the West thanks to Square Enix Manga and has been translated by Andria McKnight with lettering by Bianca Pistillo. The translation reads well with no issues of note. This release includes a colour page at the beginning, which is always a welcome sight! The series is ongoing in Japan at five volumes and Volume 2 of the English release is currently scheduled for February 2023.

Overall, if you’re a fan of the shonen genre then Tokyo Aliens is highly recommended. While it’s unclear what the future holds for the story and there’s nothing we haven’t seen before, it has a solid foundation to work from and I think the time spent setting up the cast and setting will pay off down the road. There’s a lot to like here, that’s for sure.

A free preview can be found on the Square Enix website here. 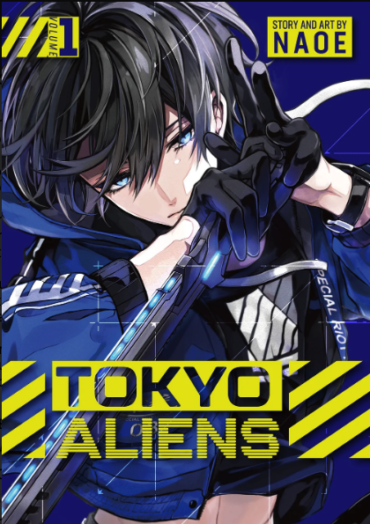