Usato is a high-school student. One day while he’s walking home with the school’s council president, Suzune Inukami, and vice-president Kazuki Ryusen, they find themselves suddenly transported to a fantasy kingdom, [so] starting their isekai journey.

But… drum roll, please… Usato is not one of the heroes that the kingdom called forth. He was just a passer-by who remained entangled in the magic circle used to summon the true heroes, Suzune and Kazuki. Too bad that there’s no way for Usato to go back home, so he needs to stick with his peers. However, this is not the end of Usato’s adventure but just the beginning. In fact,  when he tries to measure his magic power, to everyone’s surprise, he shows an aptitude for healing magic.

It should be a good thing, right? Well, apparently many people don’t think so, not even the king. Healing magic is useful, especially while preparing for war against the demon king and its army, but Rose, the leader of the rescue team, is a nightmare per se. When she gets wind of Usato’s aptitude for healing magic, she sweeps him off his feet (literally) and forces him through a training more brutal than the training regime the heroes are going through. Can our unwillingly summoned passer-by survive?

The Wrong Way to Use Healing Magic is a light read, with many scenes making its readers wonder why something is happening as it’s just so ridiculous, but at the same time being so extreme that it cannot help but endear you the characters and the situation. Usato was a loner in his world. However, here he becomes friendly with a lot of people, and in a sense finds a voice for himself. Suzune and Kazuki too take him under their wing, although he doesn’t really need it. Usato never really talked to them before, until some rain pushes them together and in this situation (yes, it all started because of some rain). But now that they are alone, they can’t do much but support each other.

A character that really intrigued me in this volume was Rose. She’s strong as shown by the fact that the king’s army, the king himself and even the demons are somewhat scared of her. However, she doesn’t want to be on the battlefield anymore. We get hints of what has happened, but her story is not told yet. Her focus is now on training Usato to make him the best healer ever. If she has to beat him up a few times (or hundreds) to make sure he learns, she’ll do it without hesitation. I’m curious to see her story and what will become of her.

I usually go for manga of any genre as long as there is some romance involved, but in this volume I had no such luck and there is no indication whether a love story will develop with Usato and another character. I guess I’ll just have to wait to find out.

This series had a lot of hype as an anime is in the works. I thought the manga to be decent, and I haven’t found the same issues as our reviewer did with the light novel, however, I agree that some of the characters’ voices are not easily distinguishable. It’s certainly easier understanding who is speaking thanks to the character illustrations, but sometimes you still have to deduce who’s saying what and to whom. Like at the beginning, when Usato, Kazuki and Suzune are still in their world, and it seems that Kazuki and Suzune are speaking with each other, when actually the conversation is directed toward Usato. I definitely think The Wrong Way to Use Healing Magic works better as a manga than as a light novel as many of the issues encountered in the book are minimised thanks to the illustrations. Moreover, I believe it’s better to read this story in manga format because many elements that made me laugh were due to the characters’ expressions, like when Rose “kidnaps” Usato to train him or when Suzune and Kazuki see the training that Usato is going through, which are only visible thanks to the art.

The Wrong Way to Use Healing Magic has been written and illustrated by Kugayama Reki, with the original story by Kurokata and the character design by KeG. It has been published in the English language by One Peace Books with a translation by Kristi Fernandez. 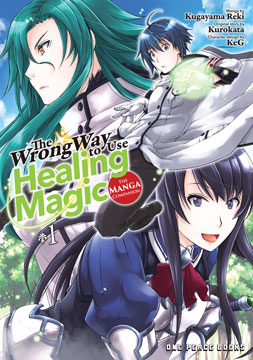 Title
The Wrong Way to Use Healing Magic Volume 1

Overall Grimgar: Ashes &Illusions might seem like just another entry in an overcrowded genre but thanks to some quality writing and love from A-1 Pictures, it stands out as one of the best. Even if you’re feeling burnt out on isekai titles, I’d strongly recommend that you give Grimgar a chance.

In Another World With My Smartphone Review

If you’re a fan of In Another World With My Smartphone’s light novels then this adaption won’t disappoint, and, likewise, fans of the isekai genre will find a lot to like here. The show delivers what it sets out to do and, despite its shortcomings, is a genuinely entertaining watch.

An entertaining yet woefully uneven follow up, Overlord II will no doubt divide fans, yet those willing to overlook the flaws will certainly find something to enjoy.