Readers may already be familiar with author Fujino Omori, thanks to his popular light novel series, Is It Wrong to Try to Pick Up Girls in a Dungeon? (DanMachi). Until now Omori has kept himself busy with that series and its various spin-offs, but recently he’s teamed up with mangaka Toshi Aoi to create something brand new in the form of Wistoria: Wand and Sword. Does it prove a must-read? Let’s find out!

Our story follows protagonist Will Serfort who attends the Regarden Magical Academy while chasing his dream of becoming a Magia Vander, a magician who stands above all others. Unfortunately, Will has absolutely no magical talent to speak of – in fact, he can’t use magic at all. The only reason he hasn’t been expelled from Regarden so far is simply due to the fact he’s very talented with a sword and has been earning credits on written work and defeating monsters in the dungeon that lies below a mighty tower in the centre of the city.

With credits related to spellcraft completely out of the question, Will’s friend and teacher Professor Workner fears he’ll fail to graduate, never mind become a Magia Vander. However, Will’s not prepared to give up as he’s driven by a childhood promise to stand alongside friend Elfie, who became the youngest ever Magia Vander and is waiting for Will to catch up to her and stand with her at the top of the tower.

If you like shonen manga then the set-up for Wistoria: Wand and Sword will feel very familiar to you. It’s a zero-to-hero storyline with a plucky protagonist who has the odds stacked against him and hopes to overcome them with a talent not readily accepted by society. In this world how powerful your magic is determines how successful you are, so for someone with no magic, Will is constantly discriminated against by those around him. Even some of the professors at the academy are eager to get the poor boy expelled, no matter what lines they have to cross to accomplish it.

This may be your fairly average underdog story, but it’s backed by solid world-building and a likeable main character. There’s clearly a lot more to the history of the Magia Vander and the Dungeon than we currently know, but Omori chooses to drip-feed us the information while focusing on Will’s adventures in the dungeon and around the school. Particularly here in Volume 1, I think that was the right choice rather than overloading the reader with too much at once.

Dungeon diving and facing off against powerful enemies is where mangaka Toshi Aoi gets to show off their skills, which are impressive, given this also serves as their debut series. Fight scenes are both easy to follow and to get immersed in as Will navigates tricky magical attacks while searching for an opening to fight back with his sword. There are some intense double-page spreads too, which adds to the excitement of watching these scenes unfold before us. Certainly, as Will goes up against stronger enemies, I imagine the artwork will evolve to become even better, which makes me excited for the future!

Where the artwork does struggle a little is with the character designs, which aren’t very original and quite reminiscent of Harry Potter and other Western magic academy stories. Since this is a school setting, everyone wears the same uniform and there isn’t a lot of individual customization, so once we end up with a more extensive cast, I do worry it will prove difficult to remember who’s who, unless this changes. There’s plenty of time to be proven wrong there though, so I don’t think it should be a reason to not pick up Volume 1.

If you’re looking for something new from Omori, then this isn’t it. The series shares several similarities with Omori’s DanMachi franchise, including the dungeon element and the tower in the centre of the city. I don’t think that’s a bad thing, given how long Omori has been polishing this concept and how that experience pays off here, but all the same, it’s worth bearing in mind if you are someone who disliked his other work or doesn’t want something similar to it.

Wistoria: Wand and Sword Volume 1 comes to the West thanks to Kodansha where it has been released in one of their larger format books, which the artwork certainly benefits from. This release has been translated by Athena and Alethea Nibley with lettering by Sara Linsley. The translation reads well with no issues to speak of.

The series is ongoing in Japan with six volumes and Volume 2 is currently scheduled for an English release in February. The series currently appears to be on a near monthly release schedule in English until Volume 6 and has forgone a ‘digital first’ release to debut in print/ebook form at the same time. This does make me wonder if there is an anime announcement imminent, which would be exciting!

Overall, Wistoria: Wand and Sword may not offer anything particularly original in the shonen genre but it’s still a worthwhile read if you’re looking for something that ticks these boxes. Certainly, if you’re an existing fan of the author’s other work, then you’ll want to pick this up to see what fate has in store for our protagonist in a world where the sword proves mightier than a wand. 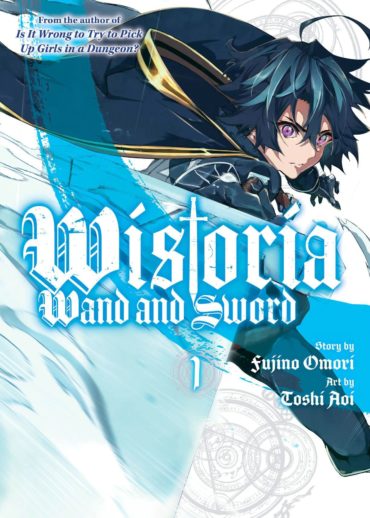