First, and before all else, whether you’re Gothic or not, whether you like Gothic culture or not, I hope you will read and enjoy this article for its emotional and philosophical weighing of a fairly significant modern subculture. Article proper:

There is currently a topic on the forums of Anime UK News, asking whether anime is better suited to delivering series inspired by Gothic or gangster and hip hop culture, or whether the adherents of one are preferred to the other, on which I feel implored to offer my opinion.

Not precluding the interest some might have in gangster and hip hop culture influenced anime (Afro Samurai and Samurai Champloo, for example), I’m nonetheless going to focus on the use of Gothic culture in anime, which I think is both more interesting, and the superior of the two. Culturally, at least, the Gothic is more developed, more articulate, and has demonstrated a wide range of poetic beliefs and ideas, while being, for me, at least, the more sentimental and empathetic of the two. Briefly, however, I’ll have to outline my vision of Gothic culture, so readers will understand that regardless of whether I’m technically wrong or right by contemporary estimation, I am offering an alternative opinion on the Gothic, which could only be judged against other personal or critical opinions of the same interest, however unequal their standing.

Asked by a friend what Goth actually is, I replied that it’s a name given to various artistic and cultural styles throughout medieval Europe and today; the architectural style (prominent between the 12th and 16th centuries, and revived between the mid 18th and early 20th centuries), Romantic and specific pre-Romantic literature (the graveyard poets and Gothic literature), the contemporary music genre and subculture, as well as its accompanying fashion. Gothic is a word which evoke any or combinations of all of these largely unrelated artistic and philosophical movements of the past, or envisages them as the expression of a Gothic psychology. In many ways, however, the modern Gothic subculture can be observed to take influence from these movements, bringing them together in its philosophy and aesthetics. Gothic culture may have been resurrected by the punk music scene in Britain, but it wasn’t born out of it, and reaches back to remote and even prominent parts of the world and its history – William Blake and Samuel Taylor Coleridge have more to say on the Gothic than almost all of the bands today, and the Old Testament is almost the essence of the Gothic (a Chrsitian friend insists that “the church is the birthplace of the Gothic”, and indeed, this is where the architectural style first took root).

What I’m trying to say is that by whatever invention, the modern incarnation of the Gothic, the subculture, its aesthetics, philosophy and nature, are in fact remote from the various artistic styles of the past, in a sense, but also seeks to unify them, giving rise to the confusion around the term Gothic today. The Gothic subculture is much more than an affront to wilful depression and self-imposed exile, or dejection and social exclusion, dressed from head to foot in black and cultivating lygophilia – it is, in the academic sense, a philosophy, observing the world in particular terms, however undeveloped the thought behind it truly is. Darkness, fragility, pain, morbidity, emotion, solitude, exclusion, suffering, nobility, pessimism, sensuousness, fear, lust, jealousy, power, madness, spirituality, the elaborate and decadent are all parts of Gothic culture, shown at one point or another, in varying degrees at different times, expressed in decoration of the Gothic, its sensual drapery and period features, or the minimalist fashion of black clothing, accentuating the iconic and almost sanctified pale skin of some members – a further mark of solitude and retreat into darkness, and another archaism, given the love of pale skin in times past, contrary to the modern love of bronzed skin and tanning.

Anime is concerned much more with the latter parts of the Gothic, even as it departs from the modern subculture (as it inevitably does), but less so in its artistic and historical past, however ingrained they are in western Gothic culture. The emphasis is on the features, rather than the philosophy of the Gothic, with its aesthetics, sensuality and language being displayed in abundance, but not inheriting any principled artistic vision, or an articulation of its beliefs. In this sense, I believe that Japanese employment of the Gothic is still largely ignorant, or rather, perhaps, unconscious, and based on imitation or interest, as much as understanding. This is a common feature of Japanese culture, which ended its isolationist policy after the second World War, leading to massive interest in foreign cultures and thinking, as new ideas and products entered the country, leading to the conditions that made it the economic miracle of past decades, but also having a profound and Westernising effect on Japanese society. Notwithstanding that Japan is as unique as it has now become more comparable to western economic superpowers, the point remains that Japanese culture was flooded with new and foreign thinking, which in many places seems imitated and taken to new extremes, rather than advanced intellectually, at times. Even the music industry suggests the same, with the visual kei bands who represent the Japanese equivalent of the Gothic music genre seeming to imitate rather than develop its ideas of beauty, imagery or stylings.

Mana, of the famous visual kei bands Malice Mizer and Moi dix Mois, is frequently credited with coining or inventing Gothic lolita fashion, based on his own clothing lines. Gothic lolita stands out as an important manifestation of the Japanese Gothic culture, but is similarly removed, to a large extent, from any particular Gothic values, and is perhaps more appropriately rendered in terms of the Japanese obsession with visual identity (the adoption of formal suits by the Japanese business class again seems a widespread unconscious pursuit of western thinking, and says more about Japanese visual identity than the qualities they’re intended to embody). No where is this more apparent than in anime, which represents an obvious contrast with the blunt, and at times ugly figures seen in traditional Japanese art and ukiyo-e woodblocks. One of the major features of anime is its aesthetics, the almost unattainable standard of beauty it perpetuates and its exaggeration of human features. But the aesthetics of anime are themselves incredibly Gothic at times though, and are reminiscent of Gothic aesthetics, even when the series has no real emphasis on the Gothic, which is as equally concerned with beauty – if a little more diverse in its treatment of it. I would also suggest that some of the substyles within anime owe more to Gothic ideas of beauty than most people realise, or are broadly similar to them.

Contrary to this, however, there are very few specifically Gothic anime series or films, but I would argue that the interaction of the two is, more often than not, cultural, as opposed to philosophical, and psychological, as opposed to consciously overt. Anime occasionally borders on the Gothic, with Bleach, Deathnote and Ergo Proxy being subtle examples, or Gilgamesh, Hellsing and Vampire D being more blunt instances, but I now believe that the real measure of the Gothic in anime and Japanese culture is psychological and aesthetic, with the imagery we see in anime owing much to Gothic ideas of beauty. This considered, I still find anime with Gothic stylings more interesting and thought provoking than hip hop or gangster culture influenced anime, and for its suggestions of poetic beauty, its lavish aesthetics, sensual nature and contrast, the more enjoyable. 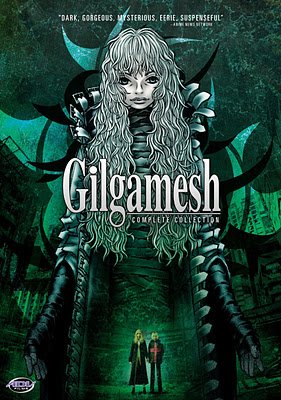 Fangs out At Midnight: Anime and Manga’s Best Vampires

With the Twilight series getting a new novel in August, the team at Anime UK News recommends their favourite vampires to sink your teeth into

Gilgamesh is a unique sci-fi thriller drawn with such a strange gothic aesthetic; echoing the ancient myths on which its story is based, this is a decidedly odd looking anime that gradually unsettles the mind and drowns our senses in a dark, decaying bag of shrouded mystery and unfathomable terrors. Years ago a global catastrophe … Continued

@ Full Moon Volumes 1 & 2 David is a vampire; Marlo is half vampire, half werewolf. The young men have been close friends since childhood and in the two volumes of Sanami Matoh’s light-hearted bit-lit manga series ‘Until the Full Moon’ they fall in love and get married. Oh – sorry – forgot to … Continued

Win One Piece, Hellsing and Supernatural on our new competitions!

Enter our new competitions for a chance to win One Piece, Supernatural or Hellsing Ultimate!

A blood-soaked romp, Hellsing Ultimate is the pinnacle of action anime, providing nonstop thrills from beginning to end, and is well worth sinking your teeth into