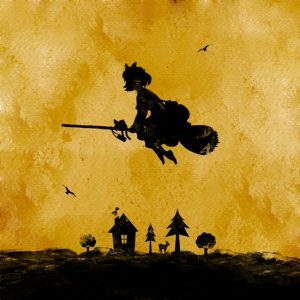 Studio Ghibli has been a household name in Japan for many decades now but its movies have touched many hearts across the world, especially in the UK, where several playwrights have taken the magic of Studio Ghibli and transformed them onto the stage for the young and old to enjoy. Back in 2013 Whole Hog Theatre did a sold-out performance of Princess Mononoke, then Howl’s Moving Castle was the Christmas show of 2011 for Southwark Playhouse, and now in 2016 they’ve gone back to Miyazaki’s creative well for Kiki’s Delivery Service.

The play follows the main plot points of the film for the most part. Kiki is a 13-year-old witch; by tradition this means she must leave home to start her training away from the family. She packs up her broom and cat Jiji, then flies away until she stumbles upon a great city and quickly loses herself in its busy nature. She meets Osono, a pregnant baker who gives Kiki an opportunity to start her own business: a delivery service using her flying skills to get any item to where it needs to go. As the year passes Kiki’s personal and magical skills are put to the test and her relationship with Jiji is changed forever.

The play is 1 hour and 15 minutes, without any break in between. As it’s aimed for ages 7 and up, the short running time works in favour of little children who will no doubt enjoy the energetic performances and sweet story. However, considering that the play is 27 minutes shorter than the original Ghibli movie, the plot moves at a breakneck pace (weeks passing by in mere seconds) and cuts a lot of corners. The most noticeable is where characters are cut out entirely; there’s no Ursula or Fukuno, no female white cat to distract Jiji, and a lot of the customers are one-offs that never return or are merged into the dance number midway to show the passage of time when Kiki’s business takes off. Despite the cast having only six actors in total, the city still bursts with life and Kiki’s story never feels empty on stage. Admittedly it’s distracting at first having all but one actress (Alice Hewkin, who plays a delightfully animated Kiki) playing multiple parts and often one after another; for example, the actor who plays Kiki’s father is also the mayor of the city as soon as Kiki flies away from home. Some male actors even play female roles (which got a few chuckles out of the audience). But it’s a triumph for the actors that they can change into an entirely different costume in such a short space of time, sometimes helping moving props/set pieces in between, and act a completely different age range from the previous scene; the actress who plays Kiki’s mum is also an 8-year-old boy in the very next scene, then jumps into the role of a teenage girl character just after that.

The small time frame of the performance also affects the plot; although the main emotional points in Kiki’s coming-of-age tale stay true to the movie, the deliveries themselves and some of the dramatic scenes have changed completely. This is understandable considering that in the original film the climax involves a large blimp, and the way Kiki loses confidence in herself no longer ties into being unable to attend parties that Tombo invites her to, which would require another set change and more characters to cast. This sadly has the trade-off of losing a lot of the quiet moments and emotional cues between Kiki and other members of the cast, but instead we’re treated to many creative ways that the team can make Kiki fly and bring the magic of being a witch to life. In the beginning, she’s lifted by the stage handlers and/or Jiji’s puppeteer with sound effects to back it up, but later on we’re treated to wires lifting Kiki up high for a more magical trip, then we have miniature puppets for the newly-constructed and cleverly portrayed moving train sequence, and the play’s unique climax uses a projection onto the clock tower and audio recordings (sadly this did not work as intended during my viewing of the performance due to a technical fault, but you could see what they were going for). All the different tricks they used to make Kiki fly made the act itself never get boring and it was always a joy to see what the team came up with next.

The original movie is a simple story with an easily understandable emotional core, based upon a book series that was also made for children, so the stage version keeps to that, despite its changes and fast pace. Nevertheless, there are a couple of somewhat controversial changes that may have hardcore Studio Ghibli fans debating after the final scene. First of all, the stage makes use of several pop songs, all instrumental. They go hand-in-hand with the dance numbers but are still a tad jarring when compared to the score of the original movie. Also, there’s Jiji; he’s handled by the very talented Matthew Forbes who hands-down stole the show for me, making the movement of the puppet as graceful and agile as a typical cat would be and it’s always fun to see him doing little fun things on stage as the other characters continue the story. It’s also very clever how the puppeteer was dressed in an outfit that reflected the cat’s personality, rather than just in plain clothing. What’s controversial about him, however, is that Jiji seems to be a mixture of the Japanese and English versions of the character; he has a lot of the faithful and supportive nature of the Japanese Jiji whilst also having quick tongue and tone of the late Phil Hartman when he performed in the role. Then there’s the ending of his arc which combines the original and dub changes; that it ‘tries to have its cake and eat it too’ is the least spoiler-ish way I can describe it. However, it’s nicely handled and closes both his and Kiki’s emotional arcs in a way that’s true to the original. Considering that it’s a touchy subject for film fans, it may be debatable among those who see the play as well.

Kiki’s Delivery Service is a delightful story which translates onto the stage in a magically creative way, and although some of the musical cues and story choices may not be everyone’s cup of tea, it’s a fantastic performance from the whole cast and truly a lovely experience to have this Christmas. If you only have the budget for one play this holiday, or don’t normally go to the theatre, treat yourself to this. Don’t miss it!

See Kiki’s Delivery Service at the Southwark Playhouse from 8th December 2016 to 8th January 2017, including matinees. Purchase your tickets here.

British television viewers have been spoiled this summer with Film4’s screening of Ghibli classics such as Spirited Away and Nausicaa of the Valley of the Wind. This week, as the summer holiday winds down, two of Studio Ghibli’s best films, plus Tales from Earthsea, get aired: Tuesday 01 September 4:20pm – Kiki’s Delivery Service A … Continued

It’s a Hayao Miyazaki film – instant 10/10.Oh, okay, I’ll do it properly. Kiki’s Delivery Service tells the story of a young witch in training who, on her 13th birthday, sets off from her quiet little village to gain new experiences in the wider world. But she soon finds that life in the big city … Continued