‘What is rakugo? The lone storyteller sits on stage. Using only a paper fan and a small cloth as props, and without standing up from the seiza sitting position, the rakugo artist depicts a long and complicated comical story. The story always involves the dialogue of two or more characters, the difference between the characters depicted only through change in pitch, tone, and a slight turn of the head.’ (Wikipedia)

A young man, just released from serving time in prison, goes straight to the yose, a theatre where the traditional story-telling, rakugo, is being performed by Yakumo Yurakutei VIII, a  master story-teller. With nowhere to go, he begs the master to take him on as his apprentice. And to everyone’s astonishment, Yakumo agrees, giving him the name Yotaro (foolish man). He’s never taken an apprentice before but something about Yotaro’s puppy-dog eyes and irrepressible enthusiasm seems to have won him over. Is the stern master performer going soft as he gets older? It’s not going to be easy for Yotaro as he finds himself living in the same household with resentful Konatsu, Yakumo’s adopted daughter (and only child of Yakumo’s fellow rakugo artist, Sukeroku) and the master’s faithful manservant, Matsuda.

Cinema and TV have stolen the audiences from live theatre and rakugo has fallen from favour with the public, with few faithful adherents. Yakumo’s personal credo has been that when he dies, rakugo will die with him. But Yotaro, young, brash and passionate, is determined not to let that happen. Back when he was in prison, watching the master’s performance of the chilling tale ‘The God of Death’ was a life-changing inspiration for him. But he has a lot to learn. Konatsu, constantly seething with resentment that she cannot become a rakugo artist like her beloved dead father because she’s a woman, reluctantly shares some of Sukeroku’s material with Yotaro. These are a revelation; Yakumo may be the master of the formal classical tradition but Sukeroku had the common touch and was developing his very own personal version of the art. Inspired, Yotaro yearns to do the same – but only ends up falling out of favour with his austere master.

But what has made Yakumo into the revered but cold-natured man he is today? In Volume 2 he tells Yotaro and Konatsu tales of his childhood and apprenticeship. The story goes back to the pre-war years and we get to see his fellow apprentice and friend Sukeroku, such an instinctive and popular performer, through Yakumo’s eyes. We also get to meet Miyokichi, the beautiful yet artful young woman the young performers’ master brings back with him after the war has ended. And Miyokichi seems to have taken a liking to Yakumo… 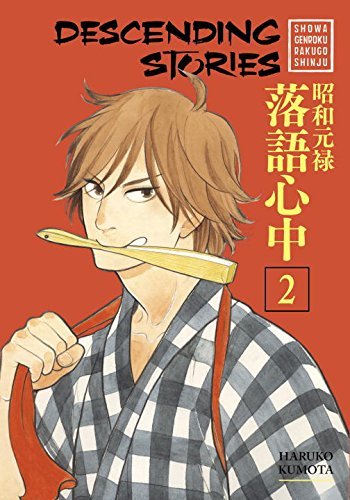 A distinct problem – and advantage – for many readers coming to this much anticipated release in English from Kodansha is that we’ve already watched the superb anime TV series. And in an anime about a performing art, you can bring that art to life in real time, with skilled voice actors, music and animation – in colour! However, I’m not going to complain about the way that rakugo is depicted in black and white because mangaka Haruko Kumota is very skilled at portraying facial expressions and bringing her characters to life (the full-length chapter splash pages are especially handsome, evoking traditional woodblock art). She recreates the atmosphere of a live performance with economy and story-telling skill of her own. Even though there’s a reading list about rakugo for those interested, the mangaka wears her scholarship lightly so the reader is never bogged down in unnecessary historical detail. And the manga itself (especially when told by Yakumo himself) moves surprisingly swiftly; it’s a real page-turner. Not to mention all the delightful little extras that accompany a manga: an informative bonus chapter on the yose in Volume 1 and a relationships chart in Volume 2, with a fun chibi bonus comic at the end!

Is Yakumo a reliable narrator of his own life story? It’s too early to tell. We already know that Sukeroku died in tragic circumstances and Konatsu accuses Yakumo of causing her father’s death. Did he really kill his friend and rival? This story spans – more or less – the Shōwa period, from 1926 to 1989, the reign of Emperor Hirohito, a time that saw great changes in Japan. But one surprising element is the fact that World War II passes surprisingly swiftly in Yakumo’s narrative; when rakugo is banned, he is evacuated with his master’s wife from Tokyo to the country. ‘But change came without warning. I heard that the Emperor had spoken on the radio. And the war was over just like that.’

Haruko Kumota is a versatile and distinctive artist; her BL stories range from the skittish and delightful Itoshe no Nekkoke (briefly e-published in English by JManga) to the salty Shinjuku Lucky Hole (IDP Boys Love Hana Collection) set in the porn industry. Then – not BL! – there’s her ongoing manga version of Fune wo Ame, based on the prize-winning novel by Shiura Mion about the compilation of a new dictionary and not yet available in translation. Descending Tales shows her at her best: creating complex, intriguing characters like Konatsu and Yakumo whose tense not-quite father-daughter relationship is transformed by the arrival of the irrepressible Yotaro. No one is quite what they seem; everyone is hiding agendas and heartaches of their own and even good-natured Yotaro is pursued by his yakuza past. This is a tantalizingly seductive mix and the reader is soon drawn in, eager to find out what really happened to Sukeroku, and fascinated by the twisted web of relationships backstage that is gradually being laid bare.

Another welcome feature of the Kodansha editions are the helpful Translator’s Notes at the back. This is a real plus, as is the list of rakugo stories in each volume and the suggestions for further reading. They don’t spoil your enjoyment of the story by going into unnecessary detail but provide just enough background and explanation to explain terms that might otherwise baffle. So you can learn what the ‘Flower Willow world’ is or why the honorific ‘Ojosan’ is used in a certain context and what it implies. Matt Alt’s translation flows well and is enhanced by Andrew Copeland’s lettering which uses  different styles to contrast the difference between everyday conversations and rakugo performances.

Descending Stories brings the world of a unique performance art and the complicated relationships of its performers to life through mangaka Haruko Kumota’s distinctive art and engrossing story-telling. 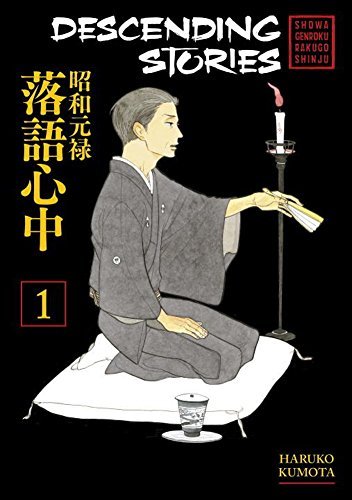