‘No matter how tough things got, a hero would never come to save me. That’s what I thought.’

Masahiro Setagawa is fifteen, dyes his hair blonde and is forced to act as the underling/obedient dog of a gang of delinquents after school. His mother is in the entertainment industry (in that she entertains clients) so he’s often home alone, looking after himself. But, contrary to appearances, he’s a good kid at heart who loves to cook for his friends. And even though he denies the existence of heroes (as no one so far in his life has come to rescue him) cue the arrival of the terrifying ‘Bear Killer’ a local vigilante who scares off the delinquents. Setagawa’s life is about to change in more ways than he could imagine.

The Bear Killer turns out to be Kousuke Ohshiba, older brother of Setagawa’s childhood friend, Kensuke, who has just been appointed as his homeroom teacher at the high school they attend. Now that Setagawa has encountered a real-life hero, he’s confused. He begins to realize that he has feelings for Kousuke that go deeper than hero-worship…but how is that going to work out? And when his old gang track him down, the last thing he wants is to get the Ohshiba brothers involved in what he sees as his problem. There’s only one alternative – even if it means he has to give up on the one thing that really matters to him, in order to protect the people he cares for.

Let’s get this out of the way: the main ‘will they, won’t they?’ couple are teacher and student BUT (and this, I guess, is where the mangaka and her editor make it ‘all right’) that student was best buddies with teacher’s younger brother when they were small and so older brother is not so much a teacher but more a family friend…  It’s all fantasy, really, isn’t it – a wish-fulfilment romance disguised as a slice-of-life romcom that turns up again and again in shojo, yuri and yaoi/BL? And even though you’re rooting for Setty (Setagawa) to be rescued from his life of drudgery, it’s the knockabout daily life of his group of friends that sets the main tone of Memeco Arii’s likable manga. The boys joke around, enjoy sharing food, care for their pets and moan about schoolwork. Against this everyday backdrop, not one but two relationships are developing: the ‘long-term schoolmates start dating’ set-up with energetic Kensuke and stand-offish Asaya Hasekura (the central characters in the mangaka’s earlier BL Hitorijime Boyfriend) and the twelve-year age gap romance between Setagawa and his knight in shining armour, Kousuke.

Memeco Arii’s graphic style is often sketchy and cartoonish but very distinctively her own; her light touch ideally suits the tone of the story she’s chosen to tell and the way she’s telling it. And when things get serious, she’s perfectly capable of showing the main characters as the beautiful bishonen the reader suspected all along that they really are. There’s nothing really explicit in the art beyond kissing (hence the 16+ rating) – although even though the story neatly skips to the morning after the night before, you’re left in no doubt as to what’s transpired. So if this concept doesn’t appeal, this definitely isn’t the manga for you.

This is the first of Kodansha Comics’ new venture into BL print editions and it’s been given a very attractive large format with two colour pages at the front, plenty of bonus material and excellent Translator’s Notes at the back (mostly about the food – although some of the more risqué implications of seemingly mundane statements are also explained ). The mangaka’s amusing and self-deprecating ‘Exciting Afterword’ is also included. Translator Anne Lee captures the informal banter of the young men really convincingly which helps to bring the lively cast to life on the page.

Hitorijime My Hero is a welcome addition to the (slowly growing) range of BL manga available in English translation. Its laid-back tone of voice and distinctive graphic style make it a fun read – but there are some dramatic and emotional moments as well. It’s only the first of eight volumes in an ongoing series and if you’ve watched the (excellent) anime series on HIDIVE, you’ll be aware that there are dark clouds massing on the horizon. Setty is a really endearing main character and you’ll be rooting for him as the problems start to build up.

Find out more about Hitorijime My Hero at Kodansha Comics here. 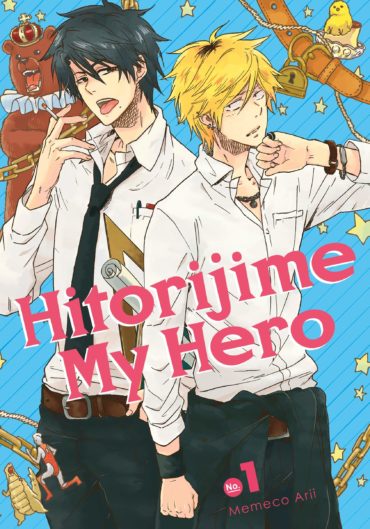