“Isn’t it romantic? A kiss is the key.”  School President Kagami

Middle school student Hakka Sasakura arrives home to find the door to the family apartment unlocked. Waiting inside is a human-sized cow mascot (or kigurumi). What’s a girl to do but try to yank the head off and expose the face of the stalker inside the costume? Except, as the cow mascot tells her (it communicates by holding up messages on cards) ‘It won’t come off’. Luckily, Hakka’s mother appears and reassures her daughter that the kigurumi is part of a special experiment to be conducted by the school. “My name is Ginger,” it tells Hakka as the whole family welcome it into their home.

Next day, Hakka discovers that two fellow students, Nobara Miyamori and Satsuki Nasu, have also acquired kigurumi: Fennel and Basilico. All six are summoned to a special meeting with handsome school president, Chigaya Kagami (Hakka has a crush on him, so she’ll do anything he asks). It seems that the three students have been selected to be Guardians and, with their kigurumi, must fight off invaders from another world: the Puppet Guild. These sinister aliens are out to steal the hearts of unsuspecting humans and make them their puppets (or shells). The kigurumi are to work with the Guardians but must ‘repart’ (transform into their true forms) and that transformation can only be triggered by… a kiss. Imagine Hakka’s surprise when – after a shy smooch – Ginger transforms into a black-haired, black-suited young man! And she made him take a bath with her the night before, totally unsuspecting…

It’s not long before one of the aliens, Lavender, steals the heart of a girl at the school. Hakka, outraged, fights back valiantly to defend her schoolmate – but learns that she will have only one chance to return the stolen heart. The stakes have been raised – but has Hakka (helped by Ginger) the courage and a heart that’s strong and pure enough to win the day and save a life?

‘A young girl gains magical powers and must work with handsome but quirky bishounen companions to do good and protect her friends’ is a shoujo manga theme less in evidence of late but popular only a few years ago (Shugo Chara!, Sugar Sugar Rune, Sakura Cardcaptor). In fact, this series debuted in Kodansha shoujo magazine Nakayoshi, also home to these titles and, it could be argued, owes more than a little to Moyoco Anno’s feminist fairy tale Sugar Sugar Rune (stealing hearts in crystal form is definitely a little nod in that direction) even though the series is compared to Sailor Moon in the promotional material.

Wish-fulfilment stories – in which a routinely dull school life is transformed by the appearance of magical or extra-terrestrial companions and an essential role to play in saving the world – are still seductively attractive. Coming after Lily Hoshino’s celebrated character designs for game-changing anime TV series Mawaru Penguindrum (2011) and her own manga Otome Yokai Zakuro which was made into an anime series, there must have been hopes that it would, too, be given the same treatment. It certainly has all the right components: plucky heroine; bizarre/cute mascots; mischievous humour laced with danger; handsome heroes and a little gentle BL teasing to add a sprinkling of spice, all conveyed through Lily Hoshino’s attractive character designs and skilful, streamlined storytelling. The publishers remind us that this is, in fact the first of Hoshino-sensei’s manga to be translated into English that is not BL; Mr. Flower Groom, Mr. Flower Bride and Love Quest are still available from Yen Press. But even though this looks at face value like a typical shoujo magical girl fantasy, everything is definitely not what it seems and the astute reader will soon begin to wonder exactly who is telling the truth and what’s really going on. The clues are there…!

Kodansha gives us a handsome trade paperback edition with a colour plate and an excellent translation (as always!) from Alethea and Athena Nibley, as well as two pages of helpful translators’ notes at the back.The second volume which is due out in October and I, for one, can’t wait. 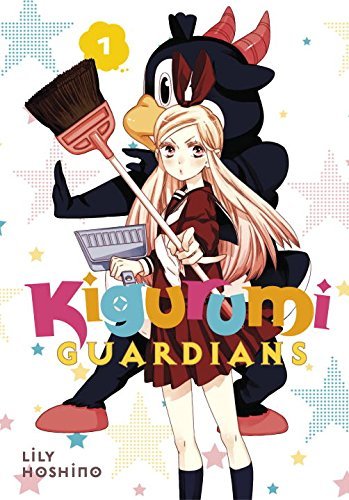 Wish Upon the Pleiades Review

Subaru is a junior high girl who loves the stars. However, when she opens the door to the observatory to watch a meteor shower, she gets more than she’d bargained for. Instead of the usual room, she is greeted by a lavish garden and a mysterious long-haired boy. The garden soon disappears, and all that … Continued

Prétear is certainly a strange series, and one that I’ve come to really enjoy. Despite it’s appearance as a sappy ‘magical girl’ show, Prétear continues to surprise me with both it’s deep, conflicted characters and a rather mature story line; taking as many cues from Evangelion as it does Sailor Moon. Volume 3 (episodes 8-10) … Continued

Make A Wish – If You Dare! ‘It’s easy,’ proclaims the blurb. ‘Just send a text to a certain address and a dark angel will appear and grant you a wish – but only one! You can wish for you crush to fall in love with you, for revenge against those who have wronged you, or … Continued