Contrary to the picture my work often paints of me, I actually have a real soft spot for shojo series. With that in mind I took on one of the latest shojo titles to be released by Kodansha Comics, Kiss Me at the Stroke of Midnight. Will this first volume set my heart aflutter?

The story follows Hinana Hanazawa, a honors student who is well respected by her classmates, always helps out at home, and runs her life on a tight schedule. In Hinana’s world there is no time for things like dating and romance – or at least that’s how it seems! Deep down and unbeknownst to her friends and family, our protagonist has just one wish: to have a fairy-tale romance like in Cinderella. When a handsome celebrity named Kaede Ayase comes to her school to shoot a movie, could Hinana’s wish be about to come true?

Due to Hinana being on the school’s student council, she and some of her friends are asked to work as extras in the movie. This results in Hinana coming face-to-face with Kaede, whom she sees as a young prince charming. However, what she soon finds is that despite Kaede’s perfect outer appearance, he actually has a terrible personality. He’s a panty-obsessed weirdo with no awareness of why a schoolgirl would be put off by his hobby.

On a day off during filming, Hinana goes into town to see a romance movie (something that she loves doing but never talks about) and bumps into Kaede in disguise. After being spotted by some fans of his, Kaede runs off and drags Hinana along with him – but doing so results in Hinana breaking the heel of her shoe. Kaede decides to give Hinana his shoes and takes hers to be fixed. From then on the two seem bound by fate and repeatedly run into each other (although there are plenty of mishaps along the way!) and a young love begins to blossom.

Although the synopsis on the back of this volume indicates that Kiss Me at the Stroke of Midnight is a Cinderella story, the manga doesn’t actually have that much in common. The name of the series, the shoe incident that I mentioned above and Hinana’s love for the classic fairytale are the biggest nods to Cinderella. I assume Kaede’s personality being less than princely is an attempt to subvert the standard love-story trope we know, but not much else in Kiss Me at the Stroke of Midnight matches up (yet).

The problem is that Hinana and Kaede aren’t very interesting characters. Within this volume Hinana doesn’t seem to have much personality beyond wishing for her dream romance. Although she clearly has long-term childhood friends, they aren’t fleshed out enough to complement Hinana as a person. Kaede on the other hand is, for me, instantly off-putting due to his love for girls’ underwear. It’s funny once or twice as a joke but as an ongoing part of his character, I find it boring. This is a shame as there are obviously some secrets to be revealed about Kaede’s past, such as why he went into acting despite being part of a successful boy-band beforehand, but the manga doesn’t do enough to outweigh his annoying personality.

The other pitfall the series falls into for me is the age gap between Hinana and Kaede. Although the manga never states what grade Hihana is in, the character designs and school uniforms lead me to believe that she’s in high school. Then we have Kaede, who is a 24-year-old. I’m not someone who usually minds age gaps but this one rubs me the wrong way (perhaps not helped by Kaede’s personality), so the series is going to have to work quite hard to demonstrate why this relationship is appropriate if the two ever get together. It’s unfortunately a real problem for me in wanting to continue this manga and I wish Kaede had been just a little younger.

Kiss Me at the Stroke of Midnight’s mangaka is Rin Mikimoto, who’s also created two previous long-running shojo series: Kyou no Kira-kun (which has not currently been licensed in English), and Love’s Reach, which Kodansha Comics started publishing in English digitally in July 2017. I’ve not read any of Mikimoto’s works before now but overall the artwork for Kiss Me at the Stroke of Midnight is very smooth. Characters and backgrounds are well detailed and it’s nice to see a pair of protagonists with a bit of a western feel to their designs. Kaede for example looks as if he’d be a popular movie actor in the west with his fluffy, curled hair. That said, Mikimoto does have a tendency to chibi-fy her characters and give them big bobble-heads for more comedic scenes. It’s a style I’m not personally a fan of but I think it works in the context of the series.

This release is brought to the UK thanks to Kodansha Comics, who have done a really nice job on the release. The book opens with four colour pages and there are some in-depth translation notes in the back of the volume. The translation, handled by Melissa Goldberg, overall reads well and there isn’t anything to complain about.

Overall the problems I have with Kiss Me at the Stroke of Midnight are not problems everyone is going to have. If you enjoy romantic comedies and like the sound of the characters then you’ll probably get on with the manga a lot more than me. The series wants to be a Cinderella story but unfortunately the cringeworthy comedy and huge age gap between Hinana and Kaede leave a great deal to be desired. This is an average shojo tale at best. 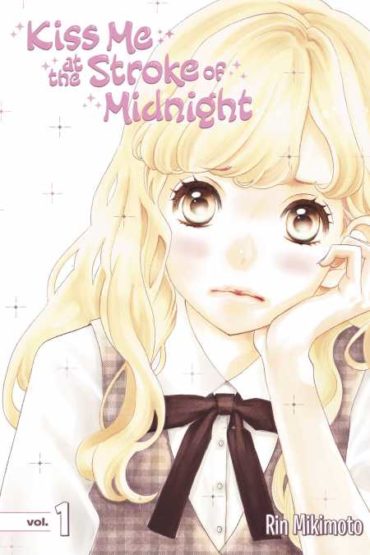 Title
Kiss Me at the Stroke of Midnight Volume 1