If you were to ask me how many shonen manga I’ve read in the last five years, I’d be here all day. The truth is that I’m a huge fan of the genre and always looking for my next shonen fix. In my latest attempt to quench my thirst I’ve chosen to review Fire Force from Soul Eater’s mangaka, Atsushi Ohkubo. With such a huge series to his name, just how does Fire Force match up?

The story is set in the year 198 of the Solar Era in Tokyo. Presently there is a mysterious epidemic that’s causing people to suddenly burst into flames and die. However, instead of staying dead after combusting, these victims’ bodies become flaming monsters who cause havoc to everything around them. These monsters are known as “Infernals” and they’re fought by the Fire Force, who aim to both cure the epidemic and stop Infernals before they can cause major harm. Our protagonist, Shinra Kusakabe, has just joined Special Fire Force Company 8. He’s known as the “Devil’s Footprints” due to his ability to shoot fire from his feet, which allows him to move very quickly. Will this power prove useful in fighting the Infernals?

The manga explains that there are three generations of people affected by the spontaneous combustion. The first generation are those who lose their minds, die, and become Infernals; while the second are those who have the power to control flames at will. Finally, the third generation are people like Shinra – who have complete control of and can create their own flames at will. It has to be said that earlier on the mangaka doesn’t do a particularly good job at explaining the difference between the second and third generations. It wasn’t until closer to the end that I understood the differences, which isn’t great when all of this is first brought up in the first chapter!

Moving away from technical aspects and back to the plot: I found that Fire Force isn’t overly interesting. Admittedly, some of this is because firefighters are one of the last things I’d pick to focus on for a shonen series but it’s also due to its main character. Shinra is a stereotypical protagonist with a tragic backstory: his family died while he was a child and now all he wishes for is to become a hero. He also has an annoying quirk in which he dons an evil-looking grin when he’s nervous. I didn’t find him that engaging as a character, nor found myself rooting for him as he fought the Infernals. If anything, he was just kind-of there.

In fact, none of the cast among the Fire Force Shinra works with have much personality; they’re all rather bland. The only one I felt any attachment to whatsoever was Arthur Boyle, who was introduced toward the end of the book. He’s Shinra’s rival from their academy days and he’s a fellow third generation (he uses his flames to create himself a sword) with a love for knights. Arthur can also be a two-dimensional character when push comes to shove but at the very least his interactions with Shinra are fun.

While I’ve mentioned above that the characters are quite bland, the story unfortunately also suffers from the same problem. I wanted to know what the cause behind this epidemic was but sadly it’s barely explained. For example, we know that there are three types of people it affects in different ways but does that mean if you’re a second or third generation you can’t become an Infernal? I also originally thought that the generations were split by age but later in the book we meet a girl who’s lost both her of parents to spontaneous combustion and worries that she’ll be next. The fact the plot doesn’t properly explain the whole thing makes me a lot less interested because it just seems flimsy.

I’ve not read more than the first volume of Atsushi Ohkubo’s Soul Eater series (I’m a fan of its anime instead) but readers who are familiar with it will be happy to hear that Fire Force shares a very similar art style. Overall the characters and backgrounds are detailed and Ohkubo manages to project the idea of people and places being on fire very well. That said, I do think his work for Fire Force isn’t as strong as usual for the action scenes. The biggest battle for the Fire Force team is hampered by flashbacks for Shinra. It wastes a lot of valuable time that could have been better used on the fight itself rather than breaking it up, and I didn’t find it held together well. It was sometimes difficult to work out where everyone was and that’s not something I expect from a mangaka with so much experience.

Fire Force has been released in English thanks to Kodansha Comics. The translation has been handled by Alethea & Athena Nibley and reads well, and there are a number of translation notes at the back of the book as per usual for Kodansha releases.

Overall I found Fire Force a bland, unengaging and often boring story. The synopsis led me to believe I was in for a much more interesting series than what we have, with the final straw being that the epidemic, the main plot point, was poorly explained. If you’re a fan of Ohkubo’s work or a die-hard shonen fan then perhaps it’s worth giving the first volume a chance, but honestly Fire Force is just unremarkable. There are simply far better shonen on the market right now. 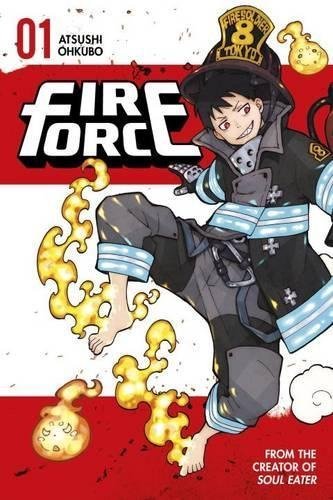