Months of speculation are over with a colossal reveal! A pop culture phenomenon is returning to the UK with the release of Attack On Titan Season Two, Sony Pictures Home Entertainment have announced today.

Attack On Titan Season Two will be released as a complete series collection on 26 February 2018. The season will be available as a Standard Edition DVD, a Standard Edition Blu-ray and a Collector’s Edition Combi-Pack that includes the following physical extras:

The on-disc extras for the release, are as follows:

The Standard Edition Blu-ray and DVD are also available to pre-order now. We’ll update with Collector’s Edition details as and when they come.

Eren Jaeger’s battle against the Titans rages on! After fighting the female Titan, he has no time to rest as a horde approaches Wall Rose. With his ferocious abilities and a new plan, Eren and his friends set out to face the Titans head-on. But as they prepare for war, they begin to unearth terrifying secrets. What are the Titans really, and where do they get their power? As they begin investigating the danger hidden within the walls, a colossal reveal shakes them to the core! More Titan shifters are identified, and worse yet, a new Abnormal appears – the horrifying Beast Titan! Does humanity stand a chance at survival with no one to trust and a new evil on the horizon?

Animated by WIT Studio (The Ancient Magus’ Bride), Attack On Titan :Season Two was originally broadcast in Japan earlier this year, with a third season announced to be following in July 2018. 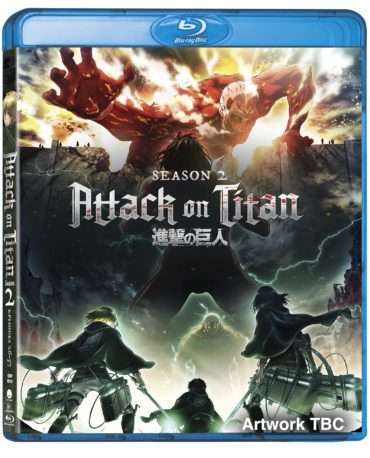