On his first day of attending junior high, Eren Jaeger encounters humanity’s biggest foe when he comes face-to-face with a behemoth known as a Titan … and it steals his lunch! From that day onward, he vows revenge against all the Titans for daring to steal his precious cheeseburger, planning to eliminate their kind once and for all. Alongside childhood friend Armin and adoptive sister Mikasa, Eren attends Attack Junior High, participating in classroom activities and joining the Wall Cleanup Club, bumping into many a familiar face along the way.

When you think of anime that have the potential to be spun off into comedy, the grim, dour and brutally violent Attack on Titan probably isn’t the first that comes to mind. However, through what I can only assume is by sheer force of popularity, we have Attack on Titan Junior High, a spin-off of the mega-hit franchise, based upon the manga by Saki Nakagawa. 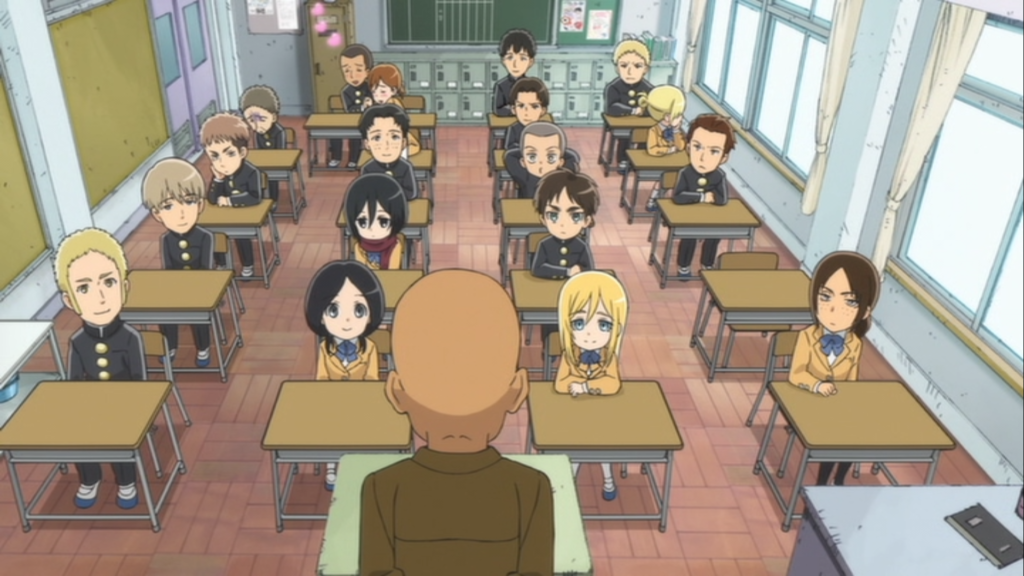 Although it may seem obvious to say the least, the biggest takeaway from watching Junior High is that it is definitely a show made for the fans. It may not be as impenetrable as some other comedy spin-offs of popular franchises, such as the Fate/Stay Night and Tsukihime-based Carnival Phantasm, but the majority of the gags here will require prior knowledge of at least the first season of Attack on Titan, with even some subtle nods to events beyond, as a lot of scenes are direct parodies lifted straight out of the original anime. Although aiming Junior High squarely at the die-hards may seem like the smartest idea on the surface, being so focused on delivering jokes for the fans ends up shooting itself in the foot, as the majority of the jokes are incredibly predictable if you’ve spent any amount of time around the Attack on Titan fandom, playing up the parts that you’d expect them to, to the point where I, or any other fan could have written it themselves. 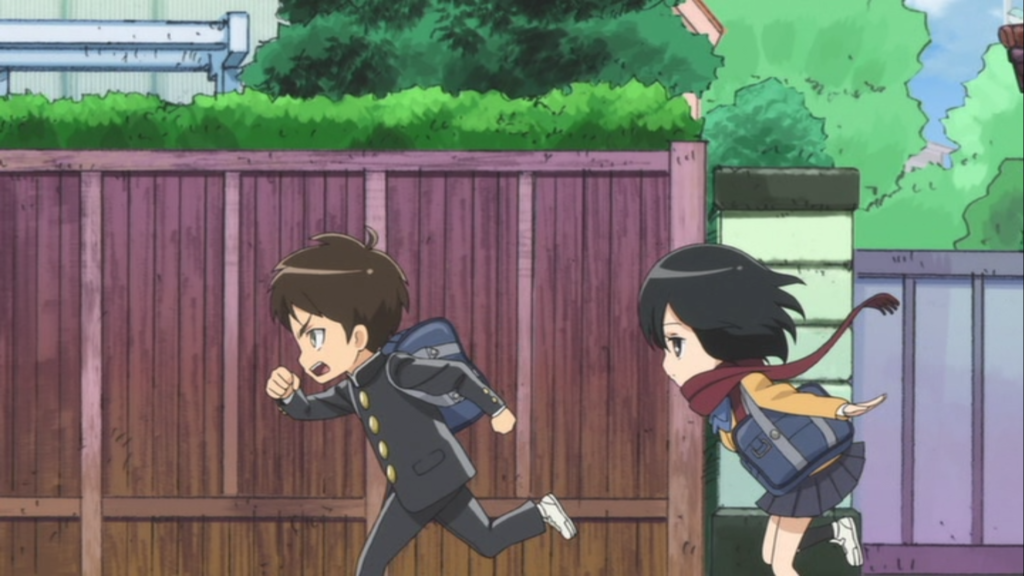 From Mikasa’s overprotectiveness of Eren, to Ymir wanting to marry Krista, to Sasha’s food obsession, to Levi being a clean freak, all of the incredibly obvious bases are covered and quickly run into the ground in most cases. I’m not saying that any of the jokes are really bad, per se, more that they’re just amusing, with the series very rarely making me laugh out loud. For the characters that lack any sort of trait from the original series to work off of for comedy, Junior High chooses to either almost totally brush them off, such as Erwin or Reiner, or just make things up, such as the bizarre decision to make Armin sensitive to the cold, or to make Connie an idiot. I’m not sure if it’s just my poor memory, or there’s something I’m not getting, but the jokes based around these two seem very random, and they’re not especially funny to boot. 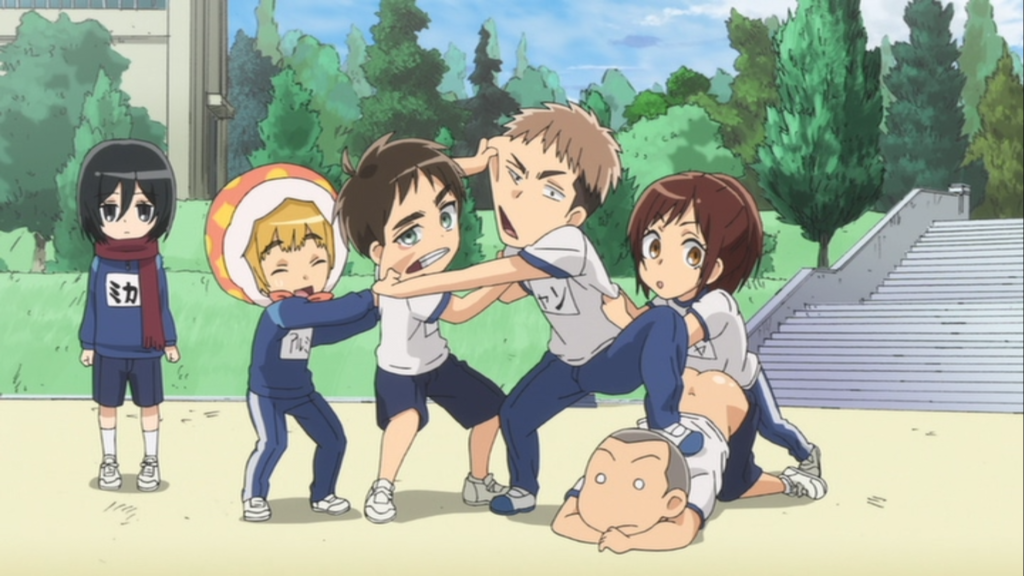 Despite the majority of the jokes being based around references to Attack on Titan, that’s not to say that Junior High isn’t totally bereft of other sorts of humour, and it’s in these moments that the show really shines, in my opinion. As well as a good dose of slapstick, which I found to be somewhat hit or miss, the best moments come when it takes the basic elements of Attack on Titan, and builds jokes around funny situations. My favourite example of this is in Episode 6, in which Jean finds a love letter in his shoe box, leading to a hilarious punchline at the end of the episode, which was funny mostly because it wasn’t a direct reference to something that you could easily predict. If there was a bigger focus on this type of humour, instead of having Eren say “I want to defeat the Titans” or Ymir say “I’m going to marry Krista” for the ten millionth time, Junior High would be far better off. 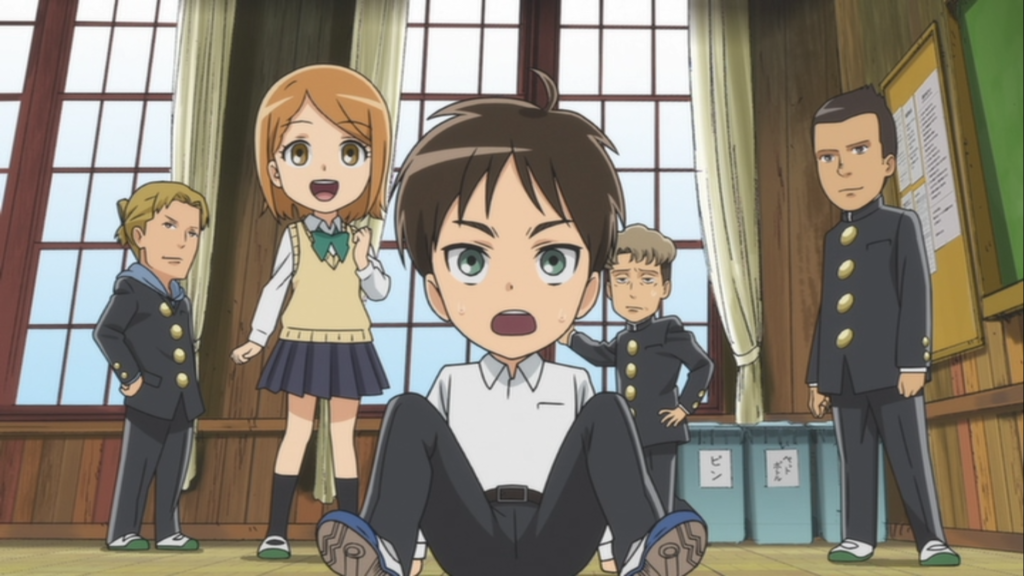 If you’re coming into Attack on Titan Junior High with the same quality expectations for the characters as the main show, it’s best to check them at the door, as this will certainly disappoint you otherwise. Everyone here is boiled down to their most basic form, reduced to only their most humorous and comically exploitable traits. Granted, this is a comedy, so I wasn’t expecting much, and I think the series works perfectly fine as it is. The one advantage that Junior High has is the relaxed setting that allows the audience to spend a bit more time with characters who are no longer in Attack on Titan. A lot of good cast members were bumped off along the way in Season One, so for fans, being able to see some of their favourites come back may be reason enough to check this spin-off out. 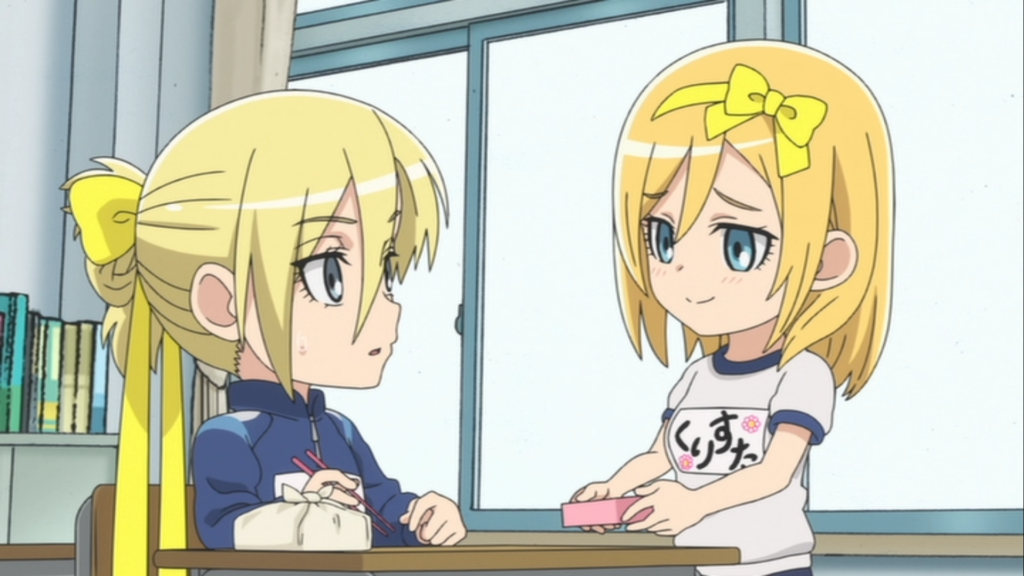 Unlike either of the main seasons, Attack on Titan Junior High is not produced by Wit Studio but instead their parent studio Production I.G, but given how different the style is, I don’t see this as a particularly big loss. As opposed to mimicking the style of the original, Junior High instead goes for a cartoony look that better matches the genre, and works very well. My only real gripe is with Yuuko Yahiro’s chibi-looking character designs. Whilst not outright awful, I can’t get past how big the heads are in comparison to their bodies. I know this is rather inherent to the chibi look, but slightly better proportioned designs would have looked better. 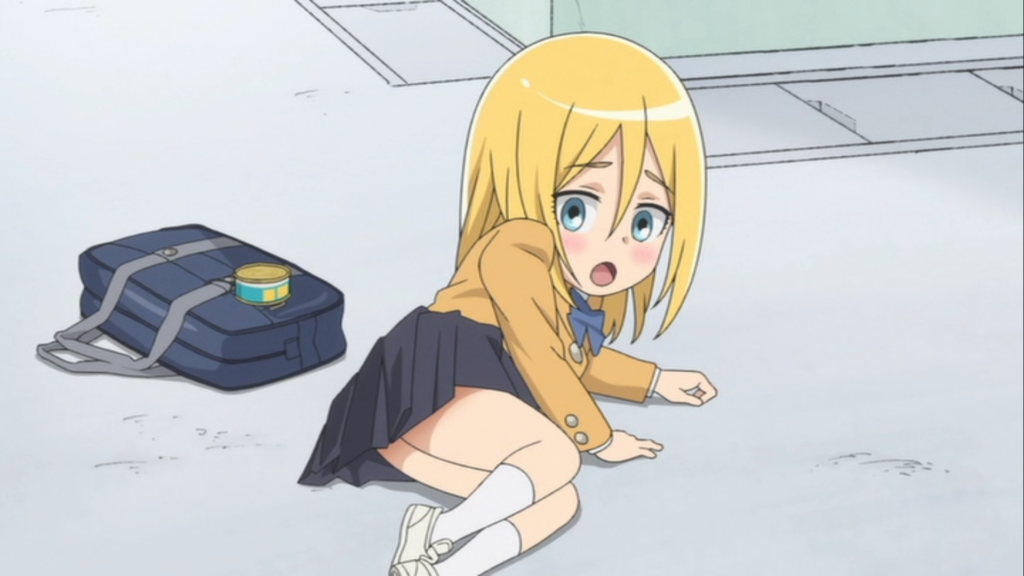 Audio options on Funimation UK’s release of Attack on Titan Junior High are sure to please both fans of the Japanese and English dub voice casts, with both getting the entirety of their casts back to reprise their roles from the main series. Whilst the Japanese side remains as stellar as always, the brief sample of the English audio that I tried didn’t leave me with an excellent impression, although that could be partly down to my attachment to the Japanese cast at this point. Music for Junior High comes courtesy of Asami Tachibana, and whilst decent, her contributions are vastly overshadowed by the tracks pulled from Hiroyuki Sawano’s score for the original show, which you’ll hear quite frequently. Linked Horizon, the band behind Attack on Titan’s now iconic opening, return to provide the opening track for Junior High, with ‘Seishun wa Hanabi no You ni’, a song that seems to be part tribute to the the original opening, part original song, and it does work when accompanied with the visuals that also parody the famous OP, but it isn’t anywhere near as memorable. 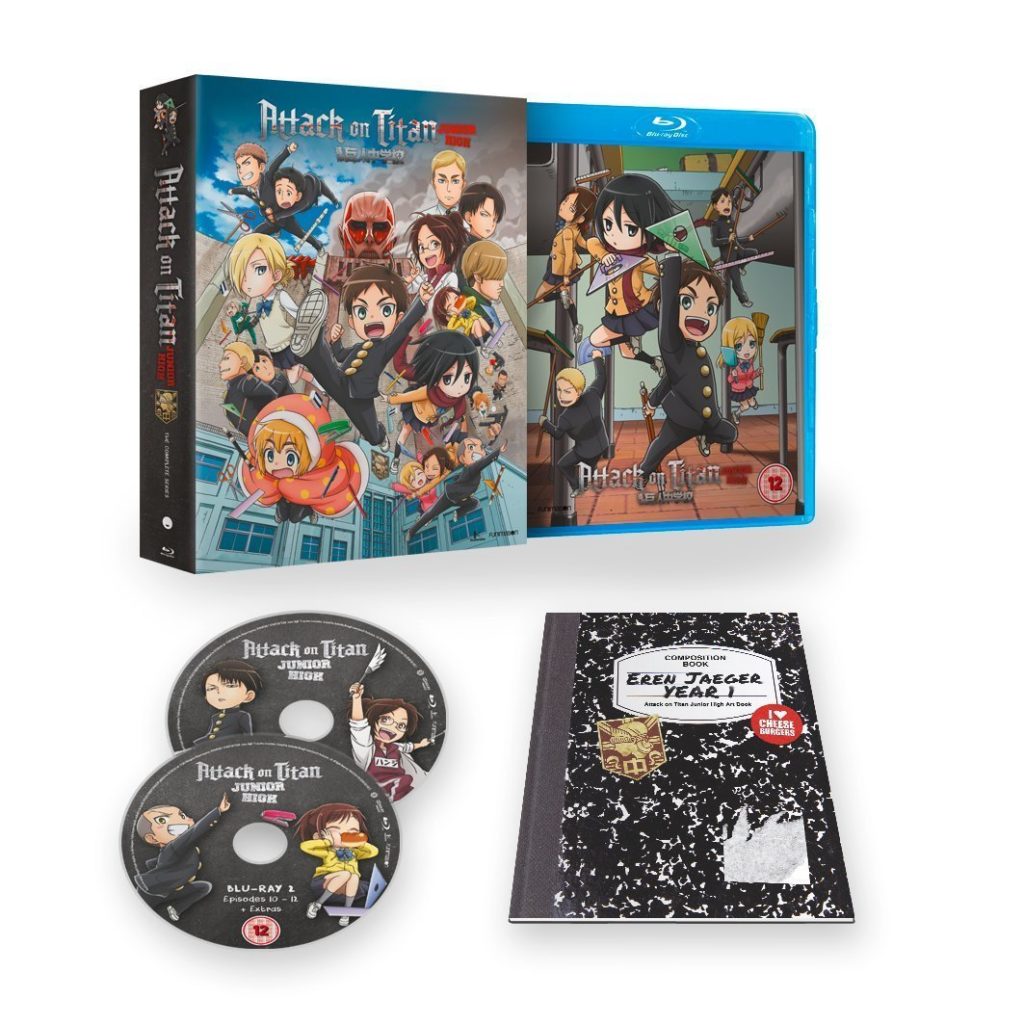 Funimation UK’s Collector’s Edition Blu-ray includes all 12 episodes, as well as a booklet, whilst on disc special features include a clean opening, closing, trailers, commercials, and a video commentary track.

Whilst the reference gags will surely get a few laughs out of the Attack on Titan diehards, the majority of the humour being predictable and the lack of any memorable or laugh-out-loud moments make Attack on Titan Junior High a hard sell to anyone but the most devout of fans. 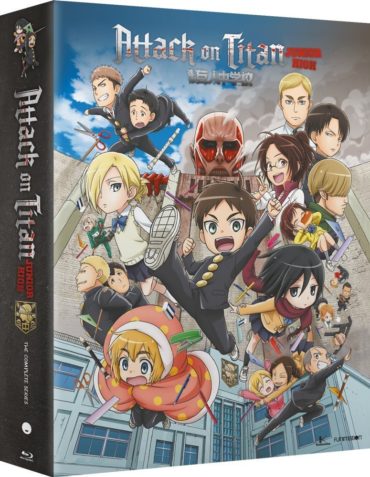