If I mention the name Hiromu Arakawa, then your first thought is probably her successful shonen manga, Fullmetal Alchemist. However, back in the summer of 2013, another of the mangaka’s works was turned into anime: Silver Spoon. Since then I’ve been eagerly awaiting an English release of the original Silver Spoon manga and now, thanks to Yen Press, it’s finally here.

Silver Spoon tells the story of Yuugo Hachiken, who enrolls at Ooezo Agricultural High School (despite having no interest in agriculture) looking for a change of pace from living a city life. He enters the school thinking that someone as smart as himself will be able to ace every test compared to a bunch of farmers, but little does Hachiken know he’s in for an experience that will change his life forever.

Hachiken has never in his life been on a farm or interacted with the livestock associated with such a place, so it’s a real shock when he discovers that students at Ooezo are expected to help out with the on-site animals. This involves waking up at 5 a.m. while also dealing with a whole day of school afterwards! As our protagonist muddles through his new life, he also discovers how rewarding working with animals can be – as well as how cruel life can sometimes be for animals and the people with a career in farming.

Reading Silver Spoon is fascinating for me. I spent almost all of my childhood surrounded by animals (although my family didn’t run a farm, we weren’t that far off it!), so I know firsthand how difficult it can be taking care of livestock and pets in general. The flip side is that I also know how rewarding it can be, so watching Hachiken discover this for himself is a true joy.

As Hachiken spends more time at the school he realises that while the students of farming families don’t have book smarts, they’re all knowledgeable in a way that Hachiken isn’t, due to their upbringings and experiences. For example, everyone except Hachiken knows not to chase after a loose calf because it’ll come to you easily if you have a milk pail, but Hachiken, not having this understanding, tries to grab hold of one and, not surprisingly, the calf makes a break for freedom. Later in the book we’re introduced to some piglets who are being raised for slaughter and while everyone else knows not to get attached, Hachiken ends up naming one.

It’s the realistic approaches to situations like these that really make Silver Spoon special. Mangaka Hiromu Arakawa actually grew up on a dairy farm and her upbringing and life experiences shine through in this work, helped in leaps and bounds by her quirky sense of humour.

Speaking of Arakawa, her artwork for this volume is wonderful. Backgrounds are well detailed, characters and animals are nicely drawn and, perhaps most importantly for this kind of series, the animals look realistic rather than overly cutesy. The only minor complaint is that some character designs are very similar to those we’ve seen in Fullmetal Alchemist and other works of Arakawa’s. If you’re a fan of the mangaka’s work then this reuse might bother you a bit, but I personally don’t mind because her designs are fun and befitting of the setting.

This release comes to the UK thanks to Yen Press and is presented in a larger style book (similar to the Viz Media releases for Tokyo Ghoul), which really helps bring out the artwork. The only real shame is that there are no colour pages to open, which, judging by some coloured panels on the back of the book, do exist. Beyond that observation, the volume is well presented and includes some insightful translation notes in the back. The translation on the whole has been handled by Amanda Haley and reads well.

Overall, Silver Spoon is an insightful coming-of-age story about living a rural lifestyle. As Hachiken learns more about farming, so too will we, and along the way perhaps our protagonist will find himself a place in the world. Thoughtful, funny, and emotional to boot, Silver Spoon has a lot going for it and anyone even remotely interested in a new slice-of-life series should have this in their collection. 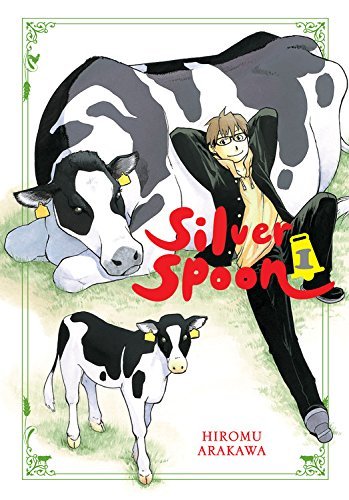 Fullmetal Alchemist: The Complete Four-Panel Comics deserves a place in every Fullmetal Alchemist fan’s collection. Containing hidden gems that are being released outside of Japan for the first time, this release is a treasure trove of content.