At thirty, office worker Satoko Tawada is feeling jaded and disappointed with her life. After a failed relationship, she’s still working for her ex, Shiikawa (they first met at college) at a firm dealing in sporting goods – but hasn’t found the energy to move on. Once a keen Futsal player, her attention is caught by a young long-haired girl she often sees playing with a football as she walks home through the park from work. She gets talking to the girl, demonstrating a few handy technique tips, and discovers that ‘she’ is in fact a ‘he’, Mashuu Hayami, a latchkey child of twelve years.

Concerned that Mashuu is so often out late alone, she begins to take an interest in his life, even hiring a car so she can drive him to a scrimmage match that his father has refused to take him to. And at work, Shiikawa notices a difference in her, even asking if she has a boyfriend ‘or something?’.

I am not a fan of shota. If Hitomi Takano had not raised the subject of the genre herself in her Author’s Notes, I would not automatically have associated it with the first volume of this seinen manga. Yes, seinen, not josei; to my surprise, I find this series is published in seinen magazine Gekkan Action. We’ve seen relatively little shotacon translated into English – and what becomes clear on reading the Author’s Notes at the end of this first volume is that there are many interpretations and sub-genres within the Japanese publishing world, so it’s possible, I guess, that we tend to see it only in terms of Super Lovers (to which the default fan reaction tends to be mostly ‘Eeuw’, judging by the comments on ANN when the anime version aired).

So what is My Boy? If this story of an unusual friendship between two lonely individuals evolves into anything inappropriate (she’s 30, he’s 12) then I probably won’t want to continue this series. But there’s no hint at all of anything inappropriate here. We follow the disappointing daily life of Satoko Tawada, a professional woman thirty years old, who has somehow or other ended up working for her ex, Shiikawa. There are hints planted as to why the relationship didn’t work out but also hints that Shiikawa still has feelings for her – but he certainly has a strange and insensitive way of showing them.

And then there’s Mashuu. Out on his own at all hours, father a workaholic, mother who knows where. (Seriously, what is with all these absentee parents in the world of manga?)  However, Chapter 3 ‘Rabbits’ shows us Mashuu at school with his peer group, where his job is to care for the school’s rabbits. We get to see another side of him, partly through the eyes of Ogata, a quiet, retiring girl in his year.

When she’s alone, Satoko worries about the relationship; she avoids the mothers at the scrimmage match, not wishing to be assumed to be Mashuu’s mother, but the label of ‘nee-san’, older sister, feels equally wrong. But when she’s with Mashuu, all her worries seem to melt away. The theme of being indebted to someone and repaying a favour runs throughout these first chapters. Mashuu’s father apparently refuses to let another parent take him to the football match (scrimmage game) because then he’ll have to repay the debt – and won’t be able to.

Hitomi Takano is a relatively new mangaka (her other two published works are BL) but this series already runs to four volumes and is still ongoing. Her graphic style is expressive, graceful and attractive; she’s especially good at conveying a character’s thoughts through facial expressions (check out p. 142 when Mashuu eats sushi for the first time).The translation by Kumar Sivusabramanian for Vertical Comics reads smoothly (even if we Brits might question some of the ‘soccer’ vocabulary!).

An unconventional friendship develops between two lonely individuals. My Boy delivers – in its first volume – a sensitive and beautifully drawn story that will make readers think about the pressures of modern life on adults and children alike.

A free extract can be found at Vertical Comics here 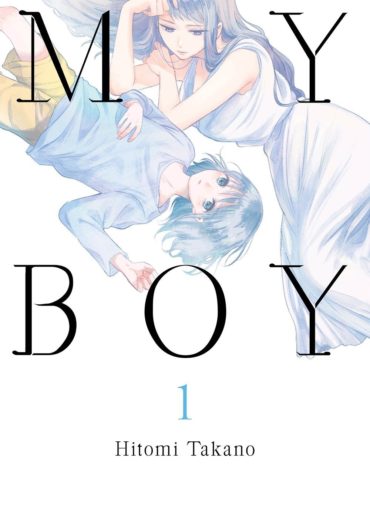