Overworked advertising executive, Kazuaki Sakurai (37) has become a regular visitor at the charming old boarding house belonging to art student Youichi Minagawa (19). Sakurai falls in love with the wild garden that surrounds the house but then, in spite of many awkward exchanges and misunderstandings, realized that he has also fallen for the young artist.

The arrival of Youichi’s fellow art student, self-confident and arrogant Kouiki Fujimoto, throws the household into confusion. Fujimoto is instantly suspicious of Sakurai’s motives and doesn’t hesitate to confront him. “At school all I do is look at him,” he tells Sakurai. “You’re the same way, aren’t you, Sakurai? It’s because you have that look in your eyes.” The arrival of Fujimoto causes Sakurai to do some serious soul-searching about his feelings for Youichi. Now he has a rival.

Sakurai is endearingly confused about his own feelings for Youichi. Youichi – for completely different reasons – is equally confused about his feelings. Sakurai, almost twice Youichi’s age, has had a string of failed relationships with women and has buried himself in his work, resulting in near burn-out. But his colleagues have noticed a change in his attitude; over the last months he’s regained his flair and enthusiasm. The only problem is that he might – the year before  – have indicated to senior management that he wouldn’t object to a move to the office in Kansai. Now he has every reason to want to stay, especially when Fujimoto cheerfully  blags his way into the boarding house as its newest lodger. However Sakurai has been asked by Youichi’s plain-speaking manager/housekeeper Yoshitomi (an old friend of his father’s) if he’d like a room there too. Unable to refuse, he moves in.

Shoko Hidaka is one of the most subtle mangaka in portraying the interactions between people; she has a wonderful knack of capturing the awkwardness between two individuals who are attracted to each other but, because of who they are, find it almost impossible to express how they feel. Sakurai is afraid of the strength of his own feelings – and yet he just can’t keep away. He agonizes over the age difference, asking his 28-year-old assistant if he would date a girl of 19. “I’m sure we wouldn’t know what to talk about…and be unable to continue conversations,” says Inoue. “Impossible.”

At last we get to learn more about Youichi. The young man bears a heavy weight of expectation on his shoulders: the death of his mother and gifted artist father in an accident years ago has left him not only an orphan but unconsciously  burdened with the expectations of his father’s circle of artists and friends that he will one day fill the chasm left by his death. Not only that; we also learn that as a child he overheard whispered rumours that his parents had committed suicide together. No wonder that he has grown up emotionally distant, wary of others and cold. Watching him begin to wake up to the existence of his feelings (Shoko Hidaka weaves the theme of the seeds planted by Sakurai as a metaphor throughout the story) is both painful and engaging.

There are plenty of BL manga around that leap from the ‘two people meet’ to ‘two people have hot sex’ in the blink of a few pages with no real character development to make it credible (yes, even if they turn out to have been childhood friends!). Does the Flower Blossom? is the complete opposite of this, making it a refreshing change from the current trend for hot sexy encounters as in Hashigo Sakurabi’s popular one-shot collections. I’m not knocking hot and sexy but, given a choice, I’d rather be reading a manga that draws the reader in via subtle characterization and develops a story in depth across several volumes. (The rating for this volume is still 16+ .) Shoko Hidaka has a good eye for the minutiae of everyday interactions and the underlying deeper emotional currents. She’s also surprisingly good at finding humour in the awkward exchanges between her two protagonists; there’s a wonderful scene where Youichi suddenly demands to see Sakurai’s apartment and Inoue’s casual remarks about being unable to continue conversations constantly haunt Sakurai as he makes coffee for them both and tries to find a topic that will stop the talk from drying up.

Shoko Hidaka’s graphic style is deceptively simple; she depicts the boarding house and its wild garden atmospherically, contrasting it with Sakurai’s sterile modern apartment (another effective visual metaphor). She is especially good at showing subtly changing emotions in close-up, the characters’ faces registering their reactions when words fail them or are no longer necessary (chapters 11 -12). This relationship is the very epitome of a slow burn but when the barriers begin to break down between the two, it’s all the more moving because it feels natural and earned.

Lea Hisatake’s translation is good in parts, but still suffers from some strangely stilted or mistranslated moments that throw you out of the narrative; for example, when Inoue comments that Sakurai looks tired and then goes on to say, “You’ve been sleeping so early lately, too” which doesn’t make a lot of sense. The French version renders this: “You’ve been going home early these days, too” which makes better sense. But as it’s been a long while for readers waiting for June to release Volume 2 (the date inside says February 2015) it seems churlish to complain. Bring on Volume 3, please, June! 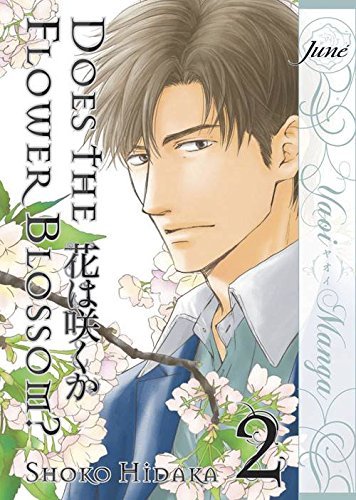 Title
Does the Flower Blossom?