At the Tohtsuki Culinary Academy, the most prestigious cooking school in all of Japan, it’s survival of the fittest, and if you can’t stand the heat, get out of the kitchen! With the brutal training camps and classes separating the wheat from the chaff, only the best of the best remain, cocky diner cook Yukihira Soma being amongst them. After the gruelling opening rounds of the Autumn Election, Soma soon finds himself facing the chemistry-obsessed granddaughter of the Academy’s director, Alice Nakiri, in the next stage of the competition. With other contenders including friends and rivals alike, not to mention the sinister dark horse Subaru Mimasaka, Soma will have to work harder than ever to earn his spot amongst the cooking elite. 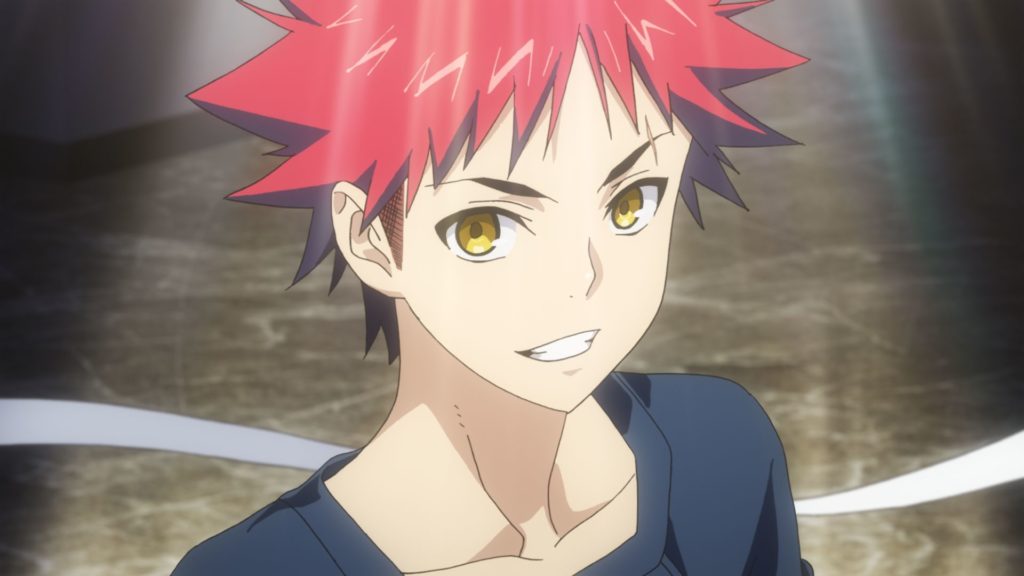 The first season of Food Wars provided a really new and interesting take on the tired old shonen genre, by making it all about cookery as opposed to fighting, and as such, I was quite the fan of it. However, as the series marches on to its second instalment, I couldn’t help but feel some of the magic is missing. 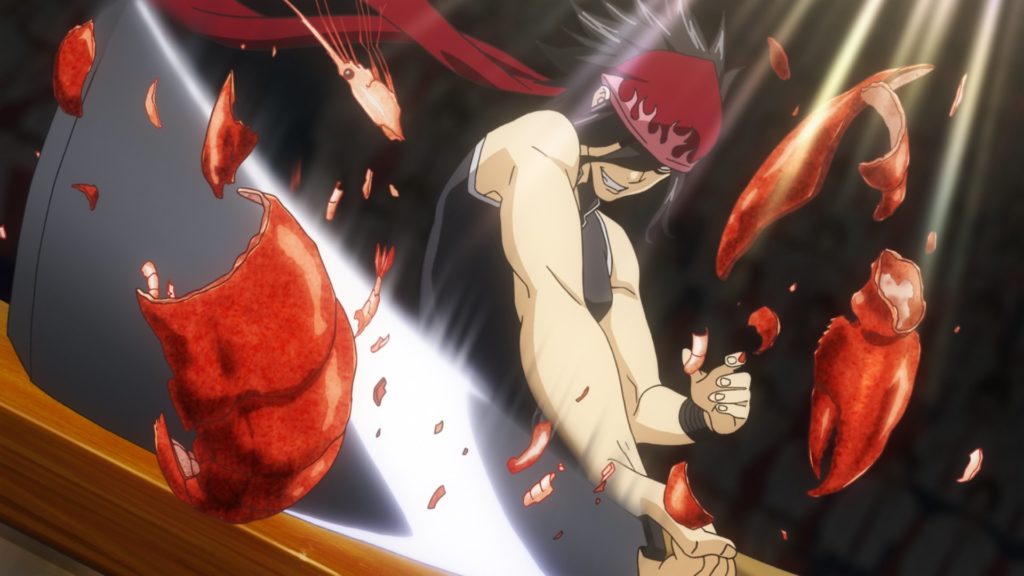 Throwing the audience straight back into the deep end, The Second Plate wastes no time getting straight to the heart of the action, resuming the Autumn Election arc right where it left off, in the quarter finals. Personally, I found this to be a bit jarring, having watched the first season a year ago, and not quite remembering what was happening, but that’s the danger of adapting on-going manga. The initial episode gives us our very first cooking contest as we see Soma pitted against Alice, and it is in this episode where the seeds of the underlying flaw of Second Plate are sown. This is a competition arc, and as such, there is nothing but back-to-back cooking contests for the majority of the run time. In my review of the previous series, I highlighted these sections as being the best part of the whole experience, but too much of a good thing can be bad, and this sentiment is applicable here. Watching them back-to-back, the formula starts to wear out its welcome fairly quickly, and a few episodes in, I was beginning to get a little bored. In Season 1, these battles were spaced out, making each one more impactful, not to mention giving the audience room to breath, which you don’t get here, save a couple of exceptions. This isn’t to say the battles themselves aren’t as well executed as before, far from it, but there’s only so many overly long, jargon-filled food critiques I can really take in one sitting, even if it is given a thin veil of comedy and fan service to make it easier to stomach. Flashback scenes that give characters a little bit of fleshing out occur sometimes during battles, often at the end, yet it still isn’t enough. 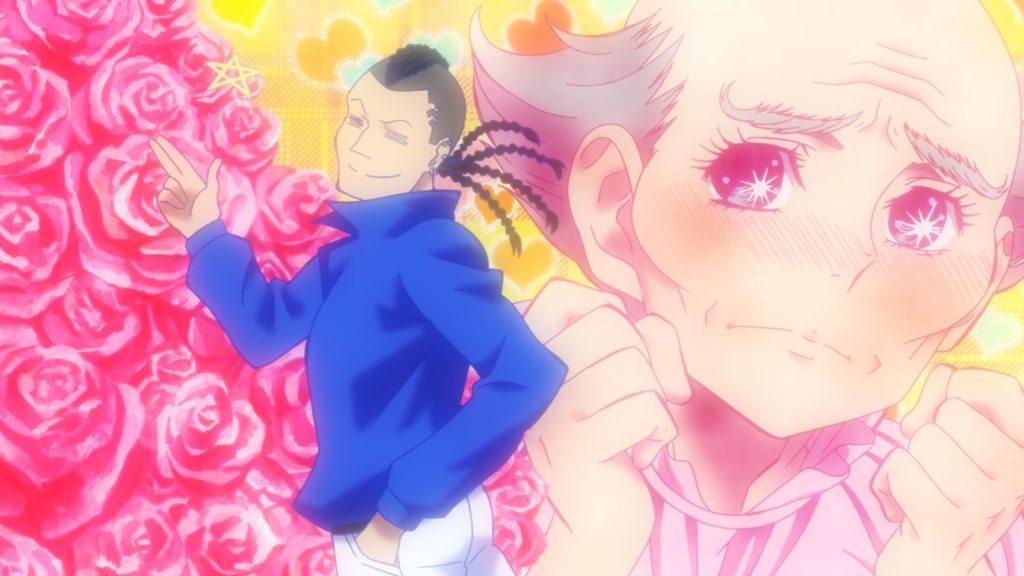 Much like last time, I found the most riveting of the battle sequences to be the ones that don’t include the protagonist Soma. Given he is the lead in a shonen anime, it’s pretty obvious that he’s going to win almost every match, and even when he doesn’t, you can predict that too, however there isn’t a lot you can do about that given conventions of the genre and the plot needing to move forward. This is why the other characters’ battles are so far more fun, because you feel they really could go either way. Speaking of the characters, the cast in The Second Plate remains just as likeable and fun as last time, and are the main driving force that keeps you watching during the repetitive arc. This season, we see the introduction of the first clear antagonist in Food Wars in the form of Subaru Mimasaka. Sure, we’ve seen rivals Soma has had to defeat to progress in the past before, but none that I can recall that had actual malice such as this. He makes for a decent villain, providing Soma with a good amount of threat, even if he doesn’t stick around for long. 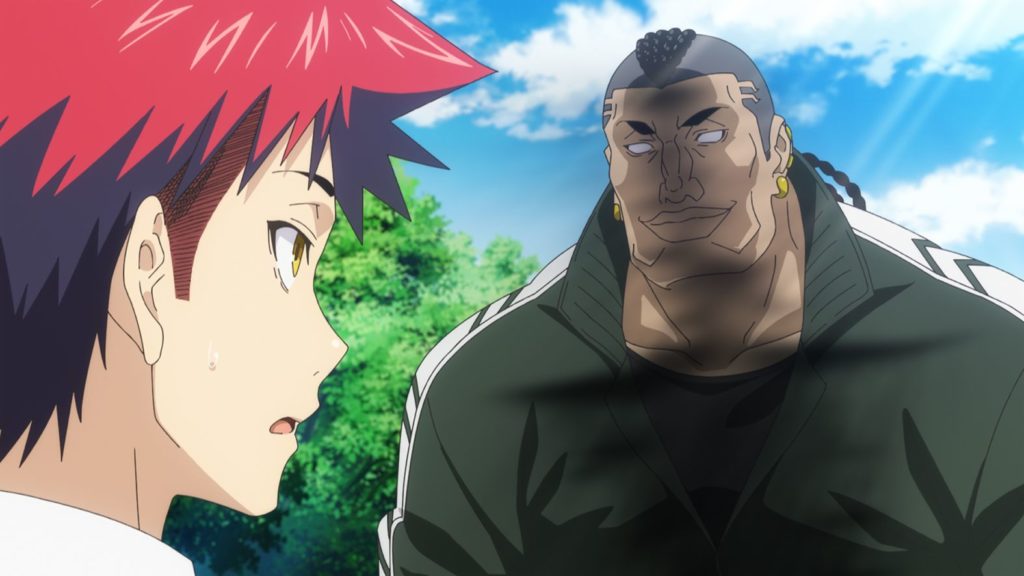 Although I was pretty down on the Autumn Election plot on the whole, the shining beacon at the end of the tunnel of The Second Plate comes in the form of the last three episodes, which form the Stagiaire Arc. This second, shorter arc is far more enjoyable, at least to me, than the ten episodes that precede it, putting the characters in new situations as they take on work experience roles in professional restaurants. Not only does it make for a refreshing change of pace from the over-abundance of battles, it is here where the cast truly seem to change and evolve from their new experiences, in particular Hisako, who has never had as much focus before. These episodes also contain a bit more Megumi, who is one of my favourites, yet has been largely shunted to the side now, despite a prominent role before. It’s a shame this part of the anime is so short whilst the Autumn Election is way too long, as we see just a few brief glimpses of the many students in their work environments, with just Soma, Hisako, Erina and Megumi getting any significant screen time, despite there being a ton of potential here to showcase everyone’s development. 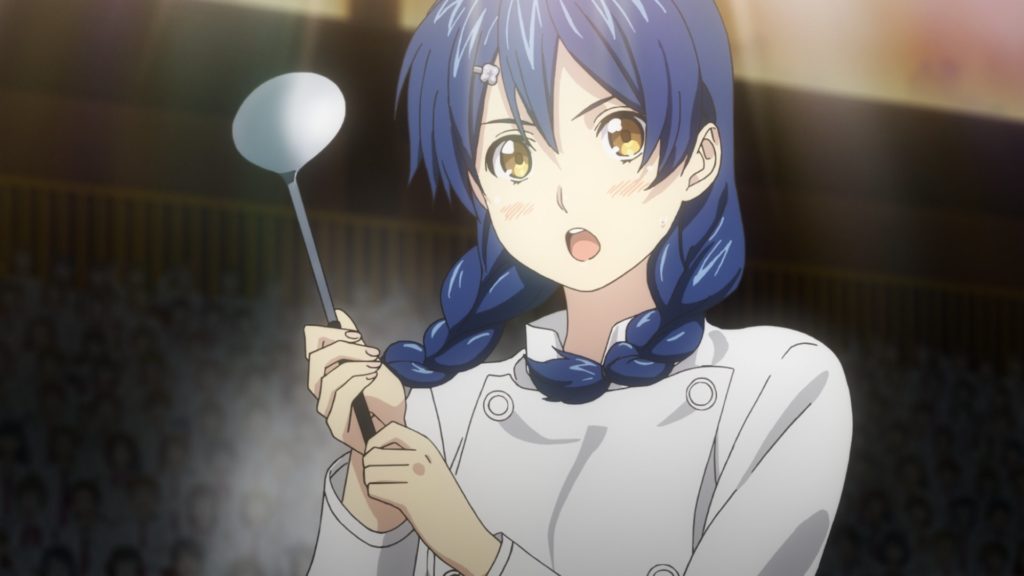 As previously mentioned, the animation and general presentation on display here is as strong as ever, with J.C. Staff returning to once again make watching Food Wars a mouthwatering experience, with food that looks good enough to eat, an important aspect in a cooking anime. The outlandish tasting scenes also remain very creative, to put it mildly, and you can tell this is where the animation team were having the most fun, and that almost certainly transfers on to the audience. 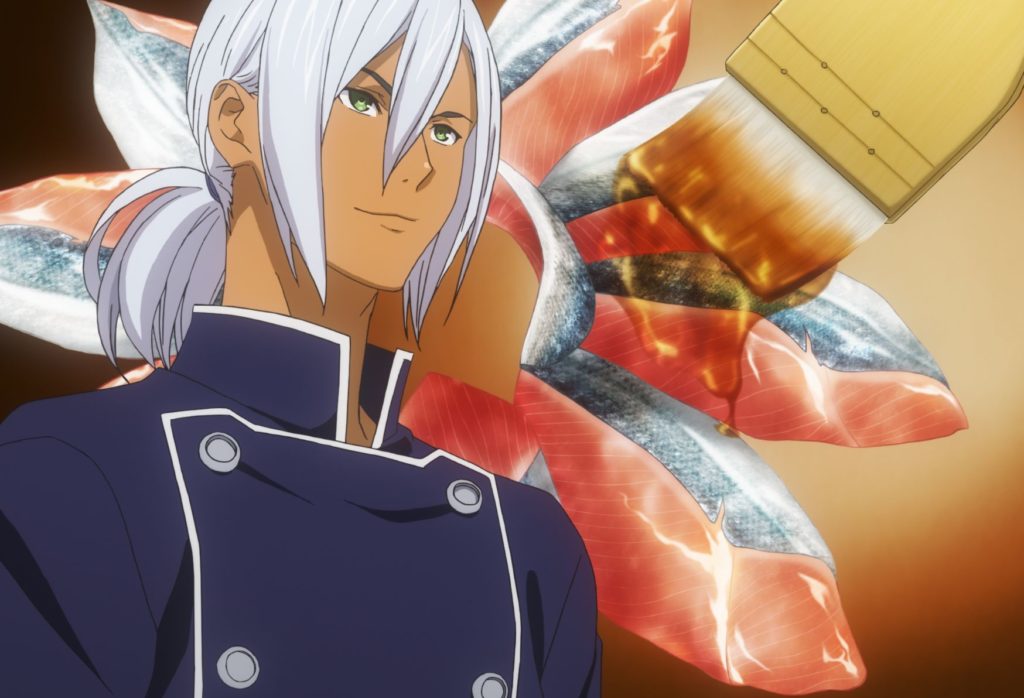 Since this was my second viewing of Food Wars: The Second Plate, I decided to opt for the dub, which I only heard a little of before, to see how it fared. On the whole, it is a pretty good effort from Sentai Filmworks, who can be pretty hit or miss, but there is one single glaring issue, and that is the voice of Erina. I’m not blaming the voice actress for this at all, Stephanie Wittels does as good a job as could be expected with the material she has, my issue is with the direction. For some reason, infamous producer of sub-par dubs Kyle Jones decided Erina should have this stereotypical ‘valley-girl’ accent that is both unfitting for the character and extremely obnoxious to boot. Luckily, this is the sole bad aspect, with the voices of Megumi and Soma, Jad Saxton and Blake Shepard respectively, doing pretty great. Musically, the franchise stays strong too, with a stellar score from returning composer Tatsuya Katou, and good, if a little standard by genre standards, OP and EDs from SCREEN mode and nano.RIPE.

A step down from the first season, Food Wars: The Second Plate still manages to squeak by on the quality of its cast and presentation, despite the repetitive structure outside of the final three episodes. 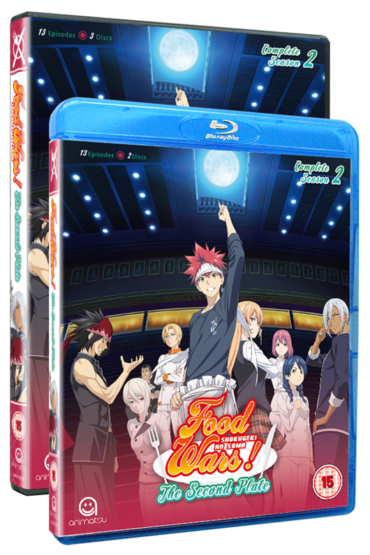 Hiyori Iki is a kind-hearted high school girl whose selfless nature nearly leads to her death as she pushes a young man chasing after a cat out of the path of an oncoming bus. Luckily (?) for her, the young man happens to be Yato, a minor god, or kami, who, down on his luck, … Continued

A fun and fresh take on the shounen genre, Food Wars serves up one of the most entertaining and enjoyable anime experiences in recent memory.

In a land ruled by a corrupt government and saturated by despicable evil, there stands one light in the sea of darkness, the fearsome and powerful Night Raid! Akame Ga Kill is a 24 episode action-packed blood bath animated by Studio White Fox in 2014. The series (based on the manga of the same name) … Continued

The manga series Parasyte (Hitoshi Awaaki) was launched in 1988 and concluded in 1995. Twenty years after finishing its run in afternoon magazine Parasyte was finally awarded its own anime adaptation by studio Madhouse with Shimizu Kenichi as director. Modern-day Tokyo has been hit with an epidemic. Strange creatures known as parasites have invaded and have taken over … Continued

Episodes 1-7 (Streaming on Crunchyroll) “Man cannot live by bread alone; he must have peanut butter.” – James A. Garfield  If the stereotypes of the Far East are anything to go by, then this article should be amusing to any Japanese people who might be reading: a piece concerning food, written by someone from England, … Continued