Ever since childhood, fifteen-year-old Souma Yukihira has been an aspiring cook, helping out his father, Jouichirou, as a sous chef in their family-run restaurant. Throughout the years, Souma has developed a passion for entertaining the patrons with his creative, skilled and impressive culinary creations, and dreams to someday take ownership of his family’s restaurant as the head chef. Suddenly, Jouichirou closes the restaurant in order to pursue work overseas, deciding to send his son to the prestigious Tohtsuki Culinary Academy, an elite school with only a 10% graduation rate that is famous for its ‘food wars’, intense, high-stakes cooking showdowns. As Souma and his new school friends adapt to the extreme lifestyle at the Academy, his years of training under his father will be put to the test. 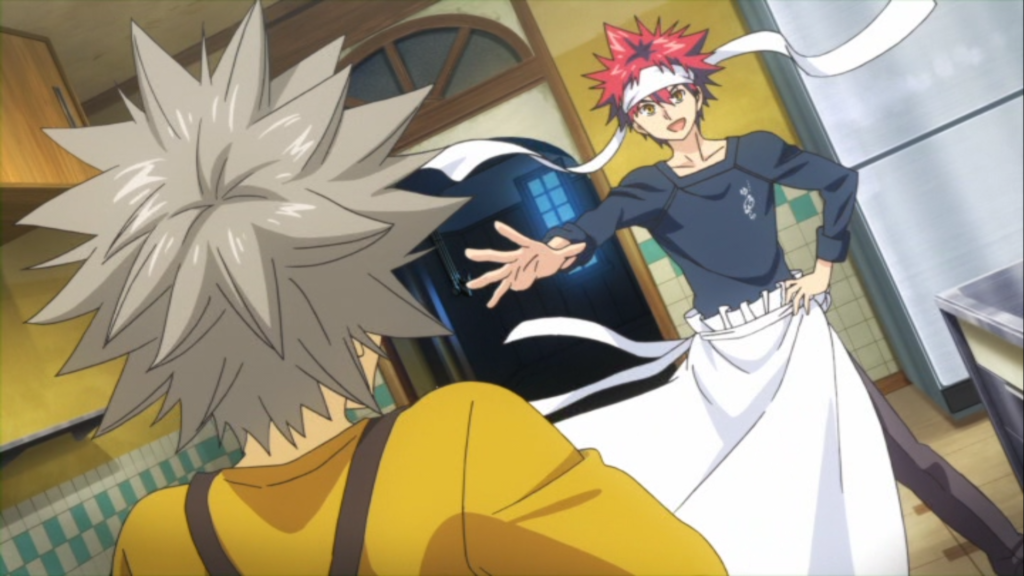 One of the true hallmarks of a great anime is the ability to take a subject matter that the majority of the audience will have little interest in and hook them in regardless. Great examples are shows like Sound! Euphonium, which took a high school concert band club and made it an unexpectedly intense and gripping Slice-of-Life, or Spice and Wolf which somehow managed to make a show all about accounting and the economy into one of the most heartfelt and delightful romances ever put to screen. It is this transformation of the largely uninteresting into something entertaining that truly makes Food Wars, based upon the manga by Shun Saeki, Yuuto Tsukuda and Yuki Morisaki, very much worth watching. 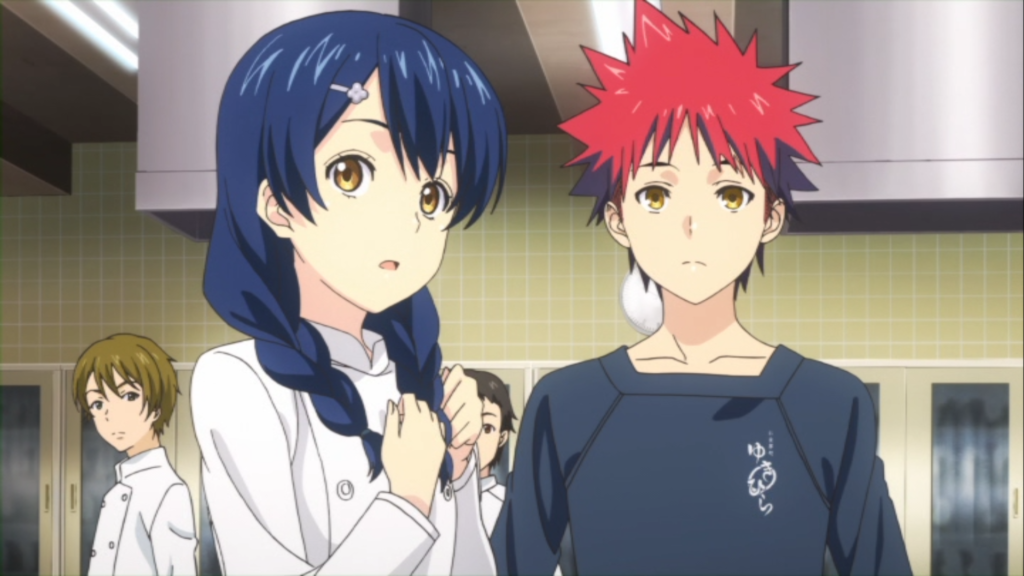 For the longest time, I actually avoided watching Food Wars purely because the subject of cookery isn’t exactly one I hold any enthusiasm for, despite all of the acclaim the franchise had garnered from critics. However, after watching it, it’s not hard to see why it has had so much success, and a lot of it is down to the way the subject matter is presented, taking the relatively mundane act of cooking and imbuing it with crazy amounts of energy. Despite the premise, Food Wars is still a shounen series in the same vein as Dragon Ball Z, Hunter x Hunter or Fullmetal Alchemist, and as such, the presentation of the cooking sequences are akin to the action scenes in those shows, with a variety of different angles and a fast editing rhythm, making for a ridiculously engaging and entertaining watch. To add to this, there is also the taste-testing portions, which feature whenever anyone eats any of the dishes, and show some of the most bizarre yet hilarious imagery I think I’ve seen in an anime, providing the audience with visual metaphors for what the person eating the food is experiencing. Whilst on a surface level it may appear as if they’re only there for comedy, these actually serve another important purpose in conveying the quality of the food, as the viewer obviously can’t taste what the characters are eating. These parts do include some fan service, but the use of it is creative and the scenes are sparse enough to where I can give it a pass, as it rarely feels distracting due to how these scenes are isolated from the rest of the show due to their abstract context. 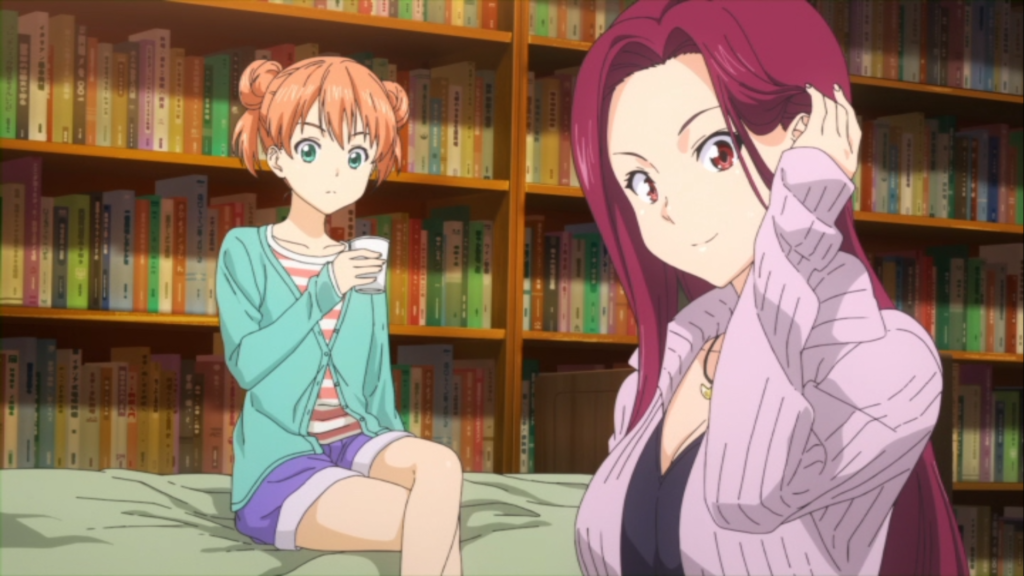 On top of the presentation, contributing to the overall quality of the series is definitely its highly likable cast of characters. The protagonist, Souma, is an incredibly charismatic and charming lead, whose enthusiasm towards cooking is genuinely infectious, but is also given some subtle depth through his relationship with his Dad. Megumi, the female lead and secondary protagonist, is excellent too, being the polar opposite to Souma and acting as his foil throughout the show, trying to become successful in order to make her small country village proud of her, a struggle which makes her character incredibly endearing. As well as those two, Food Wars has a colourful array of side characters, and whilst most lack any depth, they are at least memorable. The only real let-down character-wise is Erina, a top student at the academy, as it’s hinted that there’s more to her than initially meets the eye, but her appearances are few and far between and she rarely interacts with Souma and Megumi. However, given the fact there are another two seasons and potentially more after that, given the manga it’s based on is still ongoing, there’s a good chance that will come later, so I can forgive it. 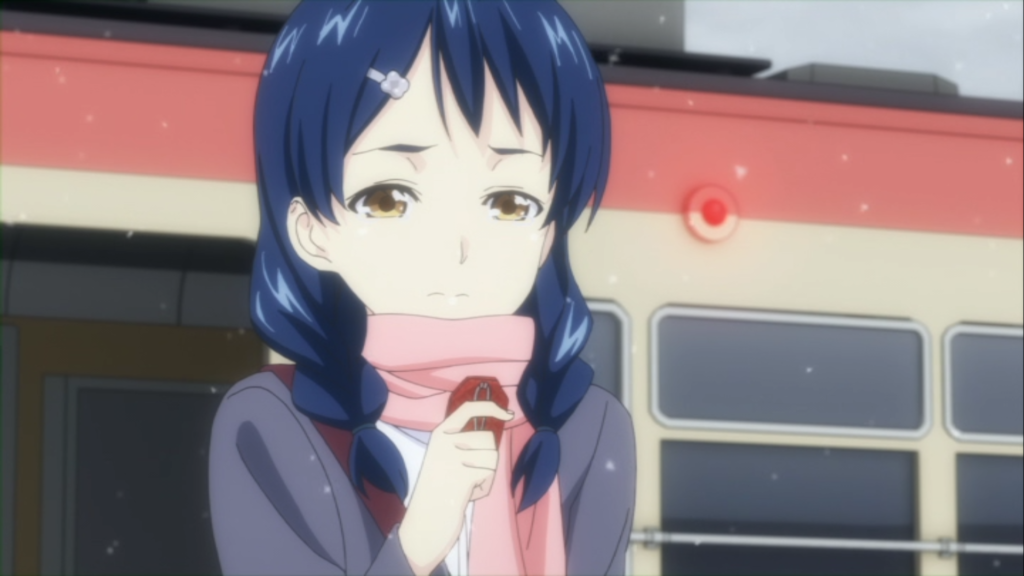 Whilst it’s hard to deny the sheer entertainment value Food Wars presents on a per episode basis, that’s not to say that it doesn’t have flaws. The biggest issue I take by a large margin is with how powerful Souma is. Apart from a single instance, Souma never runs into any sort of issues, always managing to ace all of the challenges without so much as a hint of failure. Although a convention of the shounen genre (and fiction in general) is to have the lead characters triumph over their opponents, it’s fairly rare that they start off as powerful as the finish. The characters always have to struggle and train in order to become the best and to achieve their goals, and despite the fact they win in the end, they don’t win every single fight, which is where Food Wars fails. Due to this, there is an absolute lack of tension throughout. There is an exception to this, which is when Megumi takes the spotlight, and personally I thought the parts where she takes centre stage are far better than when the show is about Souma instead. Another complaint I have is the somewhat slow pacing at the start of the series, with story feeling a little aimless for the first eight or so episodes, but this is fixed before the halfway mark, so it isn’t really a huge issue. 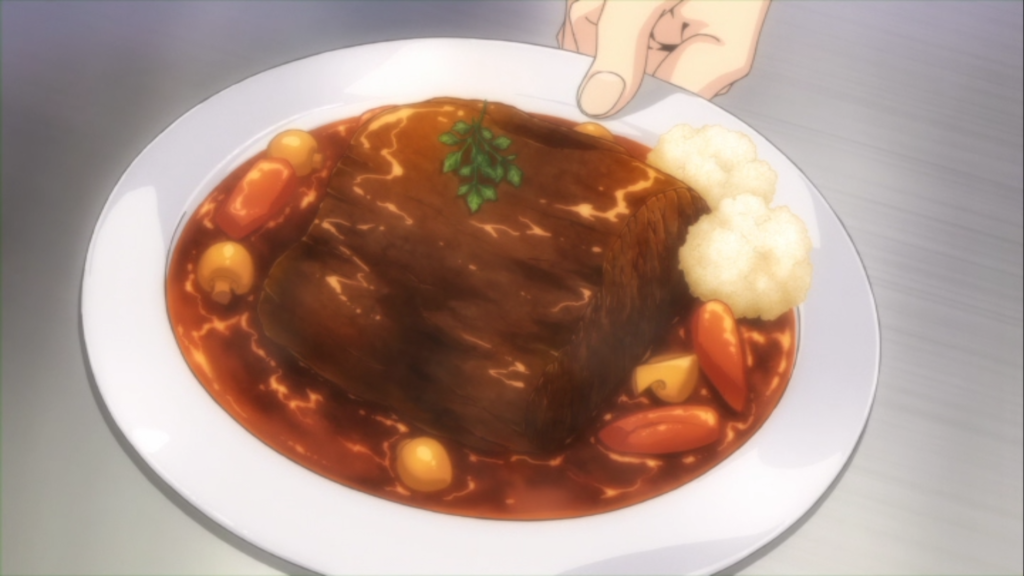 As you’d likely expect from an anime all about food, the look of said food is incredibly important, and J.C Staff (A Certain Scientific Railgun, Azumanga Daioh, Prison School) do a great job with it. Despite only being drawings, the dishes look mouthwateringly tasty and good enough to eat! The food is certainly the most well executed element of the animation, but that’s not to say the rest looks bad either, especially with the ‘foodgasm’ sequences that occur whenever any food is eaten, allowing the studio to stretch their creative legs a little, making these scenes equal parts inventive and funny. 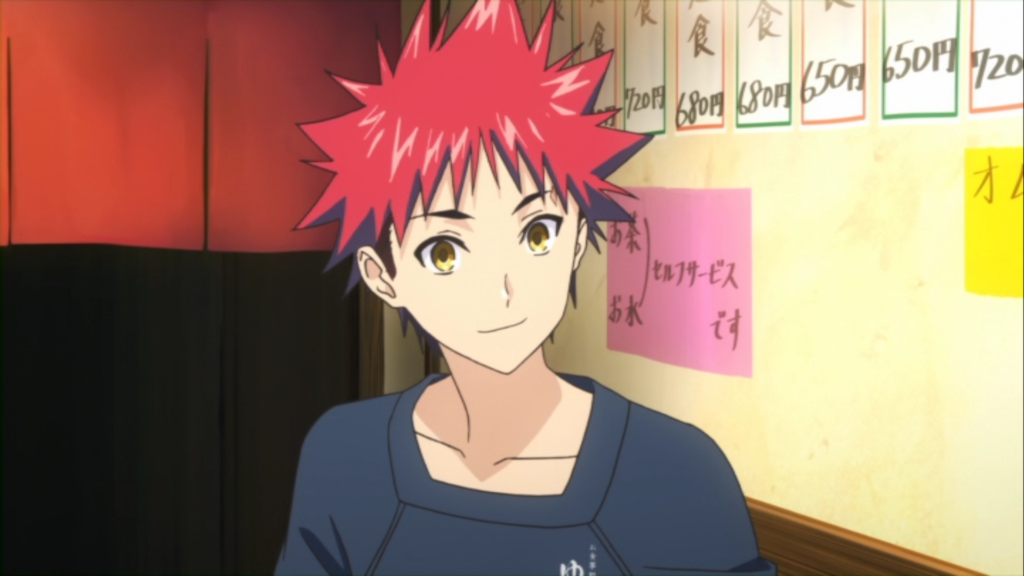 On the voice acting front, Animatsu’s release of Food Wars contains both English and Japanese language tracks and both are pretty good, which is surprising coming from a dub directed by the infamously poor Kyle Jones. Even though I did pick the Japanese language track over the English in the end, this was mostly down to the fact that the second season and upcoming third season won’t be dubbed for quite some time as opposed to the English dub’s quality, although, admittedly, I didn’t watch too much of it. I don’t think there are really any standouts but the Japanese track has a great cast, featuring voice actors such as Yoshitsugu Matsuoka in the lead role (Bell from Is It Wrong To Try and Pick Up Girls in a Dungeon?) and Minami Takahashi (Lucoa from Miss Kobayashi’s Dragon Maid) as Megumi. As for the music, I was fairly underwhelmed by Tatsuya Katou’s (Fate/kaleid liner Prisma Illya, Free: Iwatobi Swim Club) rather derivative score, with a couple of tracks sounding very familiar. Given that Food Wars is a two cour show, it has two different OPs and EDs, and it is a bit of a mixed bag. The first OP, ‘Kibou no Uta’ by ULTRA TOWER, doesn’t really work for this kind of anime, and feels a little too mellow, which is in sharp contrast to ‘Rising Rainbow’ by Miskokkasu, a more traditional rock song that does a far better job at pumping you up. Both of the EDs (‘Spice’ by Tokyo Karankoron and ‘Saachan no Sexy Curry’ by Seiko Oomori), whilst fun from a visual standpoint, are pretty mediocre musically.

As well as a standard edition DVD, Food Wars is also available as a Collector’s Edition Blu-ray for a limited time, which includes a Plastic O-card, Rigid Collector’s Box, Art Cards and Bonus Poster.

A fun and fresh take on the shounen genre, Food Wars serves up one of the most entertaining and enjoyable anime experiences in recent memory. 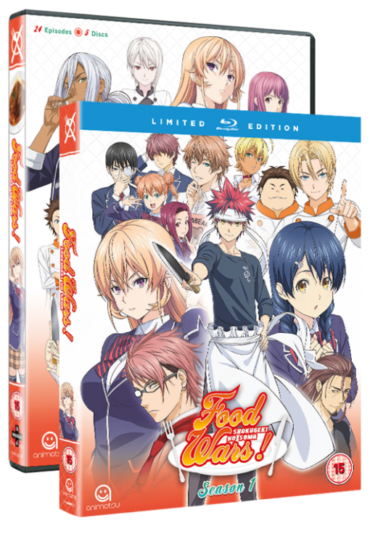 A step down from the first season, Food Wars: The Second Plate still manages to squeak by on the quality of its cast and presentation.