Award-winning animators Tsuneo Goda and Hirokazu Minegishi are travelling from Japan to the UK to give a talks at various events. They will be in London on the September 25 for a creators’ talk hosted by the Japan Foundation.

Here is the description from the Japan Foundation website: 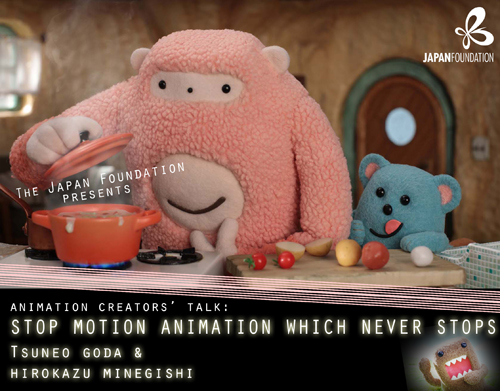 Tsuneo Goda is a Japanese animation creator best known for creating Domo, the lovable monster mascot of Japan’s biggest public broadcaster, NHK. Five years after the creation of Domo, Goda founded dwarf, an animation studio in Tokyo, specialising in stop-motion puppet animation and character design. Together with Hirokazu Minegishi, who was appointed lead animator on Domo, they have since created hundreds of characters and worked on the award-winning film series Komaneko.

For this special talk event, both Goda and Minegishi will present their epic character and animation work, in addition to other creations, revealing their ideas and the creative process behind them. Together with Abigail Addison, Co-Director of Animate Projects, they will discuss the reason for their on-going dedication to the painstaking work of hand crafted stop-motion animation when the world is turning more and more to CG, and how they bring their endearing and recognizable characters to life in TV series, films and music videos.

This is a fantastic opportunity for anybody who loves Japanese animation to hear two of Japan’s most popular and creative talent share their work.

With special thanks to NHK Cosmomedia Europe, a few lucky attendees will receive Domo goods!

The event takes place at the Curzon Soho on Tuesday 25 September from 18:30 to 20:30. It is free to attend but booking is essential. If you are interested, head over to the Eventbrite website to secure your places.

The two animators will then travel to Wales to give talks and workshops at the Kotatsu Japanese Animation Festival at the end of September. The  15th London International Animation Festival will take place at the Barbican between November 30th and December 09th. There will be forums, workshops and over 200 animated films done in a range of styles, techniques, and materials from hand drawn to paint on glass, collage and sculpture and CGI. There are a lot Japanese films on offer in … Continued