SPOILER ALERT: This is a review of a long-running series and does reveal details of past volumes.

As I am the man who reviews the anime releases of One Piece for AUKN, I thought it was time to review the latest in the print manga too.

This volume appears to be the penultimate edition in the current arc, which currently sees the Straw Hat Pirates in a battle with one of the Four Emperors: Big Mom. The battle, which is taking place along a range of food-based islands, is mainly over Sanji. The cook is being forced to marry the three-eyed Pudding (one of Big Mom’s daughters) against his will, with the rest of the pirates coming to his rescue. Well, I say “the rest” – Zoro, Usopp, Nico Robin and Franky don’t appear in this volume, but they are helped by Jimbei.

Currently, Big Mom has gone berserk due to the chaos caused by Luffy and his crew. This has been exacerbated by her hunger and as they are preparing for a wedding, she is demanding wedding cake. Sanji has thus secretly been making one with Pudding. Big Mom meanwhile is under the belief that the Straw Hats have her cake and is attacking the Thousand Sunny.

Meanwhile, Luffy is engaged in a fight with another of Big Mom’s children, Katakuri, a man whose Devil Fruit powers give his body the properties of mochi. The two are currently fighting in another realm that is linked with mirrors, with Luffy’s plan being to escape and take Sanji with him. Outside of this, Big Mom’s army are planning to have only one mirror for Luffy to escape from so that they can pour all their firepower into one area.

The action in this volume is split between the conflicts against Big Mom and Katakuri. Out of these, it is Big Mom that makes for the more interesting antagonist, given that her anger is bordering on insanity, and this is all over a massive cake. It makes for a bizarre spectacle as we see this furious, hungry woman trying desperately to grab some cake, like a psychopathic Mary Berry.

The fight between Luffy and Katakuri also reaches its conclusion and while the fight is overall less interesting than the conflict with Big Mom, due to the way that Luffy’s battles nearly always end out, we do get to see an interesting flashback about how he developed his “haki” skills, as well as a new form of his “Gear Four” which provides plenty of thrills.

Overall, though, you suspect the main elements in the arc are coming in the next volume of the story, which appears to be nearing its conclusion. 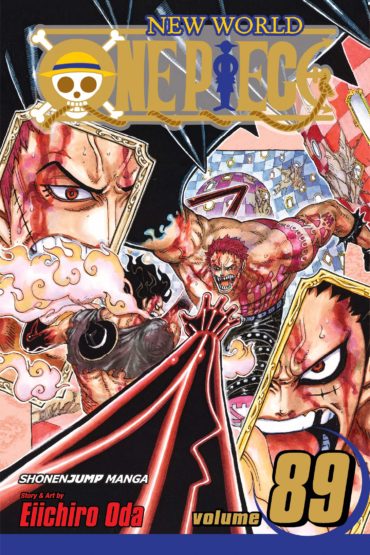