Ever since White Fox’s dark fantasy anime Re:Zero – Starting Life in Another World came to an end in September 2016, fans have been clamouring for a second season to continue the story of Tappei Nagatsuki’s popular light novel series. Their wait is almost over however, following an announcement on the franchise’s official website that a second TV anime series is in production! No broadcast date has been confirmed at this time, however.

While the staff of the second season were not revealed at time of the announcement, the following cast members have been confirmed as reprising their roles for the new season:
Yusuke Kobayashi (The Heroic Legend of Arslan) – Subaru
Rie Takahashi (Konosuba) – Emilia
Yumi Uchiyama (Nisekoi) – Puck
Inori Minase (The Anthem of the Heart) – Rem
Rie Murakawa (Little Witch Academia) – Ram
Satomi Arai (A Certain Magical Index) – Beatrice
Takehito Koyasu (Attack On Titan – Roswaal

Anime Limited have licensed the series for home video release in the United Kingdom, with the highly anticipated second half of the first season scheduled for a tentative Q2 2019 release. The first season is available for streaming on Crunchyroll, while Yen Press are publishing the original light novels in English.

Are you looking forward to more Re:Zero? 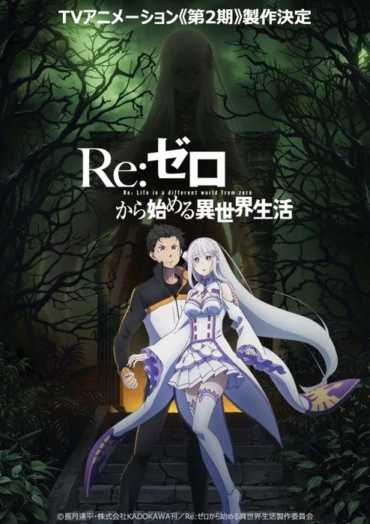 The second half of Re:ZERO offers a fascinating, engrossing watch as Subaru falls apart and then rises up anew. With a final arc that brings this first season to a wonderfully satisfying conclusion, Re:ZERO Part 2 will undoubtedly claim a piece of your heart.