Set in a post-apocalyptic world, Girls’ Last Tour follows two teenage girls, Chito and Yuuri, as they drive their Kettenkrad (a WWII-era German tracked motorcycle) around the ruins of a multi-layered mega-city. Told in an episodic style, the series spends its time showing us their struggle to survive in this post-war wasteland, all the while revelling in their curiosity at the world around them as they uncover lost temples, abandoned factories and military bases, and even a nuclear submarine. 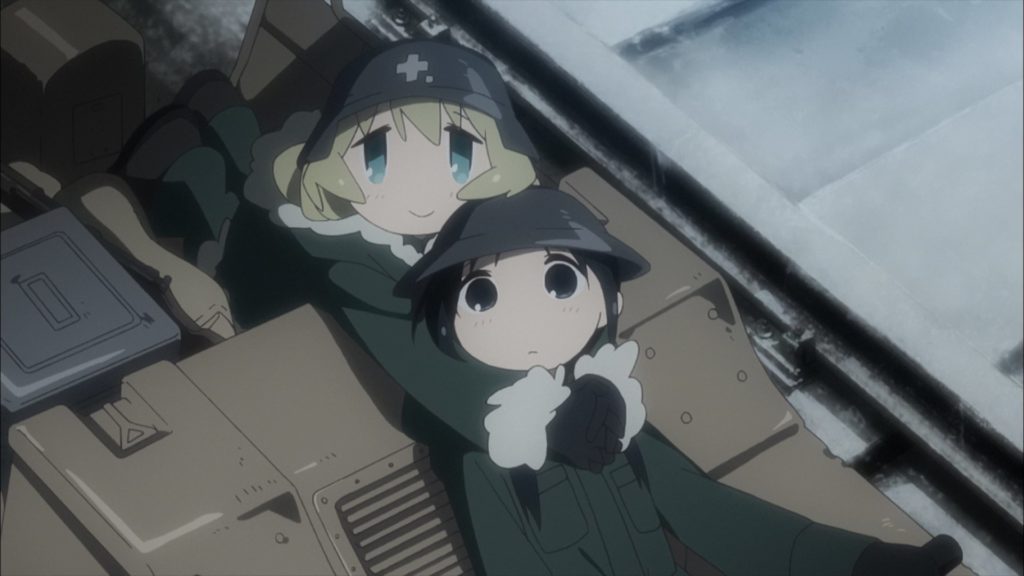 I’ve seen a lot of people compare this with Made in Abyss – and while you have clear similarities: putting two young characters in a hostile and unforgiving world and having to progress through its multiple layers, Girls’ Last Tour strikes a very different tone and style. While the former is a tale of adventure and discovery where the characters have a clear goal in mind, this is a survival story where there is no final destination. With the two of them seemingly being the last two humans in existence, the main threat is the crumbling world around them, as they could be crushed by falling debris, fall to their doom or be killed by starvation and hypothermia.

While the world being out to get them is very similar to Made in Abyss, it’s hard to feel that Chito and Yuuri are out of their comfort zone, as the anime’s pace and style is incredibly relaxed, placing it in a ‘comfy’ zone that makes it more akin to Laid Back Camp than anything else. It’s very slow and deliberate, particularly early on, as they trundle through a white winter wonderland, searching for rations and backed by an insert song that feels like it could have been sung by the Irish singer Enya, as it has that mystic and other-worldly feel that she is particularly known for. 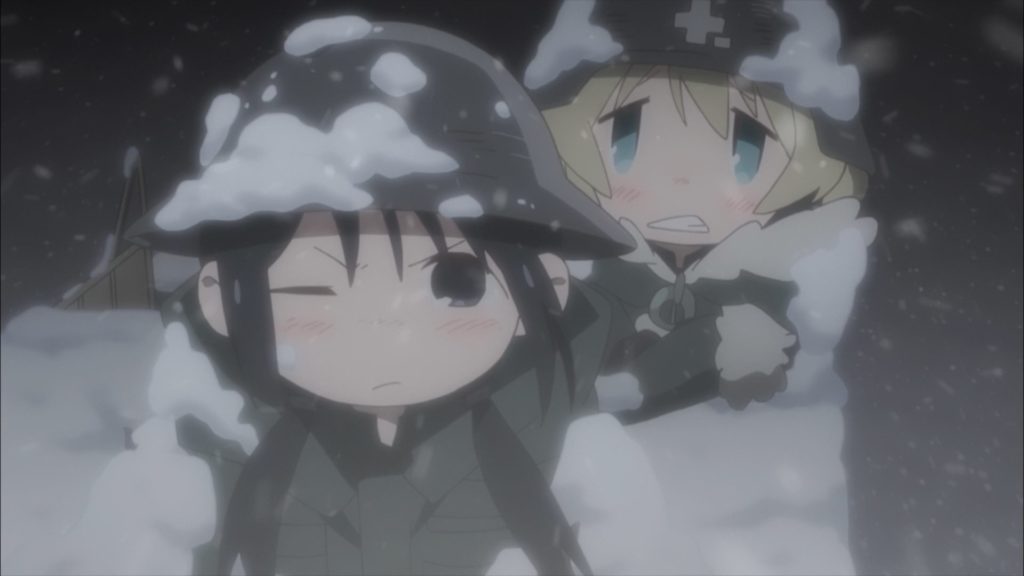 I did wonder if it was a bit too relaxing as, when there was not a lot was happening, it did threaten to send me to sleep, which makes me think some viewers will find this series boring, particularly as there isn’t much to the story. It really wants you to focus on the world, but it is sometimes so slow that I felt my attention drifting away from that and more onto Chito and Yuuri being a pair of idiots.

Chito is more learned and cautious than Yuuri, sometimes overly so and the majority of the comedy comes from juxtaposing her personality with Yuuri’s aptitude for getting them into trouble – being the more active and gung-ho of the pair, she often jumps headfirst into situations without thinking, producing some hilarious results. For example, one episode sets the pair next to a campfire with Chito talking about the importance of keeping history in books – to which Yuuri responds by throwing a book on the fire to use as fuel, having clearly not listened to a word her companion was saying. There’s also a running gag about a certain type of fish that they eat early on in the series; when they come across a living one in an abandoned fish farm, Yuuri obviously wants to eat it, but ends up saving it from a massive demolition robot instead.

It definitely thrives by treating the pair as a combination, with them being an interesting duo where one makes up for the other’s weaknesses; and without that there would come a point where they’d get totally stuck. But they pull each other through bit by bit and it’s really heart-warming to see them continually bond together as adventurers-in-arms. 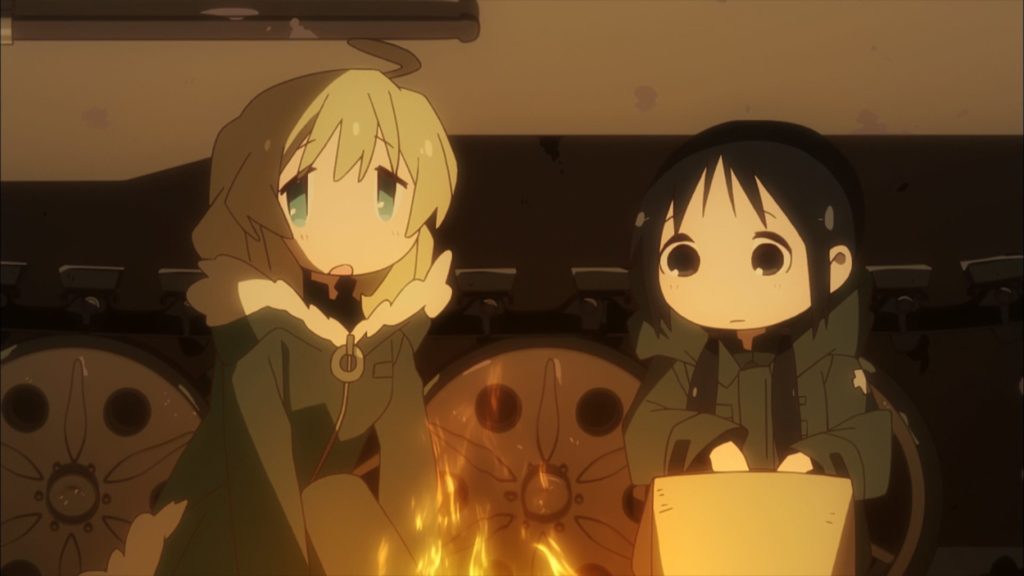 Seeing just the two of them travelling together can get a little lonely however, so it’s good that side characters do pop up from time to time. While a rare occurrence, as humanity has supposed to have annihilated itself, we do get to see Kanazawa, a wandering cartographer and photographer who hands Yuuri his camera after she becomes fascinated by it and Ishii, a woman who is trying to build a plane so she can fly over to the next neighbouring city. I found the side characters to be very endearing, and while I wish they had stayed around longer, they become special because the girls’ encounters with them are so fleeting. I really like Ishii’s story in particular as she feels so alive against the backdrop of the ruined city, and her tenacity and perseverance are really quite inspiring.

It’s when the third side character, Nuko, or Cut, so named because it’s a long white blob of a creature that looks kind-of like a cat but really isn’t, is introduced that the tone of the show changes from a lighthearted survival story to something much deeper, as you begin to realise that it has a very strong anti-war message at its heart. The cuteness on top that covers the series from top to bottom is very deceptive and hides away this darker core that the two main characters either don’t realise or don’t talk about; but as we see giant robots armed with deadly laser beams and a nuclear submarine complete with missiles, it becomes a lot clearer that the series’ core message is that massive wars are a really bad idea and if we’re not careful this post-apocalyptic fantasy might one day become reality. 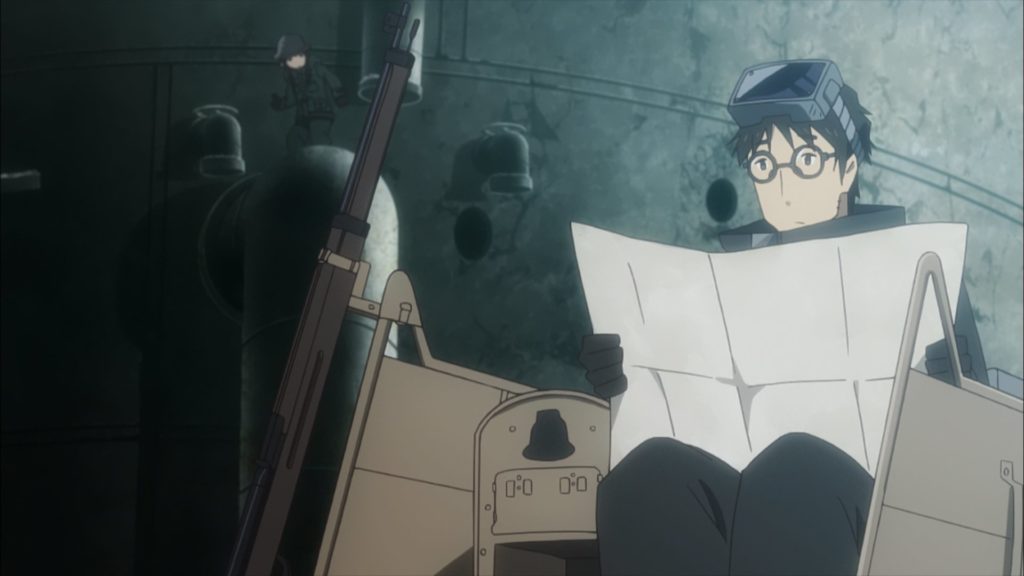 The deceptiveness is carried through the series’ art style, which directly adapts the manga’s purposefully cartoony look and feel. Chito and Yuuri’s big, round faces seem easy to animate and are very expressive, while their overall character designs are again deceptively cute despite the early-1900s German influence present in their uniforms. It’s clear a lot of research has gone into the designs, as clothing, weapons and vehicles are often based on the real ones that were used in the world war period.

While the show is inherently dark and monochromatic, it is still a pretty one to look at due to the depth and complexity of the scenery, and in how it is often very serene-looking despite the city being in ruins. It’s particularly effective in the way it uses light to change the tone of a scene, switching from fascinating to potentially frightening just by changing the time of day. 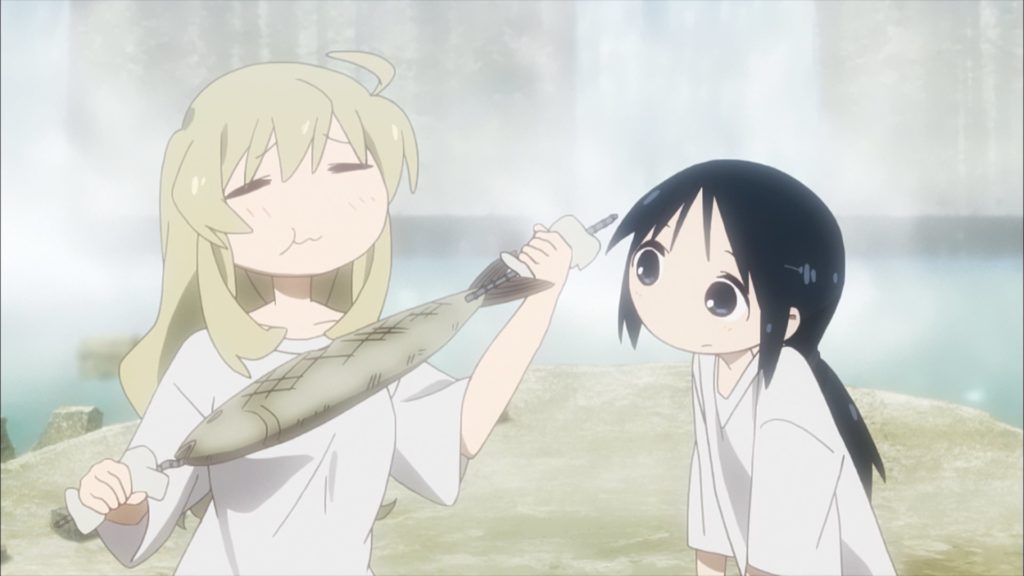 It’s greatest achievement however is its frankly incredible sound design. I was surprised with how realistic everything sounds, and I highly suspect that they recorded the real thing or as close as possible to it – the Kettenkrad engine, if not a real one, sounds realistic for the vehicle’s size; footsteps on steel floors sound like they’ve been recorded by Foley artists walking on real steel floors  and similarly flowing water and rain all sound real. It gives the series a lot of audible depth and does a lot for creating a believable and immersive world.

I mentioned one of the insert songs earlier in the review, but the soundtrack overall is very nice to listen to. You may recognise composer Kenichiro Suehiro from shows like Re:Zero, Comic Girls and Goblin Slayer, and this is definitely one of his best soundtracks as it feels like he really gets the tone of the series, with the music being particularly slow and relaxing, but at the same time carrying a lot of emotional weight. The opening theme “Ugoku, Ugoku” is also a proper bop and offsets the show’s relaxed tone with something a lot more upbeat, but still emphasises its healing nature.

The voice acting is also generally well-done whether you watch in English and Japanese, however I did find in both languages that Chito and Yuuri’s voices are a little too similar, and I think Yuuri’s more energetic and happy-go-lucky personality could have been brought out a bit more. 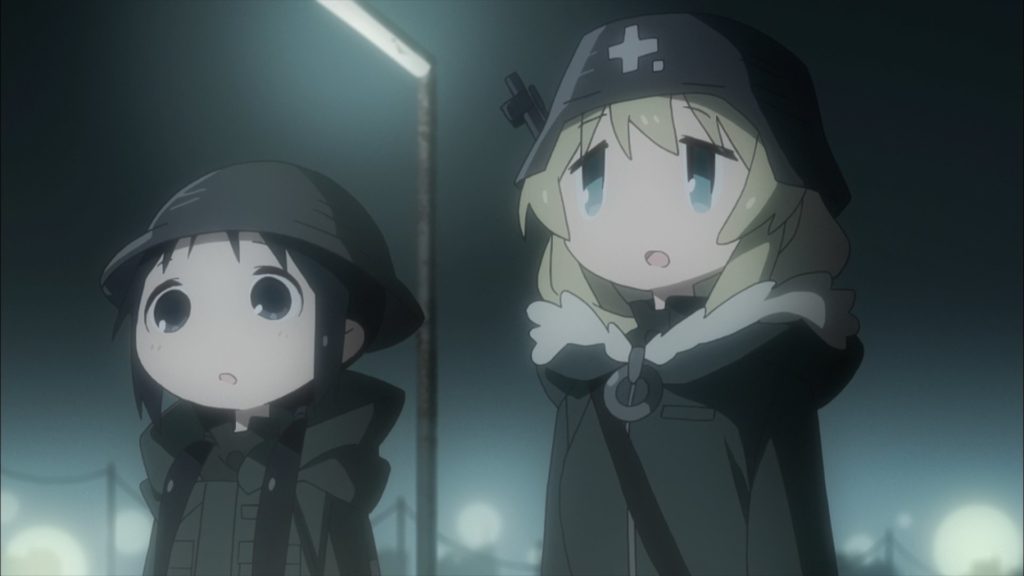 MVM’s limited edition Blu-ray of the series presents all 12 episodes in a very smart collector’s box with full wrap-around artwork. The barcode and BBFC rating are placed on the bottom of the box, meaning that they’re not going to be on show when you’re displaying this on your shelf. Included in the box is a booklet containing episode summaries, character profiles and an interview with the two Japanese voice actresses, Inori Minase and Yurika Kubo. There’s also a small, printed book containing the storyboards of the first episode. I would recommend not to read these until you have watched the series as they do contain spoilers. On-disc extras are slightly lacking, as we just have promos and trailers for the series, as well as the clean opening and ending. The bonus mini-episodes that were present in the Japanese releases are not included, however from what I can find out about them, they were fun little bonuses and in no way related to the story, so it’s unlikely anyone is going to miss them.

Overall, Girls’ Last Tour is a very relaxing survival story that generates a lot of appeal from its comfy styling and deceptively cute presentation. Its slow pace and slice-of-life sensibilities may seem boring to some, but if you look past that, the series shows an engaging deeper narrative with a strong anti-war message. 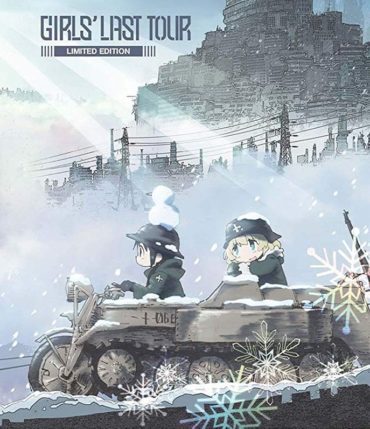 While it’s nothing special, Z/X Code Reunion is a fun but whimsical schoolgirl sci-fi action series, where being familiar with the original card game it’s based on doesn’t matter too much.

A short but brilliant sci-fi story with so many revelations it is hard to keep count.