‘Herein lie the Clow Cards. If their seal is broken, disaster will befall.’

One day, Sakura Kinomoto, a cheerful fourth-grader (ten years old) who loves to roller-skate to school, discovers a mysterious old book in her archaeologist father’s library. Opening the book releases magical spirits and the guardian beast on the cover: Kero – or Cerberus – a winged lion who (in chibi form). But now that the Clow Cards – created by Clow Reed, a powerful sorcerer – have been set free, she’ll have to become a Cardcaptor and capture them all or the spirits of the cards will wreak havoc on her home town. And so a magical girl is born…

We meet Sakura’s BFF Tomoya (who insists on recording all Sakura’s exploits on video and soon begins to create special outfits for her to wear on camera), Toya, Sakura’s annoying (in her eyes) big brother who is seven years her senior, and gentle-natured Yuki, his best friend, whom Sakura has a crush on. However we only get a tantalising glimpse of the person who is going to become very important in her life – and her rival in capturing the Clow Cards – on the last page of this volume.

Cardcaptor Sakura was one of the first magical girl series to make an impression in the West (albeit, for many of us, in a horribly mangled US version of the TV anime). So it’s good to find this well-loved series being kept in print with a glossy new collector’s edition – although you’ll need deep pockets to collect this version if it’s going to run to twelve volumes.

The freshness and verve of this enchanting series leap from the page – and even if the technology is dated, the charm of the characters has not faded with the passage of time and the story unfolds in a way guaranteed to make readers keep turning the pages. This is CLAMP at their best, before they moved the characters into a bewildering succession of parallel worlds in Tsubasa Reservoir Chronicle.

First published in 1996, the twelve volumes were brought out in English by TokyoPop in the early noughties – and then in a special omnibus edition by Dark Horse (reviewed by Darkstorm for Anime UK News in 2011). Now Kodansha (the original Japanese publisher) is issuing these collector’s editions, as well as the ongoing new Cardcaptor Sakura series Clear Card.  They seem (from my detective work) to be the Nakayoshi 60th Anniversary edition, in which the original twelve volumes have been reorganized into nine with new cover art by the four mangaka. (Nakayoshi is the Kodansha magazine in which the series first appeared.)

This handsome gold-embossed hardback collector’s edition from Kodansha is the latest version of the beloved magic girl series by CLAMP. But retailing at $29.99 per volume, how essential is it for collectors? Disappointments first: the only colour page, lovely as it is, is the same as the cover image – and I’d hoped for many more as well as extras (there are, to be fair, two pages of Translation Notes). A collectible card is included as well, but not a Clow Card; some sources suggest that it’s a part of a picture that when matched to the other collectible cards will, apparently, make a whole ‘new’ image – other sources that these are replicas of the phone cards issued at the time.

On the plus side, the extra-large format means the wonderful art by CLAMP can be appreciated and studied in detail and the high quality glossy white paper shows the panels off to their best advantage.

It isn’t entirely clear to what extent this translation has been altered for the new edition (without attempting a word-for-word comparison). Anita Sengupta was the translator for the original Tokyopop edition and she is credited here alongside Mika Onishi with Karen McGillicuddy named for ‘Additional Translation’.

In spite of these reservations, this handsome edition would make a splendid special gift for a fan – or a new reader to the series. 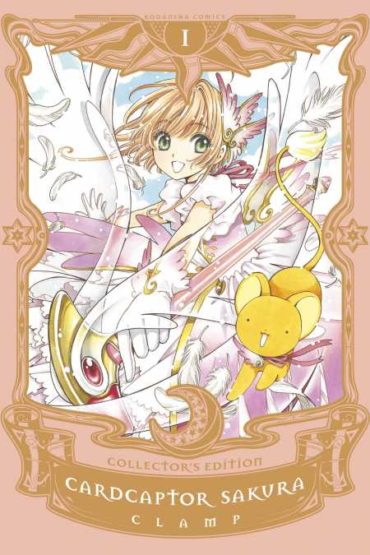